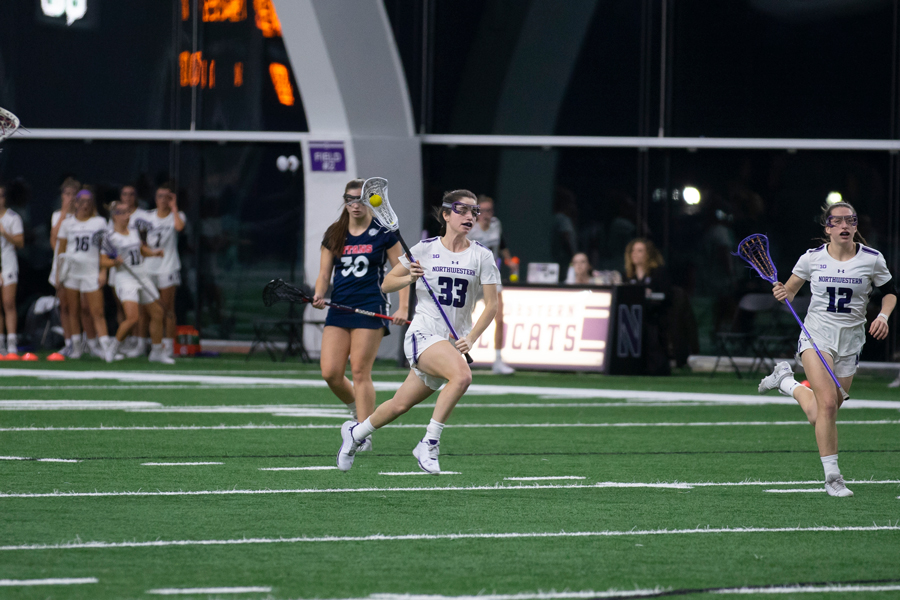 Brennan Dwyer moves down the field. The junior finished with a program-record 21 draw controls in Sunday’s win over Arizona State.

Junior midfielder Brennan Dwyer was disappointed with her performance in Northwestern’s 17-15 loss to No. 6 Notre Dame on Friday. So she responded Sunday by making history against Arizona State.

“I don’t think she felt she had her best performance Friday night,” coach Kelly Amonte Hiller said. “She was really motivated today to make things happen out there. She was really getting after it. Brennan was doing everything she could to put it where we needed it.”

Dwyer, an All-Big Ten selection in 2019 as a sophomore, dominated Arizona State early and fueled an early NU run. Dwyer won her first eight draws, and the Wildcats converted by scoring eight goals in the game’s first five minutes. With Dwyer and the Cats’ offense clicking on all cylinders, Arizona State couldn’t manage a single shot attempt during that stretch.

“She works so hard and the draw is obviously such an important part of the game,” junior attacker Lauren Gilbert said of her teammate. “When Brennan starts to get momentum, the whole team starts to get momentum. She has this calmness about her and we are all just so confident that she’s going to win the ball. She’s such an integral part of our team gaining momentum in games.”

The Sun Devils scored three straight goals in just over a minute to pull within five, but it would be the closest Arizona State would come to catching NU. By halftime, the Cats held a 23-7 lead, with a dominant 32-8 advantage in shot attempts and only two turnovers compared to Arizona State’s 11.

The scoring slowed down in the second half, as both the Cats and Sun Devils notched five goals in the second frame. Still, Amonte Hiller was impressed with her team’s ability to pick apart the Arizona State defense. Gilbert led NU with five goals and three assists, but she wasn’t the only one to light up the scoreboard — 14 different Cats found the net.

“They rebounded well,” Amonte Hiller said. “We were obviously not happy with our play on Friday night. I think we played our best, and that’s what we’re focusing in on — coming out and trying to be at our best and trying to improve and take advantage of this opportunity. It was a good team win. We had a lot of people contribute and make an impact.”

Even after making history and lifting the Cats’ to their third win of the season, Dwyer said her focus is on the road ahead and next Saturday’s opponent: No. 4 Syracuse.

“It’s not something that we’re going to go on a high and be like, ‘Oh my gosh, we’re so good, we have this one win,’” Dwyer said. “We’ll get back to work on Monday. We have a lot of preparation before Syracuse and we’ll work really hard this week.”