Local fashion boutiques struggle in the era of online shopping 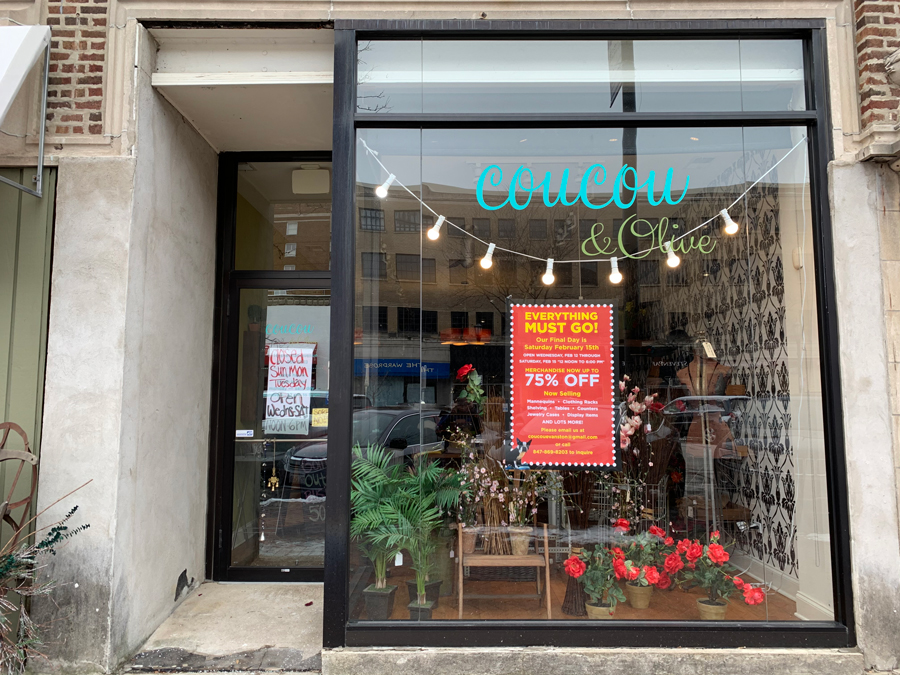 Coucou & Olive closed on Feb. 15. It sold apparel and other items.

Kellie Poulos, owner of Coucou & Olive, is a veteran proprietor in Downtown Evanston. She opened her first clothing and gift boutique, Asinamali, in the early ‘90s. It was before Amazon was founded, the World Wide Web was only a few years old and Poulos said the city was home to a plethora of mom-and-pop stores. The retail landscape was different than it is today, specifically for stores that sold apparel.

Factors like these contributed to Coucou & Olive closing its doors permanently Feb. 15.

“Local businesses closing marks the loss of community,” Poulos said. “Shopping at these little stores is a part of people’s routines, and it’s not the same if they can only go to Target.”

Poulos said she constantly evolved to meet customers’ needs while operating her boutiques. She founded Coucou & Olive in 2006, which was geared toward a more sophisticated clientele in contrast to Asinamali’s trendier crowd. She even experimented with a thrift store, Used, for a few months in 2013. With each store, Poulos catered to different audiences and sold unique merchandise.

Over time, however, Poulos said she began to hear customers talk about finding the items sold at Asinamali online and for a cheaper price. That boutique closed in 2014.

Annie Coakley, executive director of Downtown Evanston, said apparel shops closing, coupled with vacant storefronts on high-traffic streets like Sherman Avenue, is increasingly noticeable. Clothing stores such as francesca’s, Gap and dragonfly-df went out of business between 2018 and 2020, in addition to Coucou & Olive. Coakley said each closure has contributed to a declining selection of places to purchase apparel downtown.

Beyond the personalized care and expert knowledge lost when small boutiques close, Coakley said customers no longer get to experience human connection when they shop. Online shopping does not allow customers to talk to shop owners or get styled by staff members. Coakley said business owners in Evanston work to provide individualized service to clientele, something the Internet cannot offer.

Not all apparel stores, however, are suffering.

Witt also integrates social media, specifically Instagram, into her business model. She posts pictures of merchandise and tells the story of who made it. Witt tags the products featured in the posts and followers can click on the tags to be led to that item on the store’s website. Witt said Instagram not only drives e-commerce, but also people to visit Assembly Creators Market in person.

“People shop differently now,” Witt said. “In order for any retail store to exist, it needs to have more than one way to generate revenue.”

Assembly Creators Market is located next door to the space Market Fresh Books occupied until December 2019. Witt said the empty storefront is an “eyesore” on a prominent block.

To fill the vacant space and show that it has opportunity, Witt collaborated with Downtown Evanston and fashion boutiques in the area to create a window display. Participating shops include Assembly Creators Market, gigi BOTTEGA, Accents Plus, talia and Stepping Out on Faith.

“I wanted to curate something that reminds people of the great places to shop in Downtown Evanston,” said Witt. “This is a way to invite businesses to open in the area and show that nobody can stand alone anymore.”

Each window has mannequins that show off outfits and accessories from participating stores, and the display includes sketches of the storefronts by local artist Shruti Vijay.

Jim Nash, managing broker at Farnsworth Hill Inc., is the landlord for the 708 Church St. building. He said the building funds the cost of materials for the project. The display will be completed this week. After two months, the windows will be redecorated.

Angelica D’Costa, manager of gigi BOTTEGA, said the boutique is excited to be a part of the window display. The store opened in 2011 on Davis Street, but D’Costa said customers who live in Evanston often tell her they didn’t know it was there. She hopes the window display will draw attention to where apparel is sold downtown.

“You would think everyone would know about our boutique since we’re in the center of Downtown Evanston,” D’Costa said. “We are grateful for any exposure we can get.”

Since she opened Asinamali in 1992, Poulos said the definition of what it means to be a “good customer” has been redefined. Businesses cannot succeed if customers visit once in a while without making purchases.

“People need to spend their money in these little stores,” said Poulos. “That’s what allows owners to pay their rent, pay their employees and make a living.”