Urban coyotes? In Evanston, not so far-fetched 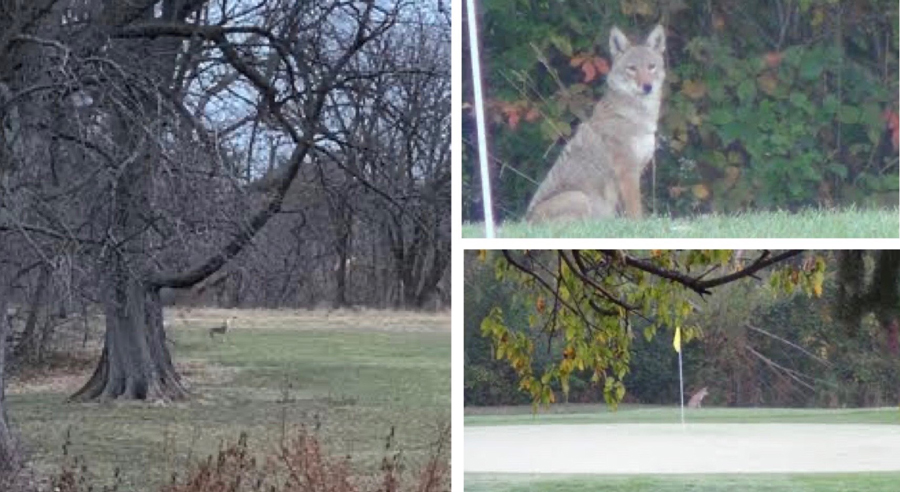 Coyotes Evanston resident Sue Gartzman has spotted near the Canal Shores Golf Course. An estimated 2,000 to 4,000 coyotes reside in Cook County, according to the Urban Coyote Research project.

A 5-year-old boy was hospitalized Jan. 8 after a coyote bit him near the Peggy Notebaert Nature Museum in Lincoln Park. The same day, a coyote bit a 32-year-old man walking on a sidewalk in Streeterville. But Pounds said incidents like these are remarkably rare. After around 20 years on the job, he said he’s only known of one person in the Chicago area attacked by a coyote.

“The media put something out there and has people walking on eggshells,” he said. “People tend to relate coyotes to wolves when they are not. They believe that they’re pack animals, they’re aggressive, they will attack. All of that is just false.”

An estimated 2,000 to 4,000 coyotes reside in Cook County, according to the Urban Coyote Research Project, a comprehensive study of coyotes in Chicago metropolitan areas initiated in 2000.

Sue and Howard Gartzman live near Evanston’s Canal Shores Golf Course and said they often encounter coyotes. Sometimes while walking their dog, they’ll spot a coyote lying on the green soaking up sun. Other times, they’ll hear howls as ambulances pass. Since the Gartzmans moved to Evanston in 2006, they said they hear coyotes howling monthly, and most recently spotted one animal earlier this month.

“It was around dusk, and there was one right behind our house about a hundred yards away,” Sue said. “It was just sort of plaintively screaming.”

Illinois Natural History Survey mammalogist Jean Mengelkoch said coyotes are habitat generalists, meaning they can adapt to diverse environments. Cook County’s forest preserves enable the animals to thrive in urban environments, and some, she added, have managed even to flourish in cemetaries.

To avoid potentially dangerous situations, Mengelkoch said people should keep their distance from coyotes, report animals behaving abnormally and refrain from leaving food outside. Leaving out food scraps, as well as dog and cat food, is what prevents coyotes from coexisting with humans, she said.

“People and coyotes have coexisted with pretty minimal problems,” Mengelkoch said. “For the most part, they’re going to stay away from people unless they become too acclimated, and that’s usually because of the feeding issue.”

Brandon Kulosa, the president of Animal Trackers Wildlife Company, a full-service residential and commercial wildlife removal company, said controlling coyote populations is especially difficult because the animals can traverse large areas of land in minimal time. Control methods authorized by the state of Illinois include trapping, sharpshooting and tranquilizing. Still, he estimated that 80 to 90 percent of the calls he receives pertain to non-threatening coyotes.

Pounds said people should realize that attacks are unlikely and instead learn to live in harmony with urban coyotes.

“A lot of people want them gone, but you got to realize that they’re not invading your space, we’re invading theirs,” Pounds said. “Everytime you bulldoze and knock down a wooded area to build more homes or buildings, these coyotes don’t evaporate and disappear — they have to move into the urban areas. They have to adapt and learn to live with what we’re giving them.”