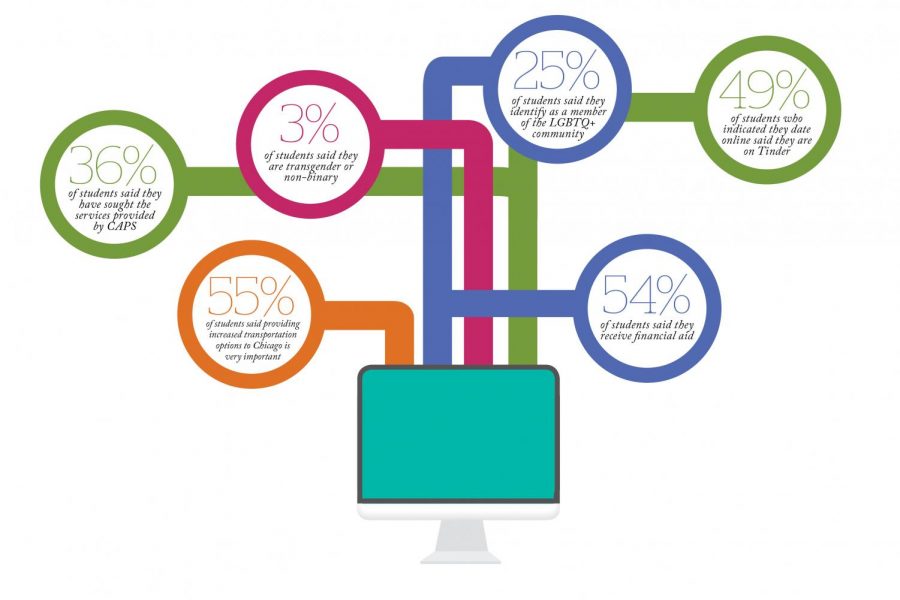 How much of the population receives financial aid? How do students think about what the University should do to increase sustainability? What percentage of students use dating apps and which ones? Associated Student Government’s annual analytics survey can provide answers to those questions from a student perspective.

“It is the only widely distributed survey that tries to capture every sort of variation of the student experience,” Katherine Conte, ASG’s chair of analytics and SESP junior, said.

While the University gives exit surveys to seniors, ASG’s analytics survey seeks information about the campus community as well as proposes institutional improvements that speak for student interests, Conte said.

Every year, ASG meets with campus organizations to draft questions particularly pertinent to student lives. The student government’s analytics committee then drafts and administers the campus-wide survey, and the results are compiled into budget proposals for meetings with the University.

At 1,359 responses, the analytics survey also experienced an increase from last year’s survey, which accrued 1,236 responses, Conte said. The committee made the survey available to take on mobile devices, removed questions that required math and promoted it through mass emails.

Another difference in the survey since last year is that there was a focus on student organizations, she said. The committee inserted questions about student leadership and what percent of time students put into outside organizations.

In addition, 24.56 percent indicated they identified as LGBTQ, a slight increase from the 22.7 percent reported in last year’s survey, Conte said.

Other notable results included student perceptions of marginalization on campus. Of those surveyed, 39.41 percent responded “disagree” or “strongly disagree” to the statement “I have never felt marginalized at Northwestern due to race, gender, sexual orientation, ability status, ethnicity, nationality, socioeconomic status or religion.” The top three reasons for feeling marginalized on campus were socioeconomic status at 23.5 percent, gender at 19.9 percent and race at 17.5 percent.

The most heavily-voted setting for where they experienced marginalization was “classrooms or other academic settings,” followed by “student organizations” and “Greek Life.”

Almost a fourth of respondents also said they were low-income students and 54 percent of overall respondents indicated they received financial aid from the University.

Over a third of those surveyed indicated they sought out Counseling and Psychological Services, at 35.94 percent. Almost half of the students indicated the outcome of their CAPS treatment was receiving referrals to outside care professionals.

Conversely, 10.54 percent of the respondents said they received adequate treatment and a combined 22.04 percent indicated that the wait time for an initial consultation or ongoing therapy was too long, so they did not follow through.

Of those who responded they did not receive beneficial mental healthcare through CAPS, over a third said “the wait was too long” and over a fourth said the counseling “did not adequately address my concerns or needs.”

A majority of students surveyed somewhat agreed that they committed to sustainable practices in their daily lives, including recycling, reducing waste and more.

Of those surveyed, 94.89 percent indicated they did not own a Juul or vape — though the statistic may not be representative due to response bias.

The most popular dating apps among those with online dating profiles? The survey answered — Tinder.

Conte said ASG sought to increase student interests through questions about the lives of other students in the Northwestern community.

“Part of my goal specifically was getting more engagement in the results and more interests in what other students think,” Conte said. “(Statistics about student lifestyles are) data that students I think people find interesting to look at because that’s just generally just fun things.”

Through the results of the analytics survey, ASG has been able to successfully advocate increasing funding to support students in continuing their extracurricular endeavors.

Rushmin Khazanchi, a member of the ASG analytics committee and Weinberg junior, said he was passionate about access to opportunity on campus.

“Regardless of your background, or your socioeconomic status, gender, religion, I think you should have the opportunity to engage with as many things as possible,” he said.

Khazanchi, who was a part of the committee last year, said he found students from lower-income backgrounds were experiencing difficulty participating in extracurriculars or clubs on campus due to obligations in their work studies.

Even though 26.16 percent of students who identified as low-income or first-generation said they did not receive the necessary resources to partake in extracurricular activities, nearly half agreed that they did. A large number of students also said they devote between 1 to 5 hours per week to these organizations, and 61.26 said they held leadership positions.

Using the statistics, he said ASG was able to successfully petition the University to consider a student leader stipend that supplements their income, provided they show financial need and are in work studies, he said.

ASG recently received news that the University approved it and plans to meet with interim vice president Julie Payne-Kirchmeyer to discuss funding strategies.

Students agree on rooms for improvement

“What I really value in this process is that there are a lot of issues on campus that are kind of actual real-world issues,” Ben Major, Weinberg sophomore and member of the ASG analytics committee, said. “We have an administration that we can petition but there seems to be a disconnect between what they decide and what the students really want.”

Looking forward, ASG officials said upon assessment of the results, they will focus on potentially improving mental healthcare, Books for Cats and transportation into Chicago.

To a question that asked if improving mental health services was necessary, 57.36 percent indicated it was “very important.” Comparably, 55.47 percent said it was also very important to provide increased transportation options to Chicago.

Last year, ASG was able to lobby for $65,000 more in funding for Books for Cats. In addition, they presented about 10 different proposals than span in monetary value from $20,000 to $120,000. The committee will present budget recommendations in early March.

Major said the survey speaks for students as a whole to express needs for necessary changes on campus, and that “teases out” information from students by asking specific questions.

“How do students feel?” Major said. “Somebody needs to ask them.”