Letter to the Editor: Call for NU to boycott China counterproductive and unjustified 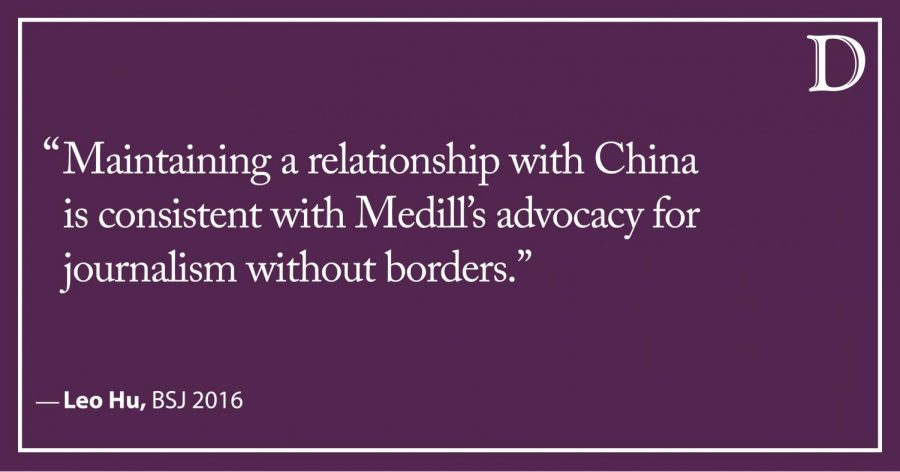 Last Sunday, The Daily published a letter to the editor called “Medill Should Boycott China for Press Violations.” Citing various human rights violations regarding China’s treatment of journalists, the letter criticized the Medill School of Journalism, Media, Integrated Marketing Communications for sending its students on class trips to China.

Programs like these, the letter contends, make Northwestern a “passive partner” to China’s human rights abuses. It claims only by severing all ties with China would Northwestern avoid corrupting its moral obligations with economic interests. While there are legitimate concerns with the Chinese government’s human rights record, the author’s call for such extreme measures is unjustified and counterproductive.

China is more than its government. Sending students to China on short-term, faculty-led programs by no means indicates the University condones any of China’s state actions or policies. On the contrary, through the Medill News Service in Washington, D.C., Medill has been a dedicated watchdog of the Chinese government, routinely reporting and criticizing the country’s behavior when inconsistent with the values of liberal democracy. Through these short-term programs, Medill merely provides students with the option to visit China for their own academic and career benefits. It is, and has been, entirely possible for Northwestern to maintain a strong academic partnership with Chinese institutions without compromising its core values.

Maintaining a relationship with China is consistent with Medill’s advocacy for journalism without borders. China is an inextricable player in global affairs. Medill prides itself on educating some of the best journalists in the world, whose professional responsibilities require learning about other societies and cultures. Class trips to China allow Medill students to gain first-hand knowledge of its people, language, history and culture. This experience remains crucial for a better understanding of any issues related to China.

If Northwestern is dedicated to human rights advocacy, Medill should encourage more students to visit China because it is often the journalists who uncover human rights abuses around the world. In fact, Medill has cultivated some of the most brilliant and courageous journalists who earned global recognition for reporting on sensitive topics. Medill’s status as a top journalism school would be questioned should it turn its students away from such endeavors.

Severing all ties between the University and China would not abridge the existing political differences between the two governments but rather deprive students on either side of the opportunities to learn from the other. From research collaborations to study abroad programs, the University has constructed a pathway for students and scholars from both sides to come together for a common pursuit. Through these exchanges, both sides form a mutual understanding, respect and appreciation notwithstanding the enduring political differences. Decoupling with China not only runs contrary to the University’s mission of fostering a diverse and global academic community, but also feeds to the ignorance and prejudice that further divide the two nations.

Finally, the idea of boycotting China contributes to a growing Sinophobic rhetoric in the United States that is fueled by nothing but fear and prejudice. This is especially alarming today, as Chinese nationals living abroad have increasingly become the targets of racism and discrimination in light of the coronavirus outbreak. It is our moral responsibility to offer support and understanding to those most affected by the outbreak and not to further incite hatred and stereotypes. Chinese students make up almost half of the international student body at Northwestern, and their contributions to the academic excellence and cultural diversity of our University is invaluable.

Political disagreements between the two governments are not diseases. The solution to China’s human rights problems is not to quarantine Northwestern students and faculty from any exposure to China so that they can hold on to a narrow set of views. If Northwestern is committed to bringing positive changes to China’s human rights problems, it is my hope that the University does so through active engagement with members of the Chinese community and continued efforts to build a diverse academic environment.