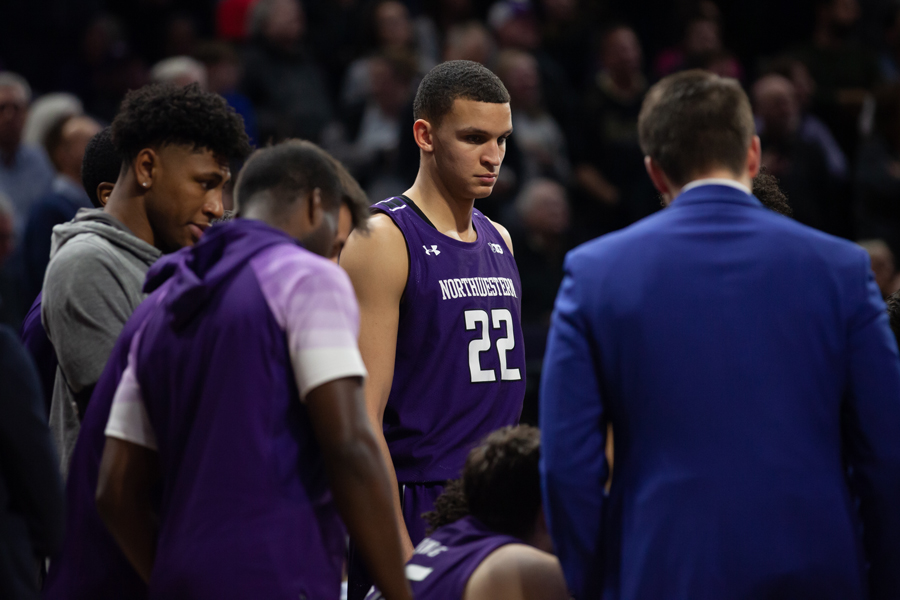 Pete Nance stands in the huddle with his teammates. The sophomore forward has struggled in recent games and is no longer part of the starting lineup

When his three-point shot fell through the net against Michigan on Wednesday, Pete Nance clapped his hands and smiled. The entire Northwestern bench stood up and celebrated. It wasn’t even a big shot –– the Wildcats cut their deficit down to 18 points in the middle of the second half –– but the make looked like it meant something to Nance.

The sophomore forward knows exactly what kind of player he wants to be. Ever since he was in high school, he envisioned himself as a mismatch nightmare at the forward position. Before this season, he spoke about becoming a “star-type player” whose skill could carry NU on nights when the offense wasn’t flowing.

The Cats’ offense wasn’t flowing Wednesday night, but Nance’s three-pointer was the only shot he made all game. Nance scored 3 points in Wednesday’s 25 point loss to the Wolverines, and it was his best performance in February.

Nance is averaging just 2 points over his last four games, and he’s lost his spot in the starting lineup for the first time in his career.

“He’s a young player that’s just trying to figure it out,” coach Chris Collins said. “He’s still very much in the early part of his career, and we’re behind him. He’s going to become a better player.”

Two years ago, Nance was the Cats’ highest-rated recruit in program history. Four months ago, he was their most likely breakout candidate. But heading into NU’s (6-17, 1-12 Big Ten) game Saturday at No. 13 Penn State (19-5, 9-4), Nance is the Cats’ seventh man in the rotation, trying to find his way back.

By any statistical measure, Nance is struggling. In conference play, he’s shooting 36.2 percent from the field and 25 percent from three-point range. The Cats are outscored by 32.8 points per 100 possessions when Nance is on the floor. He doesn’t start games anymore, and he doesn’t close them, either.

He’s still just a sophomore –– and one who barely had a freshman season to build upon. After getting mono in January last year, Nance missed nine games and lost 15 pounds in four weeks. Most nights, he was out of the rotation, and Nance admitted he didn’t feel like himself after coming back in February.

But now he’s dealing with one of the toughest stretches of his basketball life, even though he’s at full strength. He’s trying to stay upbeat, and Collins said Nance still has the work ethic you’d expect from the son of a three-time NBA All Star.

“He’s been putting the time in, his attitude has been great,” Collins said. “And he wants to be a good player. He’s just got to keep working and keep finding it.”

In his last four games, though, Nance has looked like a different type of player.

As Nance’s shooting numbers have regressed, he’s been less aggressive than ever. He took four shots against Michigan and three shots against Rutgers. He’s taking a higher proportion of three-point shots than he did in non-conference play, and the 6’10” forward has made just nine layups or dunks in his last 13 games.

But Nance still has plenty of time to turn his sophomore season around, and Collins said he’s committed to letting Nance play though his mistakes.

“I’ve been pleased with his attitude throughout some of his struggles,” Collins said. “He’s gotten in the gym, and he’s working. He’ll break out here pretty soon.”