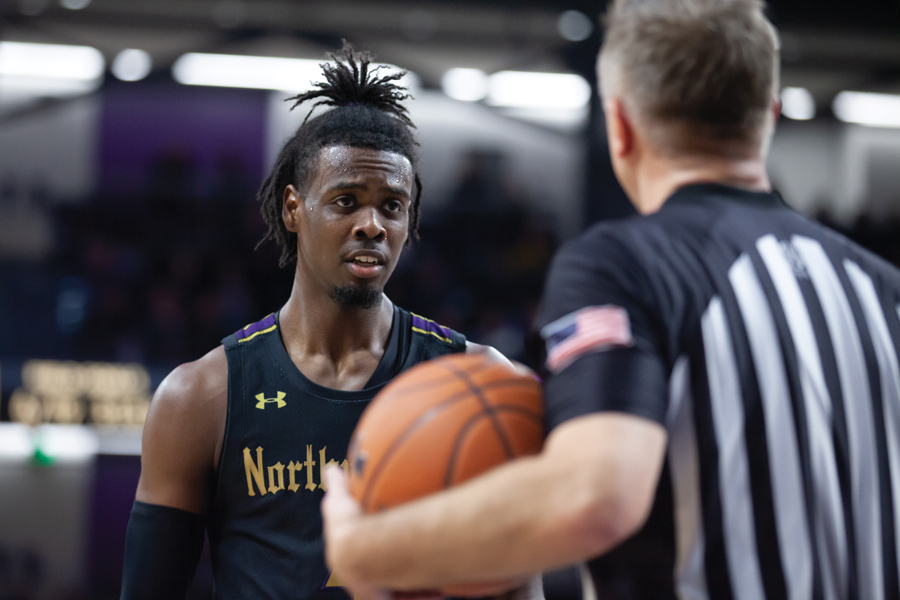 Freshman Jared Jones prepares to shoot a free throw. He led the team with a career high 12 points.

In Chris Collins’ mind, it’s only happened twice all season. Despite all the agonizing close losses and all the blown second-half leads, Northwestern hasn’t been run off the floor often.

That happened two weeks ago at Michigan State, and it happened again Wednesday in the Wildcats’ (6-17, 1-12) 79-54 loss to Michigan (15-9, 6-7). But the Spartans were ranked No. 14 in the country when they played NU in January, and the Wolverines entered the game tied for 12th place in the Big Ten.

NU still lost to Michigan by 25 points –- the team’s second-biggest loss of the season.

“Sometimes you just don’t have it,” Collins said. “We had a hard time getting anything going, and we didn’t really defend at a great clip. The other team was a step faster tonight.”

The Cats forced misses on the Wolverines’ first 11 shots and took an early 7 point lead, but the momentum shifted when Michigan replaced its struggling starting point guard, Zavier Simpson, with a better shooter in David DeJulius.

After making the move seven minutes into the game, the Wolverines went on a 32-10 run to end the half. NU made just three field goals in the last ten minutes of the first half, which helped Michigan build a double-digit lead at the break.

Michigan extended that lead to 21 points early in the second half, and the Cats only strung together a few good minutes after the break. A three-point shot from sophomore forward Miller Kopp made it a 13 point game with just over seven minutes left, but the Cats only made three field goals the rest of the way.

“At the end of the day, we’ve just got to keep fighting,” freshman center Jared Jones said. “It’s adversity. Everybody deals with adversity, and you’ve just got to fight through it.”

Jones led NU with a career-high 12 points, but he was the only player who shot well from the field. Kopp finished with 10 points on 12 shots, and he had one of his lowest scoring totals of conference play.

Grad transfer guard Pat Spencer finished with 8 points, but he scored most of them in the first ten minutes of the game. And freshman guard Boo Buie –– who has bailed out the Cats’ offense several times this season –– had 6 points and went 1-9 from the field.

Coming off one of NU’s worst losses this season, the Cats now go on a road trip to play two of the best teams in the Big Ten –– No. 13 Penn State and No. 9 Maryland. But despite the Cats’ status as the last-place team in the Big Ten, Collins said he has faith in the team staying together.

“It’s disappointing because we had strung together some good games,” Collins said. “It’s not easy when three, four or five of these games that we probably should have won, we haven’t closed the deal. But to have these young guys continue to come back each day and keep fighting and want to keep playing, it’s something I’ve been proud about.”