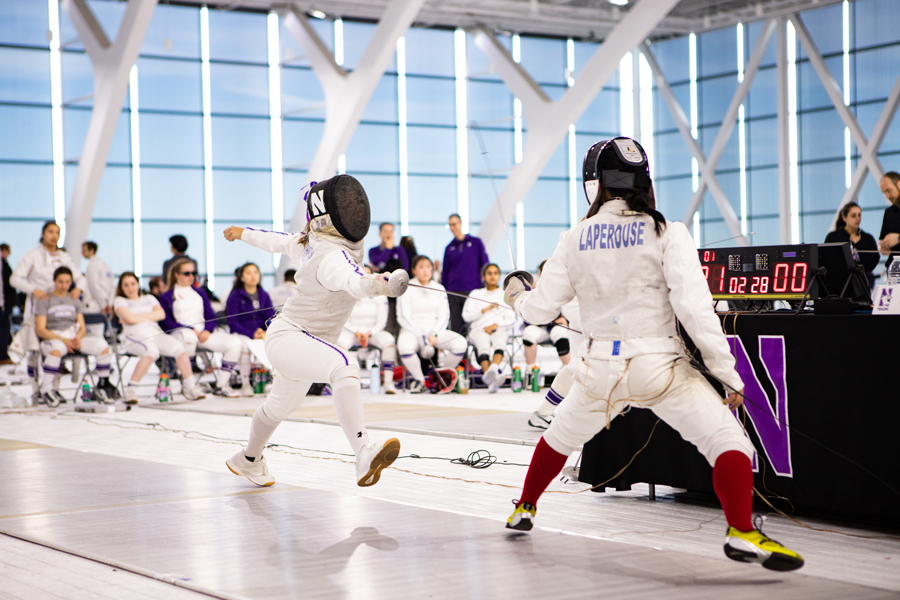 A Northwestern fencer strikes her opponent.

No. 9 Northwestern couldn’t have asked for a better end to its regular season.

It didn’t match last season’s success, when the team finished No. 2 in the nation. But after going 10-2 at the NU Duals and defeating three Top 10 teams including No. 1 Princeton, the Wildcats have staked their claim as one of the best fencing programs in the nation.

Most of NU’s squad will resume fencing on Feb. 22, when the team travels to Columbus, Ohio for the Midwest Fencing Conference Championships.

But first-year foil Celia Crompton and sophomore sabre Abigail Swallow will hit the piste a week earlier than the rest of their teammates.

The two fencers will travel to Columbus this week to participate in the Junior Olympics, the final event of the North American Cup series. A four-day event beginning on Friday, the Junior Olympics are an event reserved for fencers 20 years old or younger to qualify for the United States’ junior fencing team.

According to coach Zach Moss, Crompton and Swallow are headed to Ohio to prepare for postseason match play, not to qualify for the national squad.

Unlike the Cats’ usual fencing tournaments, the Junior Olympics are an individual event. Moss explained that fencers are placed into pools of six or seven people and advance to an elimination bracket to face opponents in 15-point bouts if they defeat a majority of their pool. If a fencer finishes in the Top 32, they will receive national ranking points.

Moss said both Crompton and Swallow are capable of a Top 32 finish. While Swallow finished 24th in January’s North American Cup, the Junior Olympics will be Crompton’s second event of the season because she has been battling injuries, according to Moss. He hopes the tournament will help Crompton “(get) the experience and the competitive edge.”

Since he is only working with two athletes at the event, Moss said his coaching style will change. During collegiate tournaments, he is responsible for finding innovative ways to communicate strategies with the foil, epee and sabre squads. But at the Junior Olympics, the coach said he will be able to give his undivided attention to Crompton and Swallow.

While many of her teammates are enjoying a weekend off, Swallow is excited to fence in the Junior Olympics for the final time. Performing in the event — the Seattle native said — will allow her stay in a “competitive mental state” for the Midwest Championships and “not feel off her game” once the postseason tournament begins.

Moss said one of the hardest parts about the Junior Olympics is that fencers don’t have the support of their entire team. But Swallow isn’t concerned about the lack of Cats fencers.

“There’s only two of us in this event, so we’ll both be there for each other,” Swallow said. “We will treat it as a team event and know that we have the team behind us.”