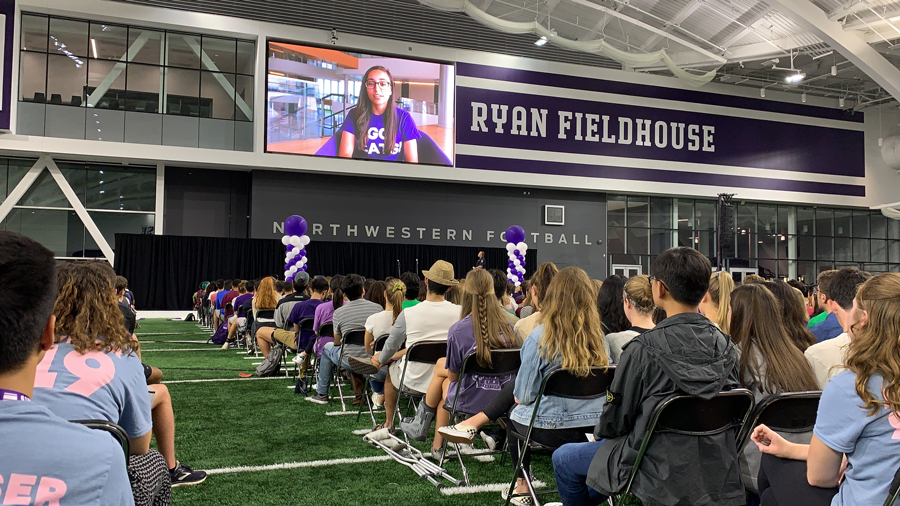 With the third annual ImproveNU contest approaching, previous years’ winners are reflecting on their accomplishments.
The contest, organized by Associated Student Government, invites Northwestern start-ups and organizations to present to a panel of judges and funds the top three rated groups. This year’s presentations will be held in the McCormick Foundation Center on Feb. 29.
Weinberg junior Lilliana de Souza said she founded 2019’s first-place winner NpowerU after transferring to Northwestern and feeling Wildcat Welcome lacked information on campus safety. Judges praised her pitch and she received $7,000 to promote campus safety and awareness of safety programs.
Much of that funding went toward distributing personal safety alarms to each incoming student as part of an NpowerU presentation at last fall’s Wildcat Welcome.
De Souza said she hopes to expand NpowerU’s presence beyond orientation. This quarter, she said NpowerU is working to strengthen its social media presence to inform students about programs such as NUPD’s free self-defense classes.
Growing NpowerU has required de Souza to be patient with administrative bureaucracy, she said, but she appreciates the support ImproveNU helped her garner among administrators.
“When I would need something, most of the people I needed to talk to were already judges and actually voted for me,” de Souza said.
Drake Weissman, co-founder of eo bike-share and Weinberg senior, found similar value in the contest. Eo took second place in 2019’s ImproveNU contest, winning $3,500.
“It helped us learn about some of the concerns and get some feedback from people that obviously were very important and very relevant in seeing the implementation of this through,” Weissman said.
One such concern was that eo bikes would be abandoned and lost, Weissman said. Unlike bike-shares such as Chicago’s Divvy, which has bike docks located throughout the city, eo initially sought a dock-less model.
The solution lied between the two models: Northwestern’s already numerous campus bike racks would serve as a functional equivalent for docks.
After operating for two quarters, eo’s fleet has grown to 60 bikes and has provided 18,000 rides, Weissman said.
“I was texting my friends, texting everyone I knew to buy memberships and telling them about the system,” Weissman said. “But that first day when I saw someone riding I didn’t recognize, it was like, ‘Holy cow — this might just really become a thing.’”
Neha Basti, co-founder of 2018’s ImproveNU first place winner ResilientNU and Weinberg senior, said she found the student response humbling. ResilientNU organizes mental wellness cohorts for students co-led by Northwestern students and staff.
This interplay between staff and students is part of the organization’s sincere focus on students. Basti said the cohorts are discussion-based and aim to introduce different strategies and allow students to pick what works for them.
Basti said after this quarter, their fifth in operation, about 65 students will have completed the program. Basti said she is glad to see the program reach a larger group of students, but still appreciates hearing how ResilientNU helps different individuals.
“I hear more individual stories about how what they learned in cohort helped them have a healthier, happier quarter — that makes it worth it,” Basti said.