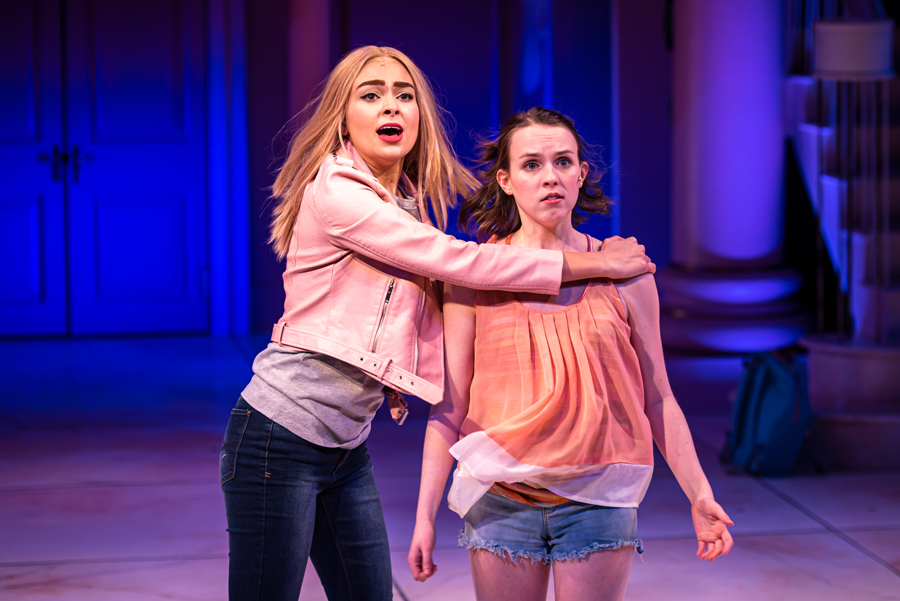 “Omigod You Guys!” Looks like “Legally Blonde: The Musical” is coming to Northwestern this Valentine’s Day!

Based on the 2001 film starring Reese Witherspoon, the musical adaptation will run from Feb. 14 to March 1 at Northwestern’s Virginia Wadsworth Wirtz Center for the Performing Arts.

The popular romantic-comedy tells the story of Elle Woods, a college senior and sorority president who gets dumped by her boyfriend. Determined to win him back, she decides to follow him to Harvard Law, and slowly realizes that she is worth more than her physical appearance and obsession for pink.

Communication senior Rory Schrobilgen, who plays Elle’s love interest Emmett Forrest, said “Legally Blonde” is a “familiar” story that resonates with many Northwestern students.
“This is a story that I grew up with, and I’m sure that a lot of people our age also feel super familiar and close with these characters,” Schrobilgen said.
Beyond the show’s appeal to nostalgia and familiarity, director and choreographer Christopher Chase Carter said he hopes “Legally Blonde” will teach students important life lessons. Although Elle is initially dismissed by the students of Harvard Law as a vapid sorority girl, she proves that she is capable of being both traditionally feminine and a talented lawyer. Through Elle’s narrative arc, “Legally Blonde” defies assumptions about the type of women who deserve respect and appreciation for their accomplishments.
Communication junior Alexa Moster plays Elle Woods in Wirtz’s production of the musical. She said Elle is an important character for her because her struggle is one many modern women go through.

“Elle Woods represents a person who is frequently misunderstood, and a lot of us know this person in our lives,” Moster said. “Even if we think this is just a funny trope that we see in movies or comic books, in reality, there are a lot of women who present themselves very differently than they actually are inside. That just reveals our own subconscious judgement in terms of how we view other people and their worth based on how they look.”
Carter explained that a crucial part of the show is understanding and respecting everyone’s uniqueness. Although Elle is treated as a joke because she is traditionally feminine, her femininity ends up being part of what makes her a great lawyer, as it gives her a unique advantage in arguing her client’s case.
As a guest director, Carter added a fresh perspective to “Legally Blonde.” Moster and Schrobilgen both said Carter, a professional director in Broadway theater, gave insightful advice and guidance in the process and the expectations they will face in the professional world.
Carter said working on “Legally Blonde” was a collaborative process, and he enjoyed working with the students on the production. He also said the musical struck a personal chord with the students, as it reflects where they are in their own lives.
“For me, and for them too, I think they’re telling this story of themselves as college student seniors going to grad school, which is many of these students,” Carter said. So this story is a very relatable story, and it makes it easier on me as the director-choreographer because you just ask them questions and get to truly collaborate on this project. They get to use parts of their today and yesterday to tell a story.”
Schrobilgen agreed that this particular show felt especially relatable to upperclassmen. “Legally Blonde” will be his last show at Northwestern, and although actors in the rehearsal room hold themselves to a high standard, he said the environment remains positive and upbeat.

As opening night approaches, Carter said his main hope for the audience is that they will have fun.

“I’m looking forward for people to come and experience a show that’s not a typical show put on at Northwestern,” Carter said. “This is not your normal, super-dramatic show. It’s fun, it’s pop-y, it’s today. It’s a fresh take on a modern musical.”