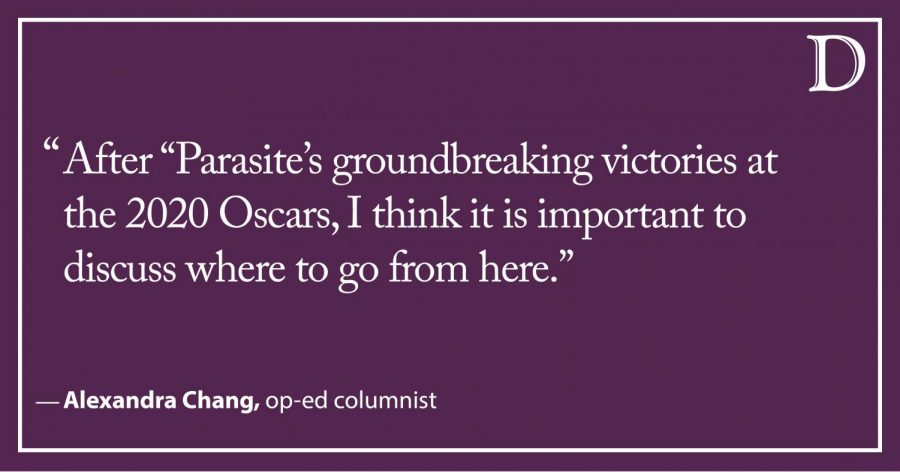 As a Korean American hoping to work in the entertainment industry, seeing Bong Joon-ho win an Academy Award for Best Director and “Parasite” win Best Picture — in addition to other accolades — made Sunday a particularly memorable day for me. The recognition of Asians in the entertainment industry comes once every blue moon in America, so while shocked, I was pleasantly surprised by the sheer number of awards that Koreans brought home. At the same time, I experienced a lot of confusion as I navigated the remarks directed toward South Korea on social media platforms and in everyday conversations. This is largely because these comments were coming from members of my community who I have not previously noticed participating in discussions about representation.

The vast majority of these comments were congratulatory, and many seemed well-intentioned, but there were a few remarks that were disheartening. While there will always be controversy about who should win at the Oscars, I believe the comments specifically surrounding “Parasite”’s Best Picture victory and Bong Joon-ho’s Best Director victory are rooted in America’s history of colonization and imperialism.

First, some made comments that “Parasite” only won Best Picture because it was a “strategic” or “smart” move by the Academy to compensate for its past failings to recognize artists of color in addition to international talent. Similarly, some remarked that “Parasite” only won because it was a foreign film, and its victory would make the Academy appear “woke” or “cultured.”

These comments would be immediately followed by their own “genuine” opinion that “Parasite” obviously should have won and that they just lacked faith in the Academy to make the “correct” choice. However, these reactions differ significantly from my own (and most other Koreans); I responded with sheer joy, not questioning the reasons for why “Parasite” won. Instead, I thought that “Parasite” was simply the Best Picture. The discrepancy between my reaction and the reactions of others when “Parasite” won leads me to question the authenticity of their “genuine” opinions.

The most difficult comments to hear were those surrounding Joon-ho’s translator. As a first-generation American with immigrant parents and grandparents, I am very used to having conversations with people who speak English with an accent, Konglish, or just plain Korean; in fact, three out of four of my grandparents are unable to speak English. Thus, it has been difficult to hear “woke” people actively acknowledging the extra time it took for Joon-ho to finish his speeches — which were already considerably shorter than others.

Even the acknowledgement of the presence of a translator is a microaggression, in and of itself, similar to comments about how ASL interpretation is “unnatural” or “inorganic.” Language, specifically English, is just one more subtle way that people in positions of privilege assess the “intelligence” and value of people in American society. These beliefs and judgements have imperial roots and are undergirded by histories of oppression that are often overlooked.

After “Parasite”’s groundbreaking victories at the 2020 Oscars, it is important to discuss where to go from here. First, we must understand that the hashtag #OscarsSoWhite still holds true. Furthermore, the victory of Parasite must not give the Academy a ticket to revert to their longstanding and outdated trends. I fear that people will now use “Parasite” as an excuse to stop recognizing international films at American Awards ceremonies, at least for some time.

Alexandra Chang is a Weinberg sophomore. She can be contacted at [email protected] If you would like to respond publicly to this op-ed, send a Letter to the Editor to [email protected] The views expressed in this piece do not necessarily reflect the views of all staff members of The Daily Northwestern.