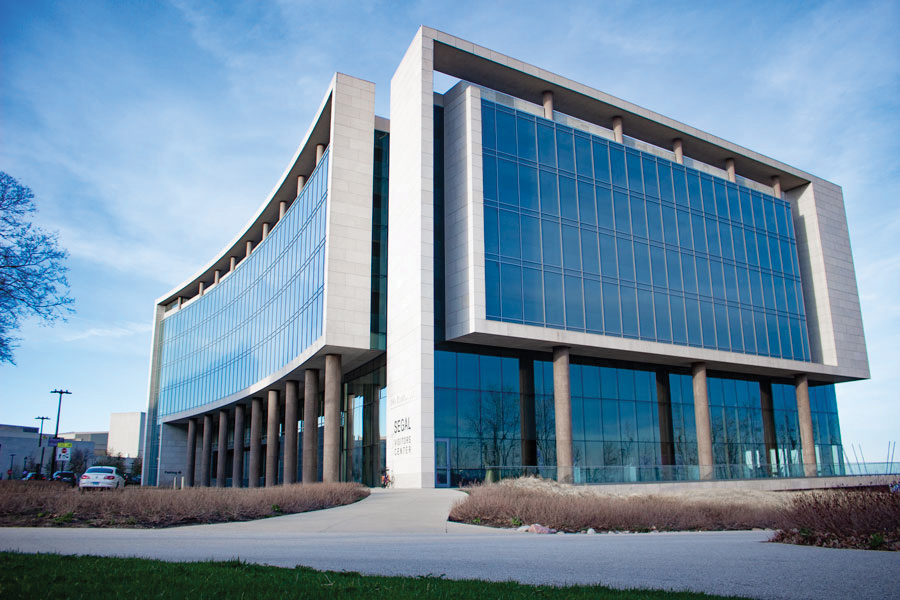 Segal Visitors Center. The Common Application will no longer ask applicants for their disciplinary history beginning in the 2021 application season.

One year after the college admissions scandal underscored inequities within higher education, University President Morton Schapiro and Provost Jonathan Holloway discussed Northwestern’s use of legacy admissions in interviews with The Daily — and said it’s unlikely the practice will end in the University’s near future.

Last month, Johns Hopkins University made headlines after the school’s president penned an article in The Atlantic on how phasing out of legacy admissions led to incoming classes with higher proportions of first-generation and low-income students — without intense pushback or a drop in alumni giving. Among U.S. News & World Report’s top 15 global universities, nine schools have either ended or never used legacy preferences including the University of Washington, University of Oxford and the University of California, Berkeley.

Legacy preferences involve taking into account whether an applicant’s family member attended an institution. How the practice is defined varies among experts — with some using “legacy” to refer only to an applicant’s whose parents went to a school, while others include siblings, grandparents and more. Still, their consideration is a widespread practice with 42 percent of private institutions using them, according to a 2018 survey.

Northwestern considers legacy status in admissions, along with schools like Stanford University, the University of Notre Dame and Harvard University, according to each institution’s common data set. The school’s official policy considers whether “a student has a sibling, parent, or grandparent that graduated from Northwestern,” but notes that “no admission decision will ever be made solely based on legacy status.”

While acknowledging that Johns Hopkins was able to make strides in diversity among its incoming classes through ending the practice, Schapiro said he doesn’t believe considering legacy status has hurt Northwestern.

“It depends on what you do with legacies, if you’re breaking ties (between applicants), is that really the end of the world?” Schapiro said. “If you’re giving extraordinary preference over non-legacies, that’s probably hard to defend morally.”

Schapiro told The Daily last year that he reads a select pool of about 550 prospective students’ applications with the group including children whose family members have donated to NU and legacy students.

In today’s world of higher education, Schapiro said, there’s another factor to consider in discussions around phasing out legacy admissions: what populations might now be impacted by their elimination.

“Wouldn’t it be ironic,” he said, “now that we have a substantially more diverse student body, if the kids of those graduates all of a sudden didn’t get the legacy advantage that the rest of the people in their dorms did when they were there.”

Some critics of the practice, however, say the same goal can be achieved through holistic and race-conscious admissions policies and argue that its continuation would only continue to perpetuate different forms of economic inequity.

Schapiro estimated that about 10 percent of the undergraduate student body is made up of legacy admits when factoring in parental connections alone. As the practice rises in controversy, schools — including Northwestern — are often quiet about legacy admissions data, typically not publicly releasing hard numbers.

That’s why the 2018 lawsuit challenging Harvard’s use of race-conscious admissions policies unexpectedly shined new light on the practice.

Court documents filed during the lawsuit showed 21.5 percent of white students admitted to Harvard had legacy status — while those figures lowered to 6.9 percent for Latinx applicants and 4.8 for black applicants. Total, students with legacy status made up around 14 percent of a given class.

At schools across the country, students with legacy status might make up a smaller percentage of undergraduates now than they did decades ago — as some universities filled two-thirds of their incoming classes with legacy applicants. Still, investigative journalist Dan Golden told The New Yorker last year that since the overall acceptance rates at highly selective colleges have plummeted in that time, “proportionally, being a legacy is even more of an advantage (today).”

Studies estimate that applying to a school with legacy status can double or triple a student’s chances of getting into a top-ranked institution.

Some schools using legacy admissions express a number of motivations for maintaining them. In a deposition from the school’s lawsuit, the dean of Harvard said bringing children of alumni who “have more experience with Harvard” together with “others who are less familiar with Harvard” was important in ultimately making both groups “more effective citizens and citizen leaders for society.” Others also argue that the practice helps bring in donations to schools — which can go toward supporting programs like financial aid — though research doesn’t show a clear relationship between the consideration of legacy status and alumni giving.

“I personally would not work for a college which had legacy admission because I am not interested in simply reproducing a multigenerational lineage of educated elite,” Peterson wrote. “And if anyone in our office ever advocated for a mediocre applicant on the basis of their ‘excellent pedigree’ they would be kicked out of the committee room.”

Provost Jonathan Holloway — who is leaving at the end of Winter Quarter to soon become president of Rutgers University — told The Daily in an interview this month that while it’s “hard to imagine” most schools walking completely away from the consideration of legacy status, Hopkins’ recent revelations about their own change may lead to re-evaluating approaches to the practice.

While the school ended the practice in part to increase diversity among its student body, however, Holloway added that he was “not convinced” that eliminating legacy admissions was the only way to do so. He pointed to Northwestern’s rising proportions of students of color and first-generation and/or low-income students as an illustration that legacy preferences and class diversity aren’t mutually exclusive.

In recent years, for example, Northwestern has made low-income admissions a larger priority, creating and achieving its “20 by 2020” Pell-eligible initiative to have a minimum of 20 percent of incoming classes be made up of Pell-eligible students.

“We’ve done it,” Holloway said. “So it’s about having a really skilled enrollment management team. However, what the president at Hopkins did is really, really enticing because it starts to make your application process a lot easier.”

Holloway also emphasized that the consideration of legacy admissions “isn’t about taking unprepared students” over more qualified applicants — or at least shouldn’t be.

The trick, he said, is getting it right.