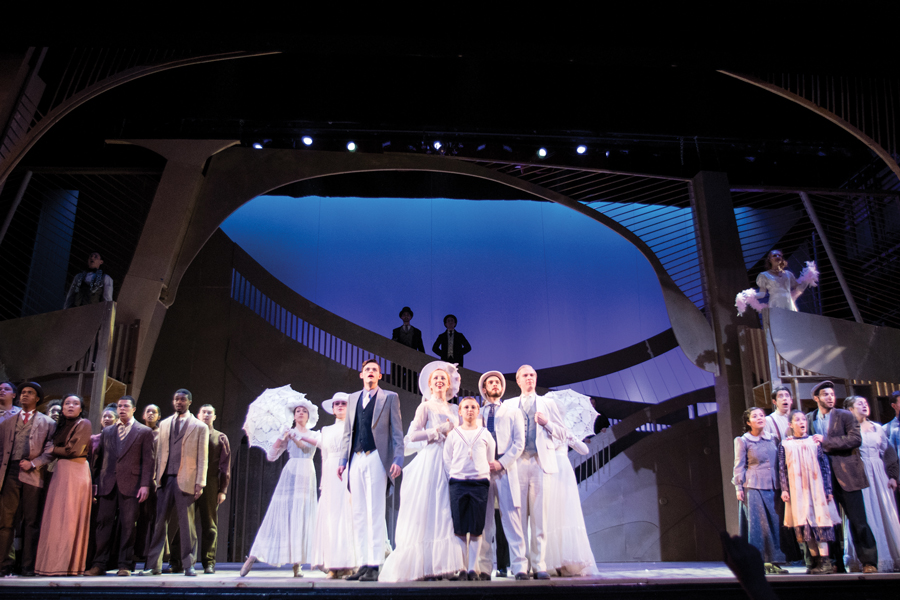 Students perform at the 76th Annual Dolphin Show, “Ragtime.” After a year off, the organization is relaunching under new producers, with a focus on modernizing the organization.

When Communication junior Rachel Khutorsky was a freshman, one of the first student groups she joined was The Dolphin Show, as an assistant producer for that year’s production of “Ragtime.” Dolphin quickly became her favorite organization on campus, and she served as director of corporate relations on next year’s “Hello, Dolly!”

However, after briefly serving on the executive board as one of the directors of development for the 78th Dolphin Show, she ultimately left the board after disagreeing with decisions made during the show selection process process. Despite her resignation, Khutorsky was determined to return.

“Because I care about this organization so deeply and always have, I always knew that I wanted to return to Dolphin one day,” Khutorsky said, “and help really create structural changes in the organization that will allow it to thrive and survive on campus for years and years to come. This show has been running very similarly for the past 78 years. It makes sense that a lot of things that we have in place don’t work anymore, because it doesn’t make sense that you’d be doing something the same way for 78 years.”

The 78th iteration of The Dolphin Show was initially scheduled to go up toward the end of January, but was cancelled after disagreement within the organization during the show selection process resulted in the resignation of key members of the executive board during the spring. The resignations occurred after several discussions regarding inclusivity, raising concerns among the student theater community about institutional issues within the organization.

A public announcement regarding the cancellation of this year’s Dolphin Show was never officially made, but the organization remained silent on the status of the production after a May 30 Facebook post addressed the resignations, and there were no attempts to organize a new board or bring on a new director. In October, sources with ties to the organization told the Daily the production would not be going forward this academic year.

“It made me deeply upset to hear how divided our community had gotten about (the Dolphin Show),” Amelio said. “So I was drawn to be a part of Dolphin this year and restore the faith and and what it has done for so many people, especially for people like me who like haven’t been a part of Dolphin before and could find new hope in it.”

Khutorsky said she has nothing but respect for every person involved in last year’s process, but the situation did cause her, Amelio and Flanders to reconsider how the organization is run and make several structural changes. For next year’s production, the producers are planning to implement the Chicago Theater Standards, a set of guidelines used by professional theater groups in the Chicago area to resolve conflicts in their organizations, which they hope will make Dolphin a better environment.

Khutorsky said she is in the process of creating an alumni advisory board, after receiving an outpouring of support from Dolphin alumni, many of whom work in professional theater. Khurtorsky sent an email to around 1500 of those alumni to see who is interested, and she plans to form a board that can help offer the producers and the rest of Dolphin guidance during show selection and restructuring of the organization. According to the producers, the current plan is to check in with the board around once a quarter, although details are still being worked out.

In addition, the producers will be introducing several positions within the organization. The producers are currently in the process of selecting an executive board, and are looking for someone to fill the new role of the director of accessibility, inclusion and diversity. The person who fills this role will be in charge of internal education of members of the organization, including cast and crew, and will be a vital voice during show selection.

Because it is a new role, the producers said they will collaborate with whoever fills it to shape its responsibilities. The director will work closely with another new position, the director of internal education, who will be in charge of educating the community through workshops and collaborations with other student groups such as Peer Inclusion Educators and Sexual Assault and Health Peer Educators. In addition, Flanders said there will be a director of accessibility services, which will focus on making the show financially and physically accessible to all audience members.

Because the issues last year occurred during show selection, many of the changes will be focused on retooling that process. The producers will devote significantly more time to show selection, which used to take only a week but will now encompass several weeks, so that they can hold more conversations during the process and include the input of the alumni board. The producers plan to have the show selected and finish general team member petitions early in the spring, so they can focus on team bonding during most of spring quarter.

Flanders said that, in show selection, they want to focus on the idea of community, as the community that builds around Dolphin is vital towards making the show possible. Although they still have yet to begin the show selection process, this idea of community and ensemble is important to them. In addition, the producers will focus on finding a story they feel the campus needs and reflects the values of the Northwestern community.

“That’s just being a good producer,” Flanders said. “It’s not about you, it’s about the audience you’re serving and the community you’re serving. So that will be very important for us.”

According to Communication senior Kudman, the two were initially unsure of their place in making decisions for the organization, as The Dolphin Show had separated from StuCo in 2018. However, they decided that as co-chairs, it was their responsibility to be leaders in student theater, and the situation required their attention.

“The mission of The Dolphin Show very much overlaps with what we as StuCo do, and I think they are quite like the epitome of what StuCo does,” Kudman said. “They really strive to put up high-end, professional quality work that is made entirely by students.”

During the fall, Kudman reached out to one of the producers of this year’s now cancelled show, and came to an agreement that he and Mahesh would be in charge of selecting new Dolphin Show producers for next year. Traditionally, the Dolphin Show producers choose their successors, but Kudman said they decided StuCo taking over this process was the best course of action, as it would provide the new producers with a clean break from the issues of the past.

At the beginning of winter quarter, Communication junior Mahesh sent out a call for new producers in the StuCo newsletter TWIST. He and Kudman set up a time for petitions, and met with several people interested in producing the show. The two then held a meeting with other members of StuCo’s exec, where they selected Khutorsky, Amelio and Flanders for the positions. They announced the three as the new Dolphin producers via TWIST on Jan. 15.

Flanders said, although the Dolphin producers currently do not have plans to fold the organization into StuCo, they do plan to build a closer relationship with the co-chairs in the future, including holding regular check-ins and seeking them out for advice and mentorship. Amelio said they are keeping open the possibility of collaborating with other boards and working to create a more sustainable show through the sharing of inventory.

Mahesh said he and Kudman are both confident in the three new producers’ ability to lead Dolphin, noting that part of why they chose Khutorsky, Amelio and Flanders is because they all work well together as a team. Mahesh also said the three producers’ vision for the organization align with his and Kudman’s vision for the general Northwestern theater community.

“They have an eye out for and a priority for making the process fun and good and good to the students,” Mahesh. “As co-chairs, that was myself and Noah’s thesis for the year, to make sure that people are having fun and being students and learning.”

“I’ve always loved the community that theater can generate, and the fact that it starts with the three of us but also has been lead by these people of our past, and we’re on their shoulders too, I’m just really excited for that,” Amelio said.

Note: Emma Flanders works in the business office of The Daily Northwestern.