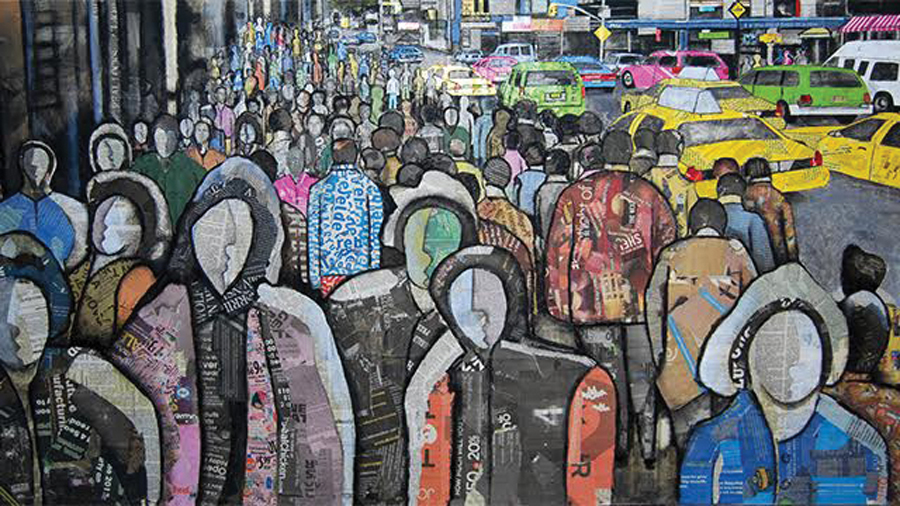 “A Cuban in New York” by Eduin Fraga. The piece will be on display in Dittmar from Feb. 13 to March 18.

Contemporary Cuban artist Eduin Fraga will premiere his first exhibition at Dittmar Memorial Gallery on Feb. 13 with a show entitled, “Images of my Experiences.”

The exhibition will have an opening reception Thursday from 4 p.m. to 6 p.m., and will close March 18.

Medill junior Karen Reyes was responsible for curating and selecting Fraga’s exhibition. She has been working as a student curator for Dittmar since the fall of 2019. Reyes said she was attracted to Fraga’s work because of how personal it was to his own life in Cuba.

“When he proposed this exhibit to us, he focused a lot on capturing good things you would see in daily life if you were to walk down the street in Cuba,” Reyes said. “In his description of the show, he says he tries to create a collection of experiences that have shaped the societies that he is familiar with today.”

Fraga has been involved in the Cuban art scene for close to 20 years, starting out as a commercial artist in 1999. He moved from work-for-hire jobs to pursuing his own artistic ventures around three years later.

In his art, Fraga places clips from both Cuban and American newspapers on a canvas or cardboard, and — with materials like acrylic or charcoal — constructs collages to represent moments or experiences he has personally witnessed.

Fraga said part of why he was interested in bringing his artwork to the Chicago area is because of the Latinx population of the city, as he felt his depictions of Cuba could find an audience in the community.

Spanish and Portugese prof. Emily Maguire, the department chair for the Spanish and Portuguese language program, said the political culture in Cuba has had a huge impact on the artistic community of the country.

The revolution, which ended the military dictatorship of Cuban president Fulgencio Batista and implemented a new government under Fidel Castro in 1959, established a fraught and evolving perception of artistic freedom within the country.

Maguire said just last year the Cuban government proposed and instituted a new law, known as Decree 349, which seeks to place limitations on the production of art in Cuba.

“(Decree 349) instituted stricter controls, allowing the government to approve all art that is produced and sold in Cuba,” said Maguire.

Fraga said in the often fraught environment of Cuba, art acts as a means of expression for many people.

“In Cuba we have a lot of problems with everything; the government, society,” Fraga said. “This is my way to show in every part of the world I go what life is like in Cuba and what Cuban people and artists have to say.”