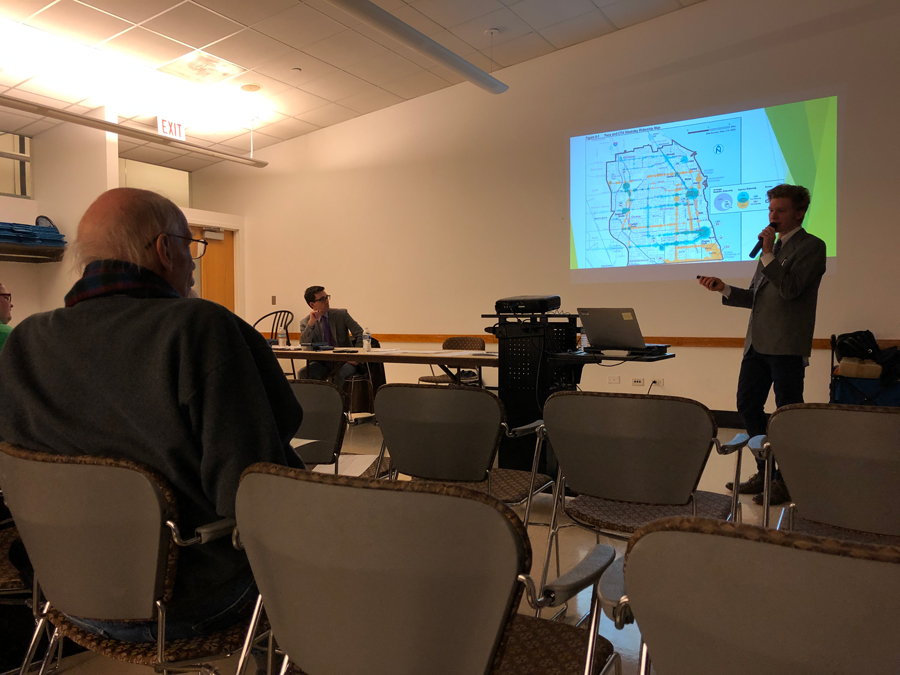 Pace senior planner Christian Turner delivers a presentation detailing the proposed changes to Pace bus routes at a Tuesday meeting. The changes would discontinue Routes 210 and 421, alter Routes 215, 225, 226, 422 and 423, as well as create Route 424

North Shore residents expressed concerns about the impact of proposed bus route changes on the elderly and people with disabilities at a Tuesday public hearing.

The hearing, held at the Levy Senior Center, was the fifth of six hearings organized by Pace — the suburban bus division of the Regional Transportation Authority in the Chicago metropolitan area — on proposed route changes in the north suburbs. The changes would discontinue Routes 210 and 421, alter Routes 215, 225, 226, 422 and 423, as well as create Route 424.

Cheryl Crawford, the director of human resources and volunteer services at Glenview’s Kohl Children’s Museum, said restructuring Route 423 will create transit difficulties for employees with disabilities. Many employees living in Evanston and Rogers Park currently transfer from the Chicago Transit Authority Purple Line to Route 423, which drops them off directly at the museum. Restructuring the route would force employees to walk from the El station to Kohl Children’s Museum — a difficult walk for employees who use walkers and wheelchairs.

“Trying to navigate their way from the metro station to the museum is far, especially in the winter,” Crawford said. “There’s snow and ice on the ground, and people don’t shovel. There’s an impact on future recruits; there’s an impact on patrons. It’s a much longer way all around and not direct.”

These changes, which are part of the second phase of a transit coordination proposal following a 2017 transit study conducted with the CTA, would take effect in August.

According to a Pace release, the plan intends to streamline routes, increase frequency on arterial roads, reduce waiting times and better connect riders to CTA trains. The original study guided these service recommendations, which aim to increase ridership and service new markets.

The first phase of changes, which adjusted service on Route 208 and Route 213, took effect August 2018. In response to a proposal to discontinue the 205 Chicago/Golf Road CTA bus route, residents voiced concerns that students would lack sufficient transportation to and from Evanston Township High School. In response to feedback, a revised service plan added six morning trips over two hours and six afternoon trips over two hours in the peak direction.

Several proposed changes may impact Evanston residents. Under one change, riders leaving the Howard Street El station would no longer have a direct route to Westfield Old Orchard on the Route 215 bus. Instead, they would need to board the Route 226 bus at the CTA station and transfer to the Route 215 bus at Crawford Avenue and Howard Street in Skokie.

Under the proposed changes, Evanston resident Dan Joseph said the only bus that runs directly from Old Orchard to Howard is the 97 Skokie CTA bus. This bus departs from Old Orchard on Saturdays at 8:30 p.m. and Sundays at 8:50 p.m., leaving Old Orchard employees who work after these hours without a direct commute.

“We need everybody’s help to urge elected officials to get CTA to listen and work with Pace and RTA to extend those last evening trips,” he said.

Skokie resident Tyler Sutherland said altering Route 226 creates a nearly mile-long gap between the Howard CTA Station and the Jefferson Park Transit Center. Sutherland said this gap means families with young children and elderly people have to cross a bridge over Interstate 94 to reach a stop that takes them to the transportation center.

“This winter being an anomaly, I can only imagine what that will be like in a standard year,” Sutherland said. “Some reconsideration of the routes would be wise.”

He added that the current plan isn’t set in stone.