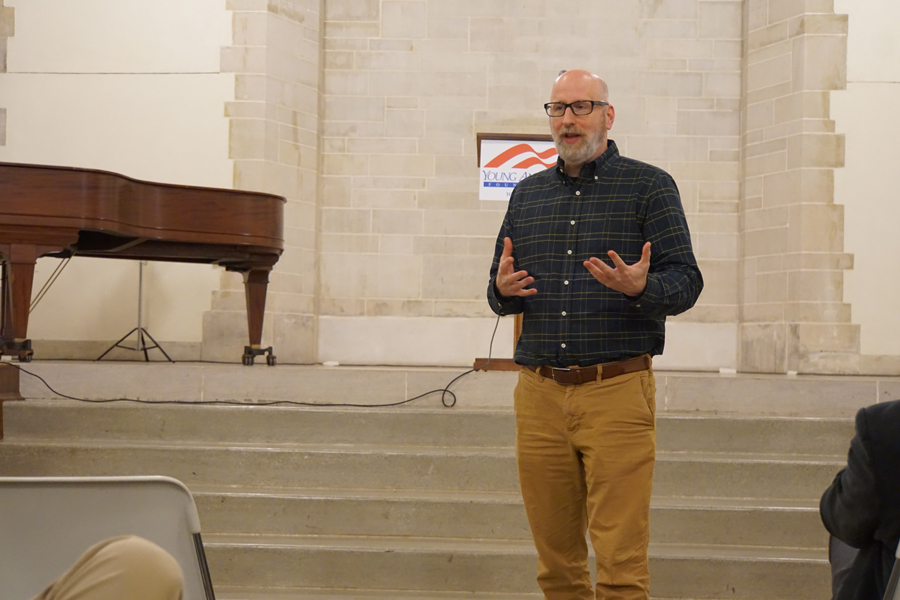 David French spoke about the First Amendment clash on college campuses on Tuesday in Seabury Hall.

French was invited by Northwestern College Republicans. He is an attorney, an Iraq War veteran, and is currently the senior editor at the online political magazine, The Dispatch.

French spoke about the culture of enmity that is arising in the country, particularly on college campuses. He said people are clustering into like-minded enclaves, which leads to the growth of their common viewpoint.

“I want people to understand that free speech is fundamentally part of our social compact,” he said.

He added that the country’s population is becoming increasingly negatively polarized, as people join political parties due to hatred of the other side rather than support of their own. Despite the decrease in government censorship over the past 20 years, French said, people are more afraid to speak up than ever because the pressure to suppress one’s views is coming from their peers as opposed to top-down censorship.

McCormick junior Zachary Kornbluth, secretary of public relations for College Republicans, created advertising for the event. He said in the wake of the Jeff Sessions event, the group thought it would be relevant to bring in a speaker who was knowledgeable on the topic of free speech.

“(We hope students will gain) an appreciation of free speech, of hearing other people’s viewpoints,” he said. “He isn’t a supporter of Trump and I know that can kind of be a lightning rod so that may help us get our message across.”

In his talk, French said if people see someone being unjustly persecuted, they should stand with the person, even if they have different views. Acts of allyship will create bonds of fellowship that the country currently lacks. When people refuse to defend the rights of others, he said, free speech becomes a power, not a right.

“(I got) an interesting take on the political aspects of free speech and how it functioned on college campuses specifically,” she said.

French welcomed questions from the audience and gave anecdotes from his experiences in college and law school, when he found himself in positions where others refused to hear his point of view.

He stressed that although lawyers have won many cases against censorship and speech codes at universities, people have lost a cultural appreciation for free speech.

“Free speech has been indispensable in every positive social movement in the history of the United States, and remains indispensable to those who are interested in social change,” French said. “And that, very fundamentally it’s one way that a really diverse pluralistic society hangs together is by preserving our mutual civil liberties.”