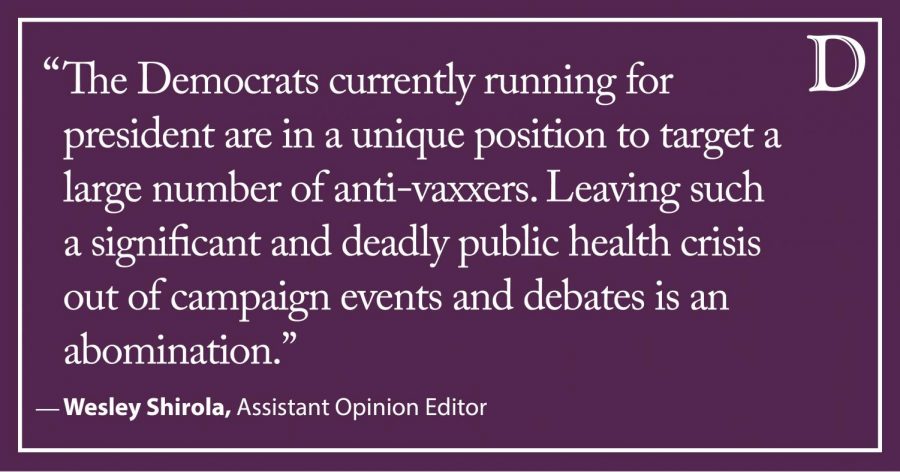 One of the foremost public health crises in the United States today is the campaign against vaccinations, also known as the anti-vax movement. Healthcare professionals typically recommend a vaccination rate of 95 percent to achieve herd immunity—the term that describes the optimum rate for protecting a population from a given disease.

Unfortunately, though, vaccination rates for some of the most disabling and contagious diseases have fallen below this crucial level in many U.S. cities. The vaccination rates for the measles, mumps, and rubella (MMR) vaccine among kindergarteners, for example, were insufficient in seven states in 2018. New Hampshire reported a rate of 92.4 percent; the rate in Washington D.C. was a mere 81.3 percent.

Nearly every state has anti-vaxxers among its citizens. Overall, approximately 13 percent of all Americans report at least some mistrust of vaccines. And, as The Economist reports, a large swathe of those individuals resides right in our own backyard: Evanston, Illinois.

The residents of Evanston, like most of the residents in other anti-vax hotspots, tend to be wealthy and educated. Many enjoy vegan meals and spin-classes. They also tend to fall on the liberal side of the political spectrum. As such, it is imperative that the current candidates for the Democratic nomination for president address the anti-vax movement. Democratic presidential candidates are in a prime position to inform Americans about the severity of this crisis.

Anti-vaccination movements are not a new phenomenon. In fact, opposition to vaccines has circulated among the people of the U.S. — as well as other nations — since the invention of the first vaccine by Edward Jenner against cowpox in 1796.

Jenner inoculated an eight-year-old boy by introducing matter from a cowpox sore on the hand of a milkmaid — in other words, live cowpox virus — into the boy’s bloodstream. The boy suffered a reaction at the inoculation site and was very ill for a few days, but eventually made a full recovery. Months later, Jenner inoculated the same boy with matter taken from a fresh human smallpox sore in an attempt to challenge the protection from cowpox. Remarkably, the boy did not contract the disease. Ultimately, Jenner demonstrated that cowpox matter transferred in a human chain, from one person to the next, provided protection from contracting smallpox.

Following Jenner’s discoveries, widespread smallpox vaccination in England began in the early 1800s. This novel practice was immediately met with public criticism. Objections varied, but were typically based on sanitary, religious, political and scientific concerns or just plain fear — the vaccination involved scoring the flesh on one’s arm and inserting matter from the blister of a person who had been vaccinated a few days earlier.

Anti-vaccination activity has been around ever since, but the current wave of anti-vaxxers in the U.S. largely stems from a controversy that began in England in the late 1990s and early 2000s when a British doctor named Andrew Wakefield spread rumors of a link between autism and the MMR vaccine and that the vaccine was not properly tested before becoming publicly available. These stories, and the subsequent fear and panic, quickly spread like wildfire in European and American news media. In 2004, the Lancet, a British medical journal that published the original work, issued a statement in which it said the paper should not have been published. It took an additional six years for the journal to formally retract the paper. But by then it was too late.

It is impossible to know the primary motivations for today’s anti-vaxxers, but this now-debunked link between the MMR vaccine and autism is surely one of them. Another prominent conspiracy theory among American anti-vaxxers is that vaccines are promoted as a plot to manipulate a supposedly ever-sicker American public. Others are committed to the belief that pharmaceutical companies run the Centers for Disease Control and Prevention. Still others simply think that vaccines don’t work in the first place.

While there are certainly anti-vaxxers on the right of the political spectrum, such a significant number falls on the left that Democratic presidential candidates are doing a major disservice by not talking about this crisis on the campaign trail.

Worldwide, vaccines prevented at least 10 million deaths between 2010 and 2015 according to the World Health Organization; millions more were protected from illness. But we can be doing better. Combatting the anti-vax movement and increasing vaccination rates both in the U.S. and abroad has the potential to save millions more lives.

Anti-vaxxers are not only putting themselves at risk. They are putting vaccinated individuals at risk as well — especially children and the elderly. It’s time that our leaders use their platform to address the anti-vax movement head-on and present hard evidence showing the effectiveness and safety of vaccines. The Democrats currently running for president are in a unique position to target a large number of anti-vaxxers. Leaving such a significant and deadly public health crisis out of campaign events and debates is an abomination. If the Democratic presidential candidates care at all about the health and prosperity of their constituents — and their advocacy for free healthcare for all, or something near that, implies that they do — they will prioritize this discussion. It is no less important than the state of our environment or the never-ending effort to remove President Donald Trump from office. If we don’t increase vaccination rates using a grassroots effort, we will be left with no other choice but to require all children to be vaccinated by law — with no exceptions. The very health of our country depends on it.

Wesley Shirola is a Weinberg junior. He can be contacted at [email protected] If you would like to respond publicly to this column, send a Letter to the Editor to [email protected] The views expressed in this piece do not necessarily reflect the views of all staff members of The Daily Northwestern.