Ravid: I’m not watching Fight Club and you can’t change my mind 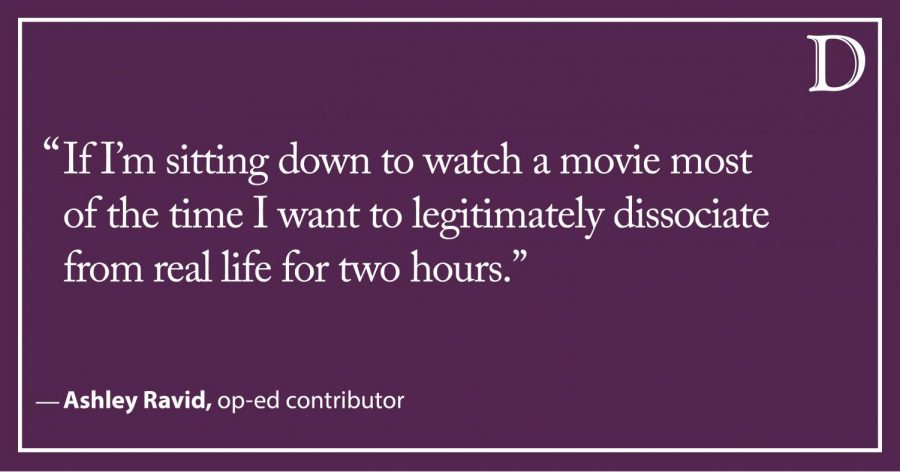 “What do you mean you haven’t seen ‘Fight Club’?”

I mean I haven’t seen it. I’ve had this verbal tête-à-tête many times, accompanied by varying degrees of righteous indignation. Still, every time my resolve not to watch “Fight Club” only grows stronger. Why? It’s this simple: I don’t feel particularly obligated to watch it. Actually, I think it’s weird that so many people seem to think that I should feel obligated to watch it.

When I say I haven’t seen “Fight Club,” I also mean that I haven’t seen “The Godfather” or “Citizen Kane” or plenty of other films that have been popularly deemed “classics.” It’s just easy to use “Fight Club” as an example because I’m hedging a bet that not everyone who’s ever quoted the whole “first rule of fight club” scene has actually watched the movie either.

If someone asked my dad why he hasn’t seen “Little Women,” and he replied that he doesn’t feel any need or desire to do so, the conversation would be over and the justification accepted just like that. I don’t feel any need or desire to watch “Fight Club.” Why do I need to justify myself every time I say I haven’t watched certain “classic” movies?

This is how I like my movies: either animated or slightly stupid but fast-paced enough that I can’t get too frustrated by said stupidity. “Mission: Impossible?” Bring it on. “Zootopia?” Hell yeah. Not every movie I enjoy falls into this category, but if I’m sitting down to watch a movie, most of the time I want to legitimately dissociate from real life for two hours.

I’m not saying I won’t watch “Parasite” or any movie with gravitas, but the double-edged blessing and burden of being a child of the 21st century means I am inundated with serious (and sometimes dismaying) news online. There’s simply no way that any of us have the time, let alone the emotional capacity, to consume every bit of it. So if I spend my day catching up on news that distresses me, I probably am not looking to really think or analyze my streaming choices at the end of the night.

If you haven’t read “For Whom the Bell Tolls,” and I got mad at you for it, you’d probably think it was really weird. If a friend hasn’t listened to a certain new album for an artist they’re not a fan of, no one bats an eye. Why, then, is cinema uniquely endowed with certain paragons that some people seem to consider mandatory viewing?

I don’t really have an answer, and that’s exactly my point here. I can’t really say why I feel no desire to watch “Fight Club”, but that’s part of why I don’t feel a need to watch it. It just sort of doesn’t matter to me. Not watching a movie like “Fight Club” isn’t a hard-and-fast rule; I’ve relented a few times and watched “Pulp Fiction” with a loved one because even though it wasn’t my choice of movie, they wanted to know what I thought and compromise is a necessary part of life (and part of a healthy friendship, if you’re compromising on what to watch on Netflix).

So maybe one day I’ll watch “Fight Club.” I’m just not racing to cross it off any sort of bucket list. You can be upset about it. That’s okay. You’re entitled to your opinion, just as I’m entitled to mine.

Ashley Ravid is a Medill sophomore. She can be contacted at [email protected] If you would like to respond publicly to this op-ed, send a Letter to the Editor to [email protected] The views expressed in this piece do not necessarily reflect the views of all staff members of The Daily Northwestern.