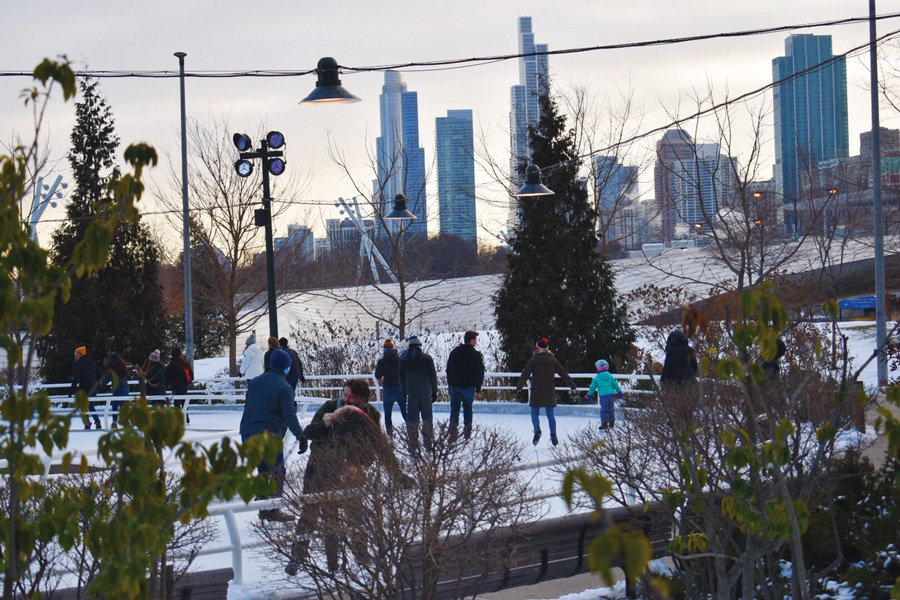 Ice skaters at the Maggie Daley Skating Ribbon. Despite an unusually warm winter, a foundation of ice early in the season and refrigeration systems below the Ribbon have kept the ice solid.

The National Weather Service has ranked this winter as one of the warmest on record, but the Maggie Daley Skating Ribbon keeps its cool.

Open for its sixth season and twice the length of a single lap around a traditional skating rink, the quarter-mile ribbon can hold up to 700 skaters. As it winds in a ring against the backdrop of the Chicago skyline, subtle shifts in elevation simulate rolling hills, so the park brands the Ribbon as “Alpine in the City.”

In an email to The Daily, Chicago Park District press secretary Irene Tostado said a closed loop chiller helps refrigerate the ice. She added that while sunny days contribute to some melting, the ice typically refreezes each morning. Plus, a chilly fall established a solid foundation of ice for the Ribbon early in the season.

“For serious melting to occur, Chicago would need to have a series of consistently sunny and warm days,” Tostado said. “At least 10 straight days for the Ribbon to show signs of wear. We have not seen that in the forecast, as of yet.”

A zamboni runs over the Ribbon regularly to resurface the ice, especially on busy skating days. Visitors can find its schedule on Twitter and time their days accordingly.

Neil Jozefowicz, owner of the Rink Cafe that serves Maggie Daley Park, said the ice remains in solid shape until the temperature surpasses 50 degrees Fahrenheit. The park closes on those extremely warm days.

He also said he appreciates how the park caters to families and children.

Weinberg freshman Lily Meng said the park offered penguin sleds for beginner skaters to cling to as support while they scooted around the track. The feature allowed people of all ages to enjoy the experience, she said.

Meng described the elevation changes as a physical “journey” that was not quite so easy on her leg muscles. But despite the fatigue, she said she had a great time.

“For traditional ice rinks, I feel like all you can do is skate around in circles,” Meng said. “But my friends and I had races against each other, throughout the trail. You pass a lot more people, and interact with a lot more people.”

Admission is free, but there is a fee for rental skates. The Ribbon will remain open until March 15. For the summer season, it will convert to a walking and roller skating path.