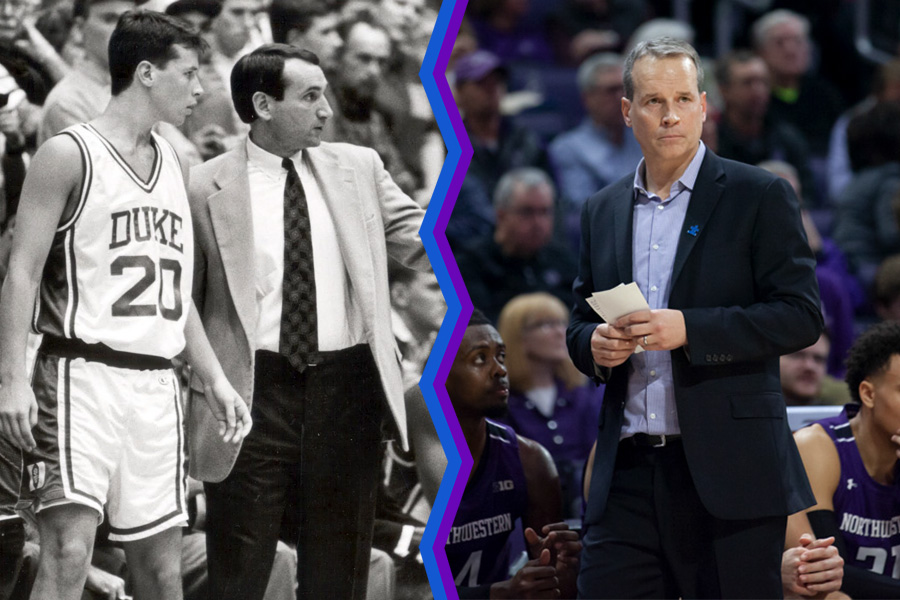 Chris Collins has applied lessons from his junior year at Duke to this year’s Northwestern team.

Men’s Basketball: The 25-year-old lessons Chris Collins carries with him

Just three years ago, Northwestern was in the NCAA Tournament. Now, the Wildcats are the last-place team in the Big Ten and on pace to have their worst season since 2000. Over the next few weeks, The Daily Northwestern will look at the state of Northwestern men’s basketball in a series called “Waiting.” This is the second part of that series.

Chris Collins was sitting in Duke’s players’ lounge 25 years ago, unaware that his basketball life was about to change. So far, his playing career had been a nearly perfect journey –– from an elite Chicago high school basketball player to an impact freshman at Duke to a starting guard on a Final Four team his sophomore season.

Then eleven games into his junior season, Collins dealt with his first real adversity on the basketball court.

In January 1995, Duke head coach Mike Krzyzewski called a team meeting and told the Blue Devils that he wouldn’t be coaching the rest of the season as he dealt with a medical issue. The Blue Devils started the season 8-3, but after Krzyzewski left, the team crumbled.

Duke finished that season at 13-18 and dead last in the ACC, making it the Blue Devils’ worst finish since 1983. Collins has said Duke’s 1995 season has been on his mind as Northwestern is having a challenging season of its own.

The Wildcats (6-15, 1-10 Big Ten) are on pace to have their worst season since 2000, which has been difficult for a noted competitor like Collins. But the two teams Collins has been a part of have a lot of similarities.

That Duke team and Collins’ NU team both relied on three freshmen. Both teams frequently lost close games. And they believed brighter days were ahead of them. After NU lost a late lead to No. 17 Maryland in January, Collins explained his experience at Duke, hoping the Cats can rally together like Duke did 25 years ago.

“Coach Collins experienced major adversity in 1995,” former Duke guard Kenneth Blakeney told The Daily. “And I know that he has adversity with this year’s Northwestern team. Through adversity, there’s two ways you can go. You can be strong or you can sulk and feel bad for yourself. We know you have to face the music.”

It’s hard to quantify how much pressure was on Duke to make it to the postseason. Between 1984 and 1994, the Blue Devils made every NCAA Tournament, advanced to six final fours and won two national championships. According to former Duke forward Ricky Price, the program’s prior success weighed on Collins when he was a player.

“(Collins) had been on teams that went to the national championship game, so he experienced winning,” Price said. “For him, it was a hard pill to swallow when all you know is winning, and then you get to a season where all you know is losing.”

After losing Krzyzewski, the Blue Devils lost 15 of their last 20 games, including 12 games by single digits that season and eight games by five points or fewer. Duke’s conference schedule started with a five point loss to Clemson. In the Blue Devils’ next game, they lost by seven to No. 24 Georgia Tech. Then by 10 points at No. 14 Wake Forest. Then by three points to Virginia in double overtime.

As the team watched a tournament berth slip away, Price said, their frustration snowballed.

“There were so many games we lost that were really, really close,” Price said. “It’s not like we were getting blown out. We were never getting blown out. Since we lost all these close games, it was tough to swallow. The frustration was there because we kept losing.”

According to Price, Collins took Duke’s poor season personally. Collins realized what he was doing “was not good enough,” and that he needed to approach the 1995-96 season in a different way.

“I would easily say that junior year was his toughest year,” Price said “Statistically, he wasn’t having a great year. But that laid the foundation for his senior year, which was magnificent.”

To make sure that change happened, Collins became the Blue Devils’ most vocal leader.

“He saw how what we were doing is not good enough,” Price said. “If you go to practice everyday and you get those results, you have to understand that’s not good enough.”

When Krzyzewski returned for the 1995-96 season, Duke’s late-game issues subsided. In Collins’ senior season, the Blue Devils returned to the NCAA Tournament, and Collins averaged 16.3 points per game and was named to the postseason all-ACC team. Collins had the program back on the right path.

Twenty-five years later, Collins hopes Northwestern’s players will build off a disappointing season the way he did at Duke. Just like with his old team, the coach is throwing young players into the fray and hoping they grow from their experiences.

“Sometimes you learn your biggest lessons through adversity if you handle it right,” Collins said. “You’re being tested. Okay. How important is this? Is it okay to keep losing or am I going to push myself even harder to find a way to win?”

If there’s anyone who understands what this season has been like for Collins, it’s Blakeney, his former teammate. Now, Blakeney is the head coach at Howard University. In Blakeney’s first year with the team, Howard is 2-22 and winless in conference play.

Blakeney said the memories from 25 years ago are valuable to reflect on, and he has faith that Collins can make it work again.

“He’s drawing from the 1995 season because that gives you that feeling that it’s going to be ok,” Blakeney. “He does everything with toughness and enthusiasm, so he knows this challenging time right now will grow into wins. And I know that Chris will have the Northwestern program back into the NCAA Tournament in no time.”