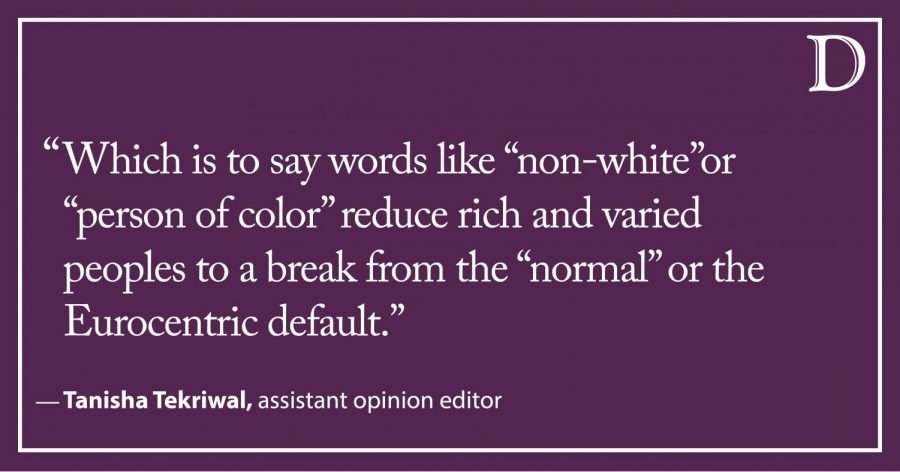 Filling out forms where I have to list race always makes me anxious. I tick Asian, but always hesitate, sometimes adding a small note saying “Indian” in the empty space below. This is not because I’m not Asian or I don’t identify as such, but mainly because I don’t want to misrepresent my history and background.

It is because I have noticed that in common speak, at least in the United States, the term holds a very specific weight and connotation: East Asian.

People sometimes forget how big Asia is — it comprises East Asia, South East Asia, South Asia, Central Asia, North Asia (Asian Russia) and Western Asia (commonly known as the Middle East). People forget too, or simply don’t know, that statistically, the most populous group of these regions is South Asians, not East Asians. (This is not to say another stereotype or default must emerge, only that the existing must be discarded.)

Southeast Asians are often considered the same as East Asians because many people often don’t know about or care enough to draw that difference. Yes, many people from the region can trace their ethnicities to East Asia, but entirely reducing the complexities and circumstances of one geographic region and superimposing it with another is erasure too.

Each region in Asia has its own rich history and should not be lumped together as one undifferentiated expanse. This also goes for Africa, and how we often don’t even differentiate between the different countries and cultures of the region, treating it like one large hallway.

This stereotyping extends beyond regional conflation, but also religious. When many Americans think of “Muslim,” for example, their minds immediately create images of Middle Eastern or North African origin. While the region is lined with Islamic theocracies of “Arabs,” it only accounts for 20 percent of the 1.5 billion Muslims in the world. More than anywhere else in the world, Muslims reside in parts of South Asia and South-East Asia.

It has always surprised me, and surprises me still, that the only American sans prefix of “Asian” or “African” is either a descendant of an age-old settler or the white one who need not prove their origin to anyone. Toni Morrison once said of this christening: “In this country American means white. Everybody else has to hyphenate.” I know that it is difficult for these terms to go out of use, that our hyphenations carry history and culture and pain — many in fact choose voluntarily to identify as such and such is their right. At the same time, it is worth thinking about that it is also a term to make difference, to delineate people into groups that in reality should be one. The question “where are you really from?” is almost always directed toward a person of color. In a similar vein, we need to stop assuming the term “American” is synonymous with white.

And let’s talk about the term “person of color” for a second. A study found that shrinking the world’s population to a village of 100 would provide us a prototype where 27 people are white and 73 are not. Which is to say words like “non-white”or “person of color” reduce rich and varied peoples to a break from the “normal” or the Eurocentric default. The term was perhaps first envisioned as a term for cross-racial solidarity or as a replacement for the derogatory “colored people” or “non-white” which reduce rich and varied peoples to a break from the Eurocentric default. In modern usage, however, it has been used as an easy way to skirt around openly using the term “black” or “Latinx,’ and can sometimes funtion the same way “non-white” does.

One way I can see getting around these terms is using “racially marginalized communities” or “black and brown people” when referring to whole swaths of people. Vijay Prashad’s book “The Karma of Brown Folk” also describes a possible alternative through the words: “I love the word ‘Desi’… Phrases like African-American, Asian-American, etc. are bureaucratic words that do not hold within them the revolutionary aspirations and histories of a people (categorised but not controlled). I prefer words like Black, Desi, Latino, Chicano…”

Prashad’s terminology works for me, though it might not for others. At the very least, it helps provide a framework for the language we can build moving forward.

“The West,” often used in comparison to “other” countries, is a misnomer, but one that is likely to persist for a long time — despite the fact that objections that it refers not to any geographic West but antebellum and outdated conceptions of the world. Analogously, I have heard people use phrases such as “First World plus China, South Korea, Taiwan and Japan.” This almost seems like a gatekeeping of who is considered “developed”— I use this hesitantly— as though no amount of catch-up the rest of the world plays, they will never cross the threshold of European and white civilization.

There’s also the question of misplaced terminology like “third-world,” “developing,” or “peripheries.” These terms introduce the idea of the places they refer to as insignificant or primitive on the European-created barometer. Third-world, for instance, refers to countries that weren’t openly aligned with either side of the Cold War dichotomy. Today, however, it is often associated with poverty or “underdevelopment.” Both usages center the West. “Developing” is a partially accurate term because many countries are, in fact, developing infrastructure and economy, but it still falls short of being a respectful term because the fractured and problematic state of even richer countries is setting the precedent, and ignoring the history of European and American colonial destabilisation of these spaces. “Peripheries”is simply outrageous, even in the economic circles it originated.

Recently, a new term has emerged for these areas and is seeing wide usage: “The Global South.” This term, initially aimed at geographic classifications, refers to the fact that many “underdeveloped” and formerly colonized countries are in the Southern Hemisphere and in academic jargon, it may also refer to poor people living in wealthier spaces.

It does, however, carry a connotation of inferiority and gross generalization and not a good encapsulation of world economic categories. The most inclusive term that is emerging is “Majority World,” a succinct reminder that the rich are the minority and need not be at the center of world narrative. World Bank statistics from 2018 say that nearly half the world lives on less than $5.50 a day, and 80 percent on $10 or less a day.

My purpose in writing this piece was not to list a number of terms that need to immediately be canceled or removed from our daily jargon. It is, however, an attempt to shed light on the simple stereotypes and labels we condone in usage, labels that are not only inaccurate, but ineffective. There are a lot of terms I have not talked about here, both because the list is inexhaustible and because there are terms even I haven’t considered due to my own biases.

We are all part of the problem, and we must all work together to change the language with which we describe our world.

Tanisha Tekriwal is a Weinberg freshman. She can be contacted at [email protected] If you would like to respond publicly to this op-ed, send a Letter to the Editor to [email protected] The views expressed in this piece do not necessarily reflect the views of all staff members of The Daily Northwestern.