Warren’s World: Thinking about Northwestern on National Girls and Women in Sports Day 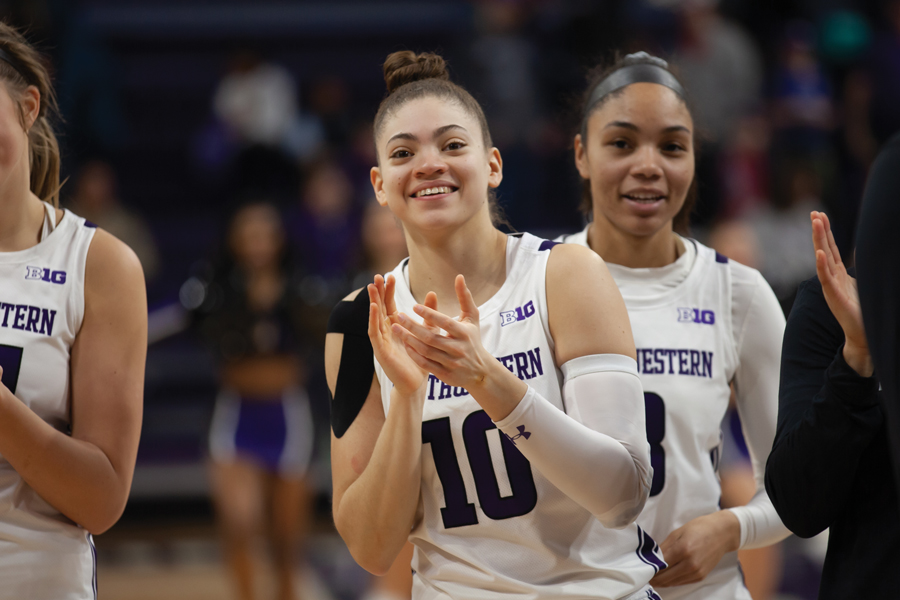 Lindsey Pulliam applauds her team’s effort against Penn State on Jan. 19. The junior is a key member of the No. 21 Wildcats women’s basketball team.

Wednesday was National Girls and Women in Sports Day. Celebrated every February, the holiday aims to inspire women of all ages to achieve their sports dreams, whether on the field, in the front office or anywhere else.

It’s an awesome day — a reminder of the great strides that have been made recently and inspiration to continue to push those barriers further. And here on a quiet Wednesday in Evanston, I thought about what that day means for us at Northwestern.

The Wildcats’ women’s teams are — like they have been since varsity programs were added in the 1970s after Title IX — the driving force of the athletic department’s on-the-field success.

The women’s basketball team is ranked at No. 21 in the country and projected to play at the Fort Wayne Regional. The women’s swimming team is ranked No. 16. The lacrosse team — which has won the school’s only national championships since 1941 — made the Final Four last year. The softball team hosted a Regional and played in a Super Regional last spring. The field hockey team made the NCAA Tournament in the fall. The fencing team has won two straight conference championships. The list goes on and on and on. There are only two women’s teams that finished with a losing record over the past year.

This is nothing new in Evanston. Men’s programs have had more than their fair share of success, but year in and year out, the 11 women’s programs win most of the school’s trophies.

As I sit in the stands or press box at games for these sports, I wonder why more people don’t join me. Sometimes, it feels like I’m in on a secret — that myself and the others in the crowd are the only ones who understand that some of the best sporting events in the Chicagoland area can be found on a Wednesday night at Welsh-Ryan Arena or Sunday afternoon in Ryan Fieldhouse.

After a women’s basketball game between NU and DePaul last December, the Blue Demons’ coach Doug Bruno had something he wanted to tell the assembled press in the Welsh-Ryan Arena media room.

DePaul had just squeaked out a 70-68 victory over the Cats in an objectively great basketball game. The win was his 700th as the Blue Demons’ leader, an incredible milestone for Bruno. He answered questions about reaching the milestone, what his team did down the stretch and on the potential of this year’s NU team. After the media’s questions were exhausted, he added one last thing.

“Thanks for covering women’s basketball,” Bruno said. “I mean it when I say to y’all that we need coverage. It’s hard to get people to write about women’s basketball. So any of you that chose to and do help move the game, I can’t thank you enough for helping us get some publicity for this great game.”

As I sat down to write this column, Bruno’s words popped into my head. I was in the press room that day, and I remember being struck by his words at that moment. It wasn’t the first time I had been thanked by a coach for covering a team or a sport. But most of those other times have been in one-on-ones or small scrums from NU coaches. Here was a coach from a Cats rival in a more formal post-game setup sincerely thanking a room full of media members for covering the sport.

Changing that is not an easy feat. For as much as days like Wednesday serve as reminders of how awesome women’s sports can be, some people will remain skeptical.

For those of you who are skeptical, why not go to an event? You can see what plenty of people are already in the know about.

And besides, it won’t stay a secret forever.

Peter Warren is a Medill junior. He can be contacted at [email protected] If you would like to respond publicly to this column, send a Letter to the Editor to [email protected] The views expressed in this piece do not necessarily reflect the views of all staff members of The Daily Northwestern.