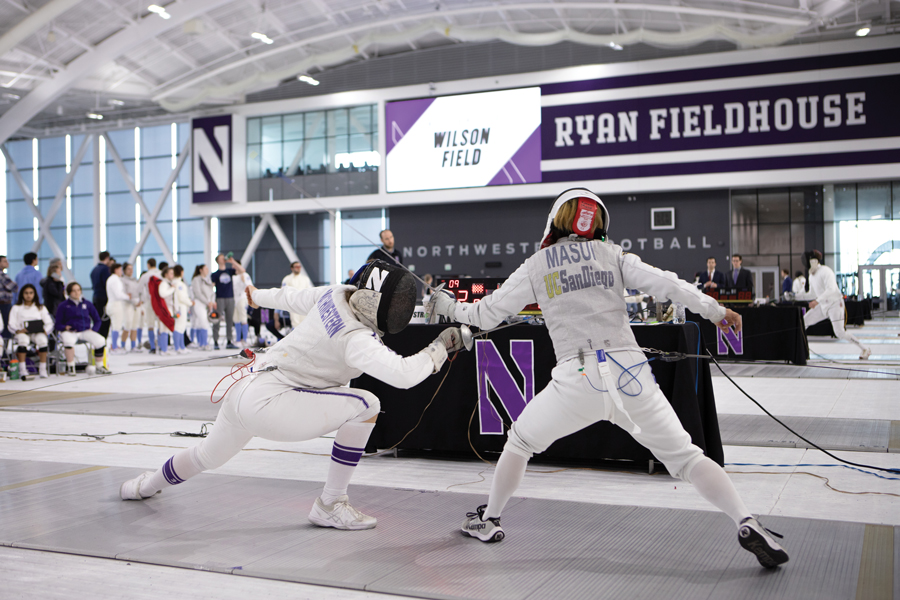 A Northwestern fencer strikes her opponent. The Wildcats went 10-2 in the NU Duals this past weekend.

Coming off a stellar performance at last week’s DeCicco Duals in South Bend, Indiana, No. 9 Northwestern (29-11) returned to Evanston for its biggest tournament of the season.

This weekend at Ryan Fieldhouse, the Wildcats hosted the NU Duals, an event that saw the squad face off against some of the best programs in the country. After 12 matches — including five against top ten teams — the Cats finished the weekend with a 10-2 mark that included upsets over No. 1 Princeton and No. 5 Temple.

“It was exciting,” coach Zach Moss said. “This was really the biggest competition of the year for us in terms of the number of teams and the atmosphere.”

Behind a 7-2 win from the epee squad led by sophomore Julie Falinska and senior Adelle Berdichevsky, NU obtained a 15-12 victory on Sunday over the top-ranked Tigers. Moss cited the team’s unity as a catalyst for the upset.

“Princeton on paper (has) some of the strongest fencers in the country,” Moss said. “But that’s only on paper. It comes down to which team performs the best in that moment.”

Two matches before beating the Tigers, NU avenged a January loss to the Owls (CQ) with a 16-11 win. A 3-0 sweep from sophomore Alyssa Chen helped the Cats’ foil squad triumph 7-2 and lift NU to victory.

NU began tournament play on Saturday against No. 3 Notre Dame, a squad that defeated the Cats by only one point at the DeCicco Duals.

NU’s epee squad thrived against the Fighting Irish, winning 6-3 behind Falinska’s sweep. But Notre Dame’s sabre and foil units won 15 combined bouts, lifting the team to an 18-9 victory and a season sweep of the Cats.

NU won their next five matches.

Against Duke, the Cats edged out a 15-12 victory thanks to strong performances from fencers like first-year foil Anna Biasco, who scored two victories.

After a 17-10 win over Cornell, NU handily defeated its next two opponents — Fairleigh Dickinson and Incarnate Word — by a combined score of 43-11. The squad finished Saturday by narrowly beating the University of North Carolina-Chapel Hill 14-13.

In between the Cats’ two Sunday upsets, NU suffered its second loss of the weekend. No. 4 Ohio State — who beat NU 14-13 in November — bested the Cats by the same score.

Marking the Buckeyes as “the team we need to be able to beat,” Moss said his squad will closely study Ohio State’s fencers in preparation for the upcoming Midwest Fencing Championships.

After defeating the Tigers, the Cats beat the University of California, San Diego 17-10. NU concluded the Duels with commanding victories over Denison and Detroit-Mercy that saw the Cats’ sabre and foil squads go a combined 36-0.

NU celebrated Senior Day during the tournament, honoring Berdichevsky, sabre Abby Tartell and epee Shirley Luong. Berdeichevsky, who finished the weekend with an 8-2 record, said she couldn’t have asked for a better experience.

“It was amazing to see all the support from the underclassmen and fans,” Berdeichevsky said. “All of our time and effort on the team culminated into this one weekend.”