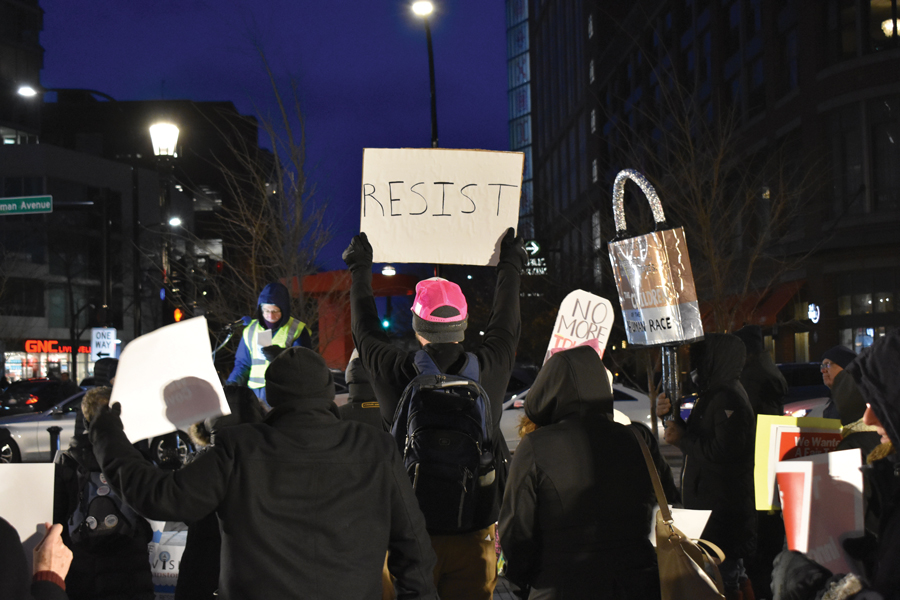 Chanting “no president is above the law,” Evanston residents gathered at Fountain Square on Wednesday to protest the Senate’s acquittal of President Donald Trump.

Evanston resident Brian Gendron said he participated in the rally because he felt the trial was a “sham” and a “cover-up.”

“The GOP is just trying to protect a criminal,” Gendron said. “The president committed an impeachable crime, and he’s getting away with it.”

Ray and Kim Mantych said they traveled from Genoa City, Wisconsin to attend the Evanston rally because they felt it was their civic responsibility.

Ray Mantych said people with “any moral fiber” should understand that Trump broke the law. He said both parties should have acknowledged Trump’s offenses, and next steps include campaign finance reform, term limits and activism.

“You can’t keep posting and talking around the lunch tables at work,” Kim Mantych said. “You have to say something. You have to do something.”

Jackie McKay, who rallied on behalf of the Lake Street Church Peace and Justice Committee, said the trial horrified and outraged her.

McKay said she is surprised that she is marching because democracy in the U.S. is being attacked.

“The GOP and the Senate did not do their jobs,” McKay said. “Everything about it was embarrassing for our democracy.”

Jane Tufts, a longtime Evanston resident, has marched in political demonstrations since the 1960s.

She said she feels the Trump administration has completely undercut the checks and balances process.

“In the meantime, our environment, women’s health, education, all of those really important foundational elements of democracy are being eroded or actively attacked,” Tufts said.

Despite her disappointment, Tufts said she felt hopeful that the trial would trigger a large turnout of young and enthusiastic voters in the 2020 elections.

“I want to set an example for my children, my students, my grandchildren,” Kim Mantych said. They need to see democracy as a process.”