Friends Who Earring together, stay together 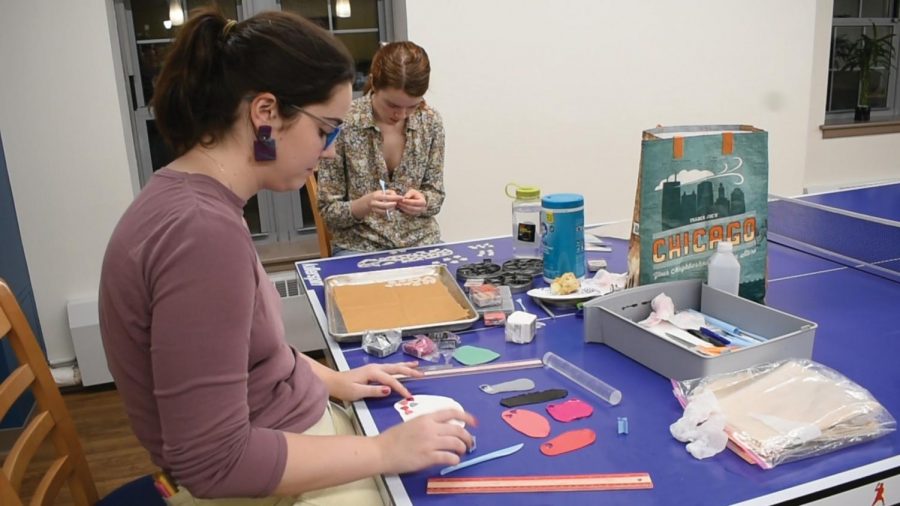 When SESP sophomores Claire Koster and Cate Durudogan were developing their earring business, they went through a lot of potential names. Possibilities included Claire’s Ear Party, Smiling Ear Party and various social justice-themed labels — not all of them were winners. But eventually, they came up with Friends Who Earring, and the moniker has stuck.

The business got its start when Koster showed Durudogan earrings she had made over winter break last year. After they met up at the beginning of Winter Quarter 2019, Koster taught Durudogan how to make them, and they were “addicted.” Koster, jokingly, made an Instagram account for the earrings, and the two began to post about them.

They would wear the earrings regularly and gift them to their friends, but they hadn’t started selling them at that point.

“I would go into the common room of my dorm with just a Ziploc bag full of [earrings] and just force them on people,” Koster said.

Now the business has taken off — Friends Who Earring has over 1000 followers on Instagram and an Etsy account that ships Koster and Durudogan’s creations all over the nation.

However, Koster and Durudogan don’t make any profit off of the earrings they sell. All their proceeds are donated, and go toward a different organization each month.

Friends Who Earring has donated to organizations like the National Queer and Trans Therapists of Color Network last June, in honor of Pride Month, and the Refugee and Immigrant Center for Education and Legal Services. All their proceeds from January are going toward fire support in Australia.

Each month, when selecting an organization, Koster and Durudogan go through a “vetting process.” They try to look for organizations that are community-centric rather than larger international organizations.

In September, when they decided to donate to an organization that would help fight the fires in the Amazon, Koster and Durudogan chose Associação Floresta Protegida, a nonprofit that represents indigenous communities. They did run into some communication and transactional difficulties when transferring the money — the organization was based in Brazil — but ultimately, the group better aligned with the values that they wanted to support.

“It was worth it, in my opinion,” Durudogan said. “Because reading about them, you saw exactly what they were able to accomplish. And it matched their needs more directly, and they were very clear about that.”

As their earring business has expanded, Weinberg sophomore Francesca Rosen, who often helps during the earring-making process, said she found it especially interesting to see the evolution of both their styles.

“Especially in the beginning, Claire would make some when she was just making (earrings) by herself and then, Cate would start making a style and then (Claire would) be like ‘Ooh, I like that,’ and start doing it,” Rosen said. “They’ve definitely done that to each other, which is a bit fun to see. There’s some that are kind of hybrids of each other’s types.”

Koster and Durudogan said they never planned to make a business — both of them are training to be teachers. But Koster said it’s just an indication of “the weird things that life takes you to.”

However, both said they are glad they were able to find such a rewarding, creative outlet. They added that one of the best parts about seeing the earrings (and the people that wear them) around campus is the sense of community they feel with their customers.

“(I) feel more at home seeing people wearing earrings that I made and them not knowing me but I know them,” Durudogan said. “That’s awesome, and then if I have the moxie that day to introduce myself and be like, ‘Actually, I made those earrings, I’m Cate,’ then it’s like (I’ve made) a new friend.”