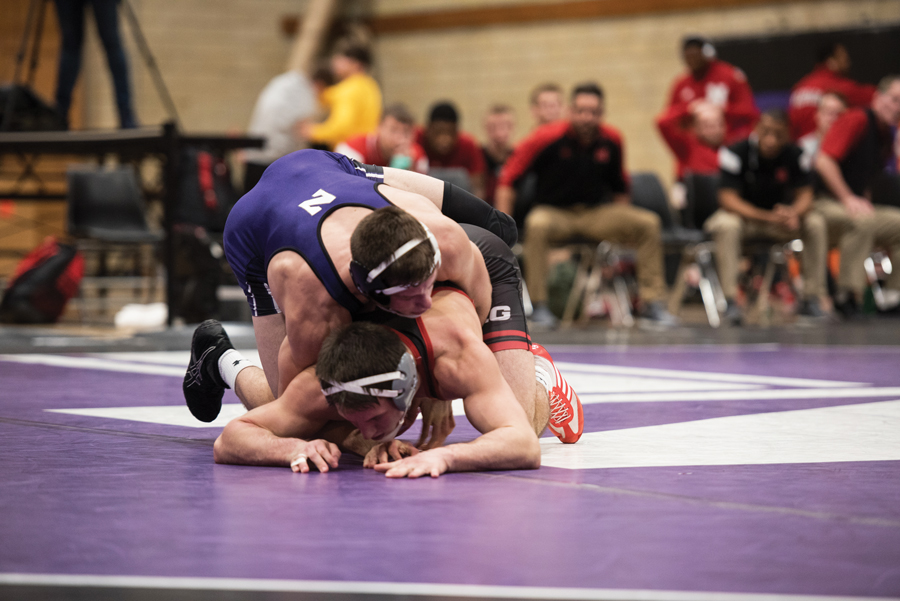 Ryan Deakin wrestles an opponent. The junior improved to 13-0 in his bouts this season with a win on Sunday.

On Sunday, Northwestern traveled to Champaign, Illinois for a battle against in-state rival Illinois, where they lost 19-18. The Wildcats have now lost four of their first five conference games, with their lone win coming against Indiana.

Deakin, the No. 1 wrestler at the 157-weight class, brought his record to 13-0 this season by pinning Fighting Illini class Eric Barone. Thomas won the match before Deakin and, after the redshirt junior’s victory, Oster and Morland won their respective matches as well. Initially down 11-0 heading into those matches, NU jumped out to a 15-11 lead with three wrestlers remaining.

However, the Cats only won one of those matches and, in the final match, redshirt freshman Jack Heyob lost a majority decision to Illinois class Luke Luffman in the 285 bout.

This is the second straight time that NU has traveled on the road to Illinois and come up just short. Two years ago, the Wildcats faced the Fighting Illini on the road and lost by one point, that time by a score of 18-17. However, last season, NU blew out their in-state rival 25-12.