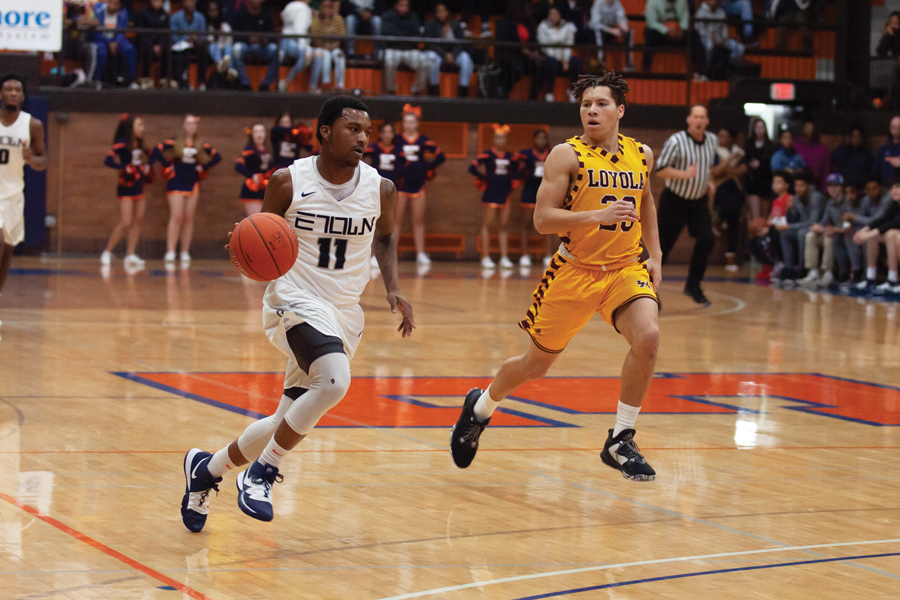 Junior Daeshawn Hemphill dribbles a basketball down the Beardsley Gym court as a Loyola Academy player runs beside him. Hemphill is part of the all-junior starting lineup on the Evanston Township High School boys varsity basketball team.

The huddle: it’s an old staple of team sports. But for the boys who don Evanston Township High School jerseys and play in Beardsley Gym, it’s a fairly new ritual.

Junior Blake Peters, who has played with the ETHS boys varsity basketball team since his freshman year, said his team huddled up less frequently in years past. However, after their first loss this season, they decided to circle up before every game. Junior Logan Talmage said the huddles help them “stay together like a family.”

The Wildkits have won 21 games out of 24 this season. The team is currently ranked fifth in the state, according to the Chicago Sun-Times, but many players said they don’t worry about their rank — their biggest focus is on playing each game and working together.

“As a team, we’ve come together more, and I think that’s helped us,” Talmage said. “And even though we’ve been going through some rough spots lately, I think since we’re sticking together, we’ll definitely be able to get through it, and probably even improve from it.”

Last week, the Wildkits lost two games in a row before winning on Saturday against Oak Park and River Forest High School.

Assistant coach Rudy Meo said the team can grow from the losses.

“Those moments are teachable lessons too,” Meo said. “They’ll help us with the growth that we are experiencing right now.”

The week before that, the Wildkits won against Bloom High School’s team, which has multiple seniors committed to Division I college teams.

“Our coach, our staff, the players, we came in focused,” he said. “I feel like we were prepared to win the game even though people didn’t think we would. We came out strong. We didn’t come out playing scared, we came out playing confident, and it was a great win. The locker room was very excited after the win.”

Bull added that in general, their success takes many people by surprise, since they consider the team as too young to succeed. Only juniors comprise the Wildkits’ starting lineup, and just a few seniors play for the team.

Starter Isaiah Holden said every time he steps on the court, he knows the Wildkits are a special team.

“This year, I felt like we were going to be a very good team, just knowing how much my teammates work out and be in the gym,” he said. “Knowing that we’re the underdogs, we just have to work harder than other teams and I feel like we’ve been doing a good job with that.”

Last year, three seniors — whom Meo called the “all-time winningest trio in Evanston history” — graduated. During the 2018-2019 season, the Wildkits made it to the State Championships for the first time since 1984.

If the Wildkits qualify for the championships this year, it would be at least the fourth state championship game in ETHS history, according to Illinois High School Association boys basketball season summaries. Holden said a win would mean a lot to them and their fans, because the team placed third in Class 4A in 2018 and second in 2019.

Before they can think about the championships, they need to advance to and through the playoffs. Many players said it was important that they not underestimate their opponents.

“We can’t let (winning) get to our heads because we have a big stretch ahead of us,” junior Jake Vasilias said. “In the playoffs, we have to keep focus and stay locked in.”

Holden and Bull both said people may only see the wins, rather than the work they put in. The team practices nearly every day and watches film of their playing to improve.

Beyond practice, Holden added that the team’s “brotherhood” helps them succeed. Many of the players have played together or against one another since they were children. Now, they bond through team dinners and spending time with one another outside of basketball.

“If someone has an off game, then the next person’s going to step up and contribute, and that doesn’t come without having that brotherhood,” Holden said. “We’ve become so close that we all know how one another plays. That’s special.”