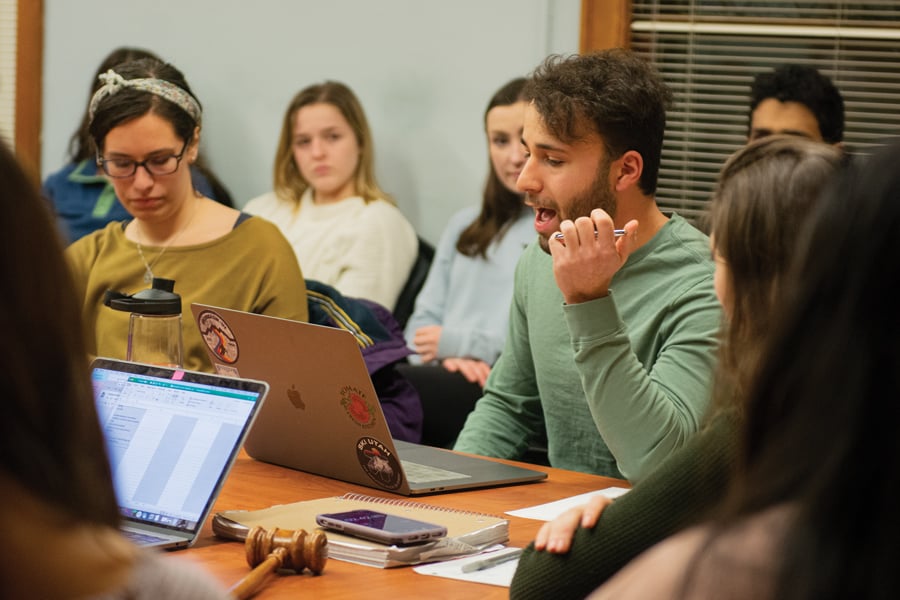 Weinberg sophomore John Magloire argues that the trial for President Trump’s removal was not a waste of time. Political Union sided with Magloire in an 8-16 vote.

Northwestern University Political Union debated whether the trial for President Donald Trump’s removal is a “waste of time” at its Monday session. Meeting attendees voted against the resolution 8-16 with one abstention, deciding that the trial was not a waste of time.

The vote comes after House managers and the president’s legal team closed arguments on Monday. The Senate is set to vote on his removal on Wednesday. Since the Senate voted against calling witnesses last Friday, Trump’s acquittal has been all but certain, leaving it up for debate with some whether the trial was a waste of time.

“We all already knew what the outcome will be,” Sperti said. “This isn’t about the Ukraine incident. It’s about the Democrats’ venting their hatred of Trump.”

Sperti also questioned Democratic lawmakers’ decision to impeach Trump for abuse of power and obstruction of justice over bribery, seen as a more specific and explicitly impeachable offense.

Opposing Sperti’s position, Magloire said the impeachment had value in what it showed the American public about the Republican party.

“That the trial is going to end with acquittal does not mean that it is a waste of time,” Magloire said. “At least now voters have a clear image of how government functions when Republicans are in charge.”

Weinberg senior Jake Gordon, a former Daily columnist, said during floor discussions that even though Trump’s actions were immoral, they did not seem extreme enough to warrant impeachment.

Gordon added he was not convinced that Democrats had a strong enough reason to pursue impeachment, considering that the trial would not end in Trump’s removal or change voter’s opinions.

“Why does their need to be a political goal and agenda? Shouldn’t we impeach people on principle?” Weinberg sophomore Pamela Chen said in response.

Responding to the floor discussion, Sperti said she rejects the idea that the impeachment is important in holding the president accountable, and that doing so does not change peoples’ minds. She said that the government should be reluctant to use “the most heavy-handed way of holding someone accountable.”

Magloire addressed the pro arguments and argued that the impeachment brought national attention to the president’s wrongdoings.

“If this impeachment was a waste of time, then we might as well get rid of the institution of impeachment,” Magloire said in his closing statement. “The point is that we are sending a message that if you’re the President of the United States you cannot commit a crime.”