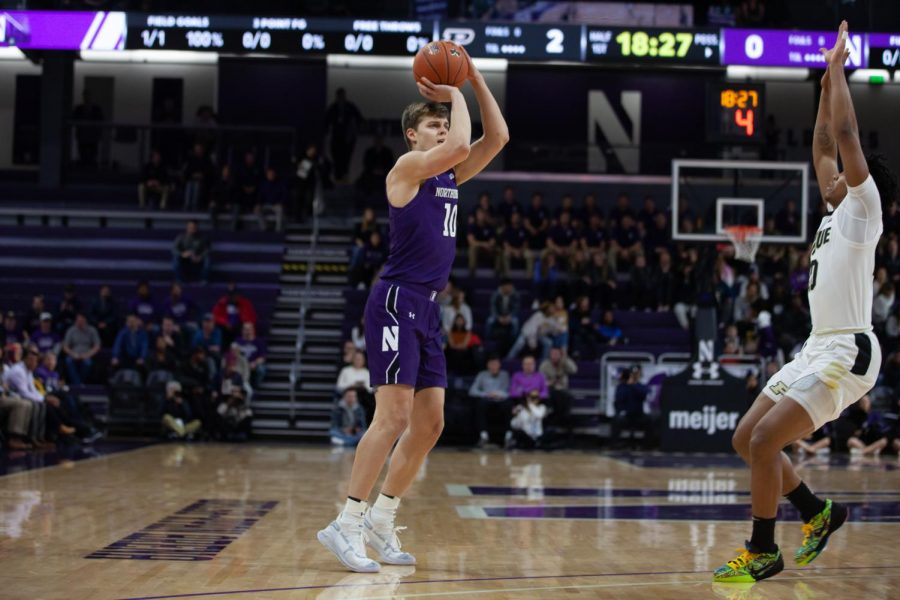 Miller Kopp shots a three pointer. The sophomore forward nailed three three-pointers from behind the arc on Saturday.

After suffering its most lopsided loss of the season at the hands of Michigan State on Wednesday, Northwestern returned to a more familiar script on Saturday against Purdue.

With just under three minutes remaining, the Wildcats (6-15, 1-10 in Big Ten) held a 58-50 lead, with victory in their sights. For NU, it was an opportunity to not only earn a second Big Ten win, but also to break through in the clutch and exorcise the late-game demons that have plagued the Cats as of late.

“It’s human nature, when you’ve been in this situation and you’ve struggled, until you break through, it’s on your mind,” coach Chris Collins said. “Everybody on the staff, it was all positive reinforcement — tonight is the night we’re going to win.”

Instead, the Boilermakers (12-10, 5-6) scored the final 11 points of the game, including the go-ahead bucket by sophomore guard Sasha Stefanovic with just four ticks on the clock to steal a victory. The 61-58 defeat gave NU, which failed to score in the final four minutes, its tenth conference loss of the season.

“I really feel for our guys,” Collins said. “When you’re a young group and in a league like ours, these are the moments that test your mettle. We closed the game with three freshmen and one sophomore on the floor. The only way you figure out is by being in these battles.”

The Cats found early success with sharp 3-point shooting, an area where they have struggled throughout the season. Sophomore forward Miller Kopp, who finished with a game-high 15 points, contributed three triples in the opening frame, while Purdue shot just 38 percent from the field and found little success inside the paint.

After redshirt freshman center Ryan Young sank a pair of free throws to extend NU’s lead to six, the Boilermakers scored the next seven points to take the lead just over two minutes into the second half. Instead of folding, NU unleashed freshman guard Boo Buie, who connected on three straight 3-pointers to bump the Cats back up to a 42-35 lead.

“Buie’s a talented player,” Purdue coach Matt Painter said. “He’s one of those guys who can score in spurts. We knew that he could score the basketball. Those stretches by Kopp in the first half and Buie in the second half were huge.”

NU stayed in control for the next ten minutes and boosted its lead to eight points on a contested baseline jumper from Kopp with just over four minutes left. Then, the Cats’ offense went silent, with three misses from beyond the arc and three turnovers comprising NU’s final six possessions.

Purdue tied the game on guard Jahaad Procter’s long three with 53 seconds to play, and when graduate guard Pat Spencer’s errant pass to Young was ruled Purdue ball after video review, the Boilermakers had an opportunity to seal the comeback. After rounding the 3-point arc, Purdue guard Eric Hunter Jr. dished the ball back to the left corner to Stefanovic, who launched the game-winning three over the outstretched arms of senior forward AJ Turner.

Saturday marked yet another gut-wrenching home loss for NU that slipped away in the final seconds. Collins hopes that the tough lessons the Cats are learning will lead to wins, whether over the next couple games or further down the road.