Garcia: “It’s the courts, stupid”: Why McConnell and Senate Republicans must be defeated in 2020 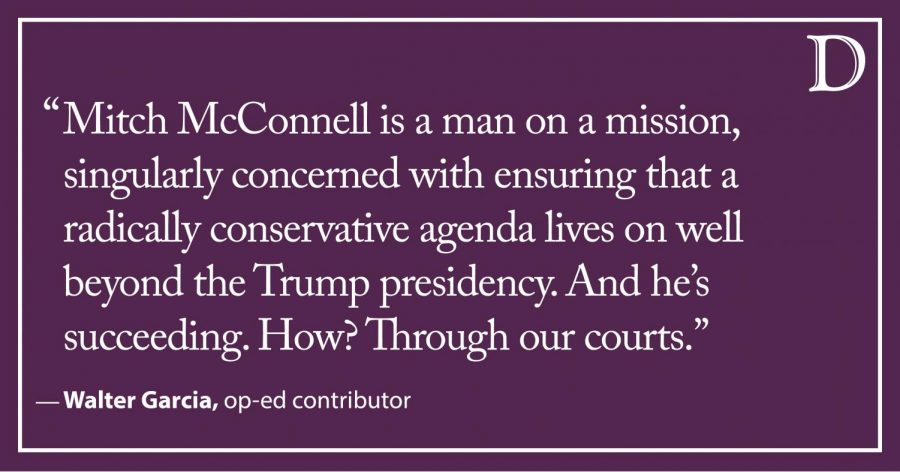 “Walter, you know how to deal with a bully, right? With a two-by-four, that’s how. Bullies usually can’t be reasoned with.” That’s what a friend once told me, and though I hadn’t thought of those words in some time, they are incredibly relevant.

At present, in the United States of America, the Republican Party — a party that not even Ronald Reagan would recognize as his own — is teeming with bullies. Donald Trump’s name is the first that comes to mind, of course, and for good reason. Yet there is another bully, and a more effective one at that, who merits close scrutiny: Sen. Mitch McConnell (R-Ky.). The majority leader, he is a man on a mission, singularly concerned with ensuring that a radically conservative agenda lives on well beyond the Trump presidency.

And he’s succeeding. How? Through our courts.

Article II, Section 2 of the U.S. Constitution states that the President “shall nominate, and by and with the advice and consent of the Senate, shall appoint ambassadors, other public ministers and consuls, judges of the Supreme Court, and all other officers of the United States.” In other words, on the critical issue of judicial appointments, there is no role to be played by the House of Representatives. The Senate, currently home to a Republican majority, is the only chamber of Congress that matters. Their webpage on “Powers & Procedures” rightly observes that the “Senate has always jealously guarded its power to review and approve or reject presidential appointees to executive and judicial branch posts.”

However, what McConnell has engaged in over the course of the Trump presidency, and in the years leading up to it, is far more than a jealous guarding of sorts. As suggested earlier, it can be more accurately characterized as a relentless obsession with stacking our courts with extremely conservative judges.

After all, we would do well to remember that, in 2016, he denied President Barack Obama the opportunity to fill a Supreme Court seat because, he alleged, it was an election year, and the American people needed to have a “voice” in the process. Then, in a complete about-face, as CNN reported this past year, “McConnell said…if a Supreme Court vacancy occurs during (the 2020) presidential election, he would work to confirm a nominee appointed by President Donald Trump.” In fact, CNN continued, “(t)he leader took a long sip of what appeared to be iced tea before announcing with a smile, ‘Oh, we’d fill it,’ triggering loud laughter from the audience.”

Further, McConnell was instrumental in pushing through the confirmations of Justice Neil Gorsuch and Justice Brett Kavanaugh. The effect of those confirmations cannot be understated: it gave conservatives a reliable majority on the Supreme Court, something that had not happened since the New Deal. In turn, McConnell has been richly rewarded. For instance, the Court’s now-conservative majority has held that partisan gerrymandering claims — no matter how egregious they might be — are nonjusticiable.

Additionally, the now-conservative majority has given the Trump Administration the green light to implement its “public charge” rule. Essentially, the government can now consider the wealth of an individual when deciding whether to allow that individual into the country or to grant them a green card. If you’re well-off, you have nothing to worry about. But if you’re not, and immigration officials decide that you may use public-assistance programs, then you’ll be considered a “public charge” and be out of luck. As if that wasn’t bad enough, currently pending before the Court is a case that the now-conservative majority may use to chip away at a woman’s right to choose.

From first-hand experience, I know that the damage wrought by McConnell extends beyond just the highest court in the land. It has also impacted, in an even more dramatic fashion, our nation’s lower courts: our federal appellate courts and district courts.

In the summer of 2019, I had the privilege of serving as a law clerk on the Senate Judiciary Committee for Sen. Kamala Harris (D-Calif.). In that capacity, I was responsible for learning about and evaluating judicial nominees who came before the Committee, all of whom were nominated to serve on a federal district or appellate court. Simply put, one too many of those individuals subscribed to a form of conservatism that belongs in a distant past. And yet, overwhelmingly and eagerly, McConnell ensured they received a floor vote. To receive a floor vote amounted, and continues to amount, to receiving a golden ticket: it meant that McConnell was confident that a particular nominee could garner a majority of Senators’ votes.

A sampling of the extreme conservatives confirmed by McConnell has been put together by HuffPost. I urge you to take a look at it.

Relatedly, what cannot be overlooked is Article III, Section 1, which states the following: “The judges, both of the supreme and inferior courts, shall hold their offices during good behaviour, and shall, at stated times, receive for their services, a compensation, which shall not be diminished during their continuance in office.” In layman terms, “good behaviour” means that federal judges have life tenure. In order to be removed, they, like the President, must undergo impeachment. This hardly ever happens. Since the founding of our country, “the House of Representatives has impeached only 15 judges… and only 8 of those impeachments were followed by convictions in the Senate.” That is to say, once a judge has been confirmed by the Senate, it’s pretty much game over.

All of this can change — not only if McConnell loses his job in 2020, but if those Republican Senators who have blindly followed McConnell’s lead do, too. As improbable as it sounds, flipping the Senate from Republican to Democratic control is not a lofty goal.

As political analyst Charlie Cook explained, “On a very superficial level, the Senate picture in 2020, with 23 GOP seats up to only 12 for Democrats, is the opposite of 2018, when Democrats had 26 seats up to just nine for Republicans.”

While Democrats have done a poor job in communicating to voters the importance of the courts, there are signs that that’s beginning to change. On February 8, Demand Justice, the Center for Reproductive Rights, and NARAL are organizing a presidential forum entitled “Our Rights, Our Courts,” the first of its kind this election cycle. Additionally, my former boss, Harris, recently underscored that “[d]uring the time when articles of impeachment are before the Senate, it would be wholly inappropriate to advance the president’s nominees to the federal judiciary.” In a rare showing of bipartisanship (and common sense), Graham, the Chairman of the Senate Judiciary Committee, agreed.

I started this piece by saying that, when it comes to bullies, a two-by-four may be necessary. So what’s our two-by-four? Donating, volunteering, and voting for Democratic candidates to the Senate in the upcoming 2020 election.

President Franklin Delano Roosevelt famously said, “The only thing we have to fear is fear itself.” It’s long past time we stop fearing the likes of McConnell, a man who, at a Kentucky rally with Trump last year, brazenly stated that his motto is “leave no [judicial] vacancy behind.”

Let’s get to work. Our courts, and our American experiment, depend on it.

Walter Garcia is a second year law student. He can be contacted at [email protected] If you would like to respond publicly to this op-ed, send a Letter to the Editor to [email protected] The views expressed in this piece do not necessarily reflect the views of all staff members of The Daily Northwestern.