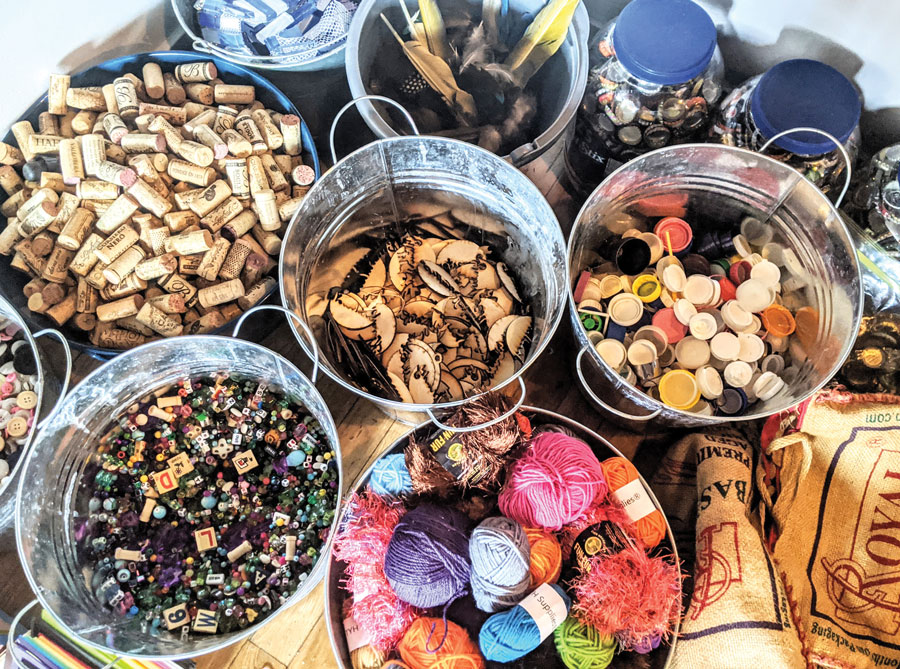 Over 75 percent of the materials at Art Makers Outpost comes from partnerships and contributions in order to prevent items from ending up in landfills. Repurposed items include old milk crates and coffee cans.

Paper towel rolls and plastic caps might seem like items meant for the recycling bin. But Valerie Kahan thinks differently. She does not see these things as garbage, but rather as art materials.

“Art has always been a way to communicate,” said Kahan, who serves as Art Makers Outpost’s creative director. “What better way to communicate sustainability, environmental awareness and social responsibility than through art?”

Art Makers Outpost is located on the second floor of Ice House Gallery, 609 South Blvd., which is owned by the outpost’s co-founder, Hannah Litvan. The outpost offers classes, camps and workshops. Some center around a theme or technique, while others are free-form open studio hours. Kahan said workshop dates will be announced in February and after-school classes will begin in March.

Programs for older audiences include Outpost After Dark, a BYOB event for adults, and Teen Nights designed for those ages 13 to 18. There are after-school classes, spring break camps and summer camps geared toward children ages 7 and older. Kahan said the studio hopes to offer options for younger children in the future.

Art Makers Outpost bases its business model on contributions and partnerships. It collects what Kahan called business’ and residents’ “useable, clean waste and excess.” Desired items include scraps of fabric, old milk crates and coffee cans. Whatever is donated forms the foundation of the art students create. Over 75 percent of the materials at Art Makers Outpost come from partnerships and contributions to prevent items from ending up in landfills, according to a news release.

“We all know the environment is suffering,” Kahan said. “We know that it’s up to us, since future generations are going to inherit and be responsible for whatever we leave them with.”

In addition to being “green and clean,” Kahan said it’s important that Art Makers Outpost is financially accessible. She said a limited number of barrier-free partial scholarships are available, distributed based on personal inquiries and availability.
Art Makers Outpost also created a philanthropic initiative, Outpost Gives Back. The initiative includes pop-up art events for nonprofits, community building efforts and a program called Art From the Heart.

Art for the Heart involves packaging the studio’s extra supplies into small art kits and donating them to local family and children’s organizations. Art from the Heart is led by Henry and Samantha Carr, Kahan’s children.

Litvan, who opened Ice House Gallery in 2017, said she and Kahan want to expand the artist community in South Evanston through Art Makers Outpost. She said while South Evanston is a “cool, fun area,” it’s underserved; it does not have many businesses or activities for those who live there. Litvan hopes to draw art southward through the new space.

“We’re bringing something to South Evanston that the community can do together,” Litvan said. “We want people to grow into artists and think broadly as well as creatively.”

Art Makers Outpost has come together over a few months, but Kahan said every decision made works toward its all-encompassing goal of creating a community where everyone feels “welcomed, empowered and safe to be themselves.” Kahan said she looks forward to serving Evanston, teaching art as well as inclusivity.

“I wrote the business plan for Art Makers Outpost about 10 years ago, but then life got in the way for a while,” Kahan said. “Seeing the space come alive is my dream come true.”