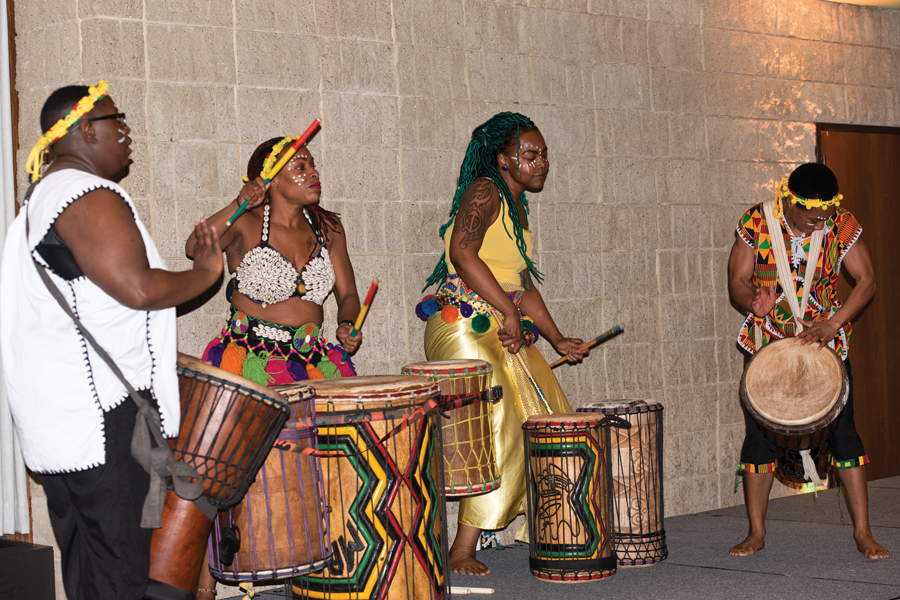 Harambee was held at Norris University Center on Friday. The event kicked off Black History Month programming at NU.

For Members Only hosted the annual Harambee celebration at Norris University Center on Friday to kick off Black History Month programming. The event, co-sponsored by Multicultural Student Affairs, featured student and community performances, including dance, song, and spoken word.

Harambee, named after the Swahili word for “all pull together,” has been a community event at Northwestern since around 2009. The event was originally hosted on Sunday afternoons where black communities from surrounding neighborhoods could have a place to celebrate after attending mass.

D’ana Downing, a graduate assistant at Multicultural Student Affairs, gave the Native American land acknowledgment in the form of a poem about the African-American Father of Chicago, Jean Baptise Point du Sable, and his marriage to the daughter of a Potawatomi chief.

Student performances included those by a cappella groups like Soul4Real, Northwestern’s premier African-American a cappella group, and Afrothunda, a dance troupe that mixes traditional and modern African dance moves and music.

“It’s a great way to have that type of energy and vibe coming into Black History Month,” Downing said. “It’s always exciting to enter into a space with fellowship and community.”

For Medill sophomore Imani Harris, events like these help lift her mood. Harris said she tries to attend all black student group events on campus “because there aren’t a lot of black events or black spaces made.”

“A lot of times we don’t get to see ourselves in college be creative,” Harris said. “We always just produce academic work, so it’s fun to just see the other side of people. To see them dance and sing and have a good time.”

Linus Okoth, a McCormick freshman, said the event taught him more about the history of black students at Northwestern. Okoth said he especially enjoyed the poetry performance because it showcased a lot of African culture.

During the event, FMO revealed Washington D.C. as the location of their annual, University-sponsored spring break trip.

“This year we’re going to D.C. because of this being election year. It felt very topical,” FMO coordinator Austin Gardner, said.

Gardner said he was happy to “to be surrounded by so many black people and see so many beautiful performances” on the eve of Black History Month. He added he was especially excited for Dominique Jackson, a black trans model and activist, to speak at the rescheduled FMO-sponsored State of the Black Union event later this month.

Downing, who specializes in African American student affairs, said she encourages students to be more involved in this year’s Black History Month, especially intersectional programming such as upcoming community nights with APIDA and LGBTQ communities.

“We’re so excited for this to be just the first program,” Alyscia Raines, assistant director of MSA, said. “We’re looking forward to (the community) joining us for the remainder for the month and the programming that is to come.”