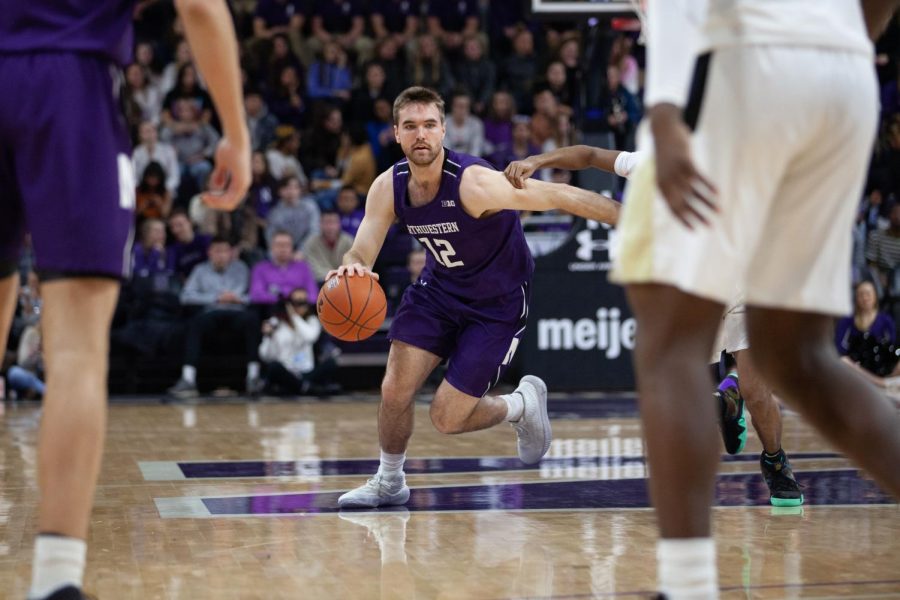 Pat Spencer dribbles by a defender. The graduate transfer guard finished the game with 10 points and 7 rebounds.

With 13:10 remaining in the second half, freshman Ryan Young hit a free-throw to give Northwestern a 10-point lead. But, this wasn’t the first time that the Wildcats have had a lead in the second half and blown it.

NU has had trouble closing games all season and this game was no different. Purdue battled all the way back and made it a three-point game with just 1:24 remaining in the second half.

Off of a miss from freshman Robbie Beran, Purdue’s Jahaad Proctor hit a three to tie the game up at 58 with 53 seconds remaining. On the Cats ensuing possession, Young mishandled the ball off a pass from Pat Spencer, giving Purdue a chance to win the game on the final possession.

And the Boilermakers’ Sasha Stefanovic delivered, making the game-winning shot with 3.1 seconds to give Purdue (12-10, 5-6 Big Ten) a 61-58 victory. Graduate guard Pat Spencer had a chance to win it late, but couldn’t make a contested shot. NU (6-15, 1-10 Big Ten) once again came up just short after having momentum late in the game.

Offensively, the game was a tale of two halves with the first half being a struggle to buy a basket early on before both teams caught fire in the second half.

Early on, the Cats relied on graduate guard Pat Spencer to keep them afloat early on, hitting a few floaters to keep NU in the game. But it was the younger players who helped the Cats extend their lead.

Sophomores Miller Kopp and Pete Nance combined to hit three three-pointers to give NU a four-point lead late in the first half. The two teams traded baskets and went into halftime with the same point differential.

In the second half, Buie was the star of the show. Purdue came out hot to start the second half and took their first lead of the second half with 16:59 left. Then Buie put on a shooting clinic and NU never looked back. The Boilermakers made it close, cutting the deficit to three with a little over a minute and a half remaining.

For the game, the Cats shot 42.9 percent from the arc, one of their best performances of the season. Aside from Buie, Kopp hit three threes and freshman forward Robbie Beran hit two of his own.

1. Offense gets off to a bad start on both sides
Offense has been hard to come by for NU and Purdue so far this season — the teams are in the bottom three teams in the conference in scoring. The first eight minutes of the game were sloppy for both teams, as the Cats and Boilermakers combined for 14 points and 6 turnovers, It wasn’t until after the second media timeout that both teams finally started to find their rhythm.

2. Purdue pressures Spencer and other primary ball handlers
A pillar of NU’s offense for years has been the use of the pick and roll to create opportunities on offense. As a result, the Boilermakers came out with a game plan to try to counteract the Cats offensive gameplan by double teaming NU’s ball-handler in an attempt to force turnovers.

At first, NU was having trouble with the pressure from Purdue — making sloppy passes and the Boilermakers’ active hands had the Cats flustered early. But NU eventually found the answer and was able to find the open man off the pick and roll. In the second half, Purdue put full-court ball pressure on the Cats in an attempt to force more turnovers and cut into the NU lead.

3. Boo Buie is still NU’s go-to guy
Early in the season, before freshman guard Boo Buie got injured, Northwestern turned to the freshman for an offensive spark frequently. And for the first time since he returned from injury, Buie provided just what the Cats needed.

In the midst of a Purdue comeback, the freshman guard from Albany, New York hit three straight threes to give NU a 7-point lead. But unfortunately, as has been the case for most of the season, the Cats couldn’t finish the job down the stretch. NU blew yet another lead as the Cats suffered their 6th-straight loss. However, it was still encouraging to see the freshman guard have the same impact he had earlier in the season.