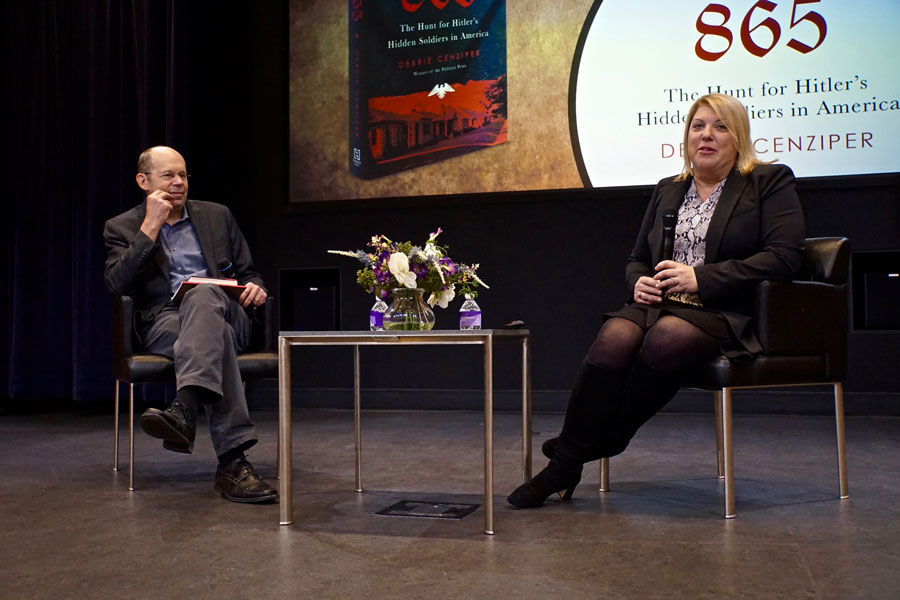 Medill Profs. Alex Kotlowitz and Debbie Cenziper in the McCormick Foundation Center Thursday. Kotlowitz moderated a discussion of Cenziper’s book “ “Citizen 865: The Hunt for Hitler's Hidden Soldiers in America,” which follows a team of Nazi hunters in the U.S. Department of Justice.

The book, which was released in November 2019, follows a team of Nazi hunters from the United States Department of Justice as they worked to investigate killers known as Trawniki Men, named after the Polish village where they helped murder entire populations of Jews.

Cenziper, who is also Medill’s director of investigative reporting, said she discovered this story at a cocktail party in 2016, where she said she “fell into conversation” with a DOJ lawyer. She said he told her about the work of the department that spent decades searching for Nazi war criminals that lived in the U.S. after World War II.

“I was fascinated by it because I remember thinking, ‘How is it possible that there are still Nazi war criminals, collaborators, murderers, living in the United States more than 70 years after the war?’” Cenziper said.

While the book focuses on Nazis living in the U.S., there is also a parallel story that follows two teenagers, Feliks and Lucyna. They lived in Lublin, a Polish town that was “decimated by the Nazis” until they fled to Warsaw. Cenziper said they eventually made it to the U.S. in 1950, just one year before Jakob Reimer — the primary Trawinki man who Cenziper follows in the book — moved to America. Cenziper said Reimer was known as Citizen 865, his Nazi identification number, which inspired the title of the book.

Cenziper said she decided to include the story of Feliks and Lucyna to give the story an element of humanity.

“These were people who were impacted,” Cenziper said. “It’s this love story, it’s this incredible story of two survivors. I could not stop until I heard their story, it was that incredible to me.”

The conversation was moderated by Medill Prof. Alex Kotlowitz, who called the book a “triumph” of storytelling.

He added that despite the dark setting of the war, Cenziper’s ability to find a sense of “hope” and “light” in this period was an accomplishment.

“I was given it on a Friday and had devoured it in a matter of a couple days,” Kotlowitz said. “It really is a masterpiece of storytelling, of narrative.”

Cenziper’s research process was another part of what audiences found fascinating about the book. She said she spent hundreds of hours interviewing individuals, including DOJ employees, as well as going on multiple trips to Europe — particularly Poland — and scanning historical documents from the era.

Medill junior Dan Rosenzweig-Ziff attended the event and he said he appreciated how emotionally attached Cenziper was to Feliks and Lucyna’s story in the book.

“I thought it was really interesting to hear how she went about doing the reporting, and just the process of finding the story,” Rosenzweig-Ziff said.

Ultimately, despite the horrific events of the Holocaust, Cenziper said the book does have a “happy” ending.

“It’s a story about hope,” Cenziper said. “The fact that there were men who were brought to justice — not just the men of Trawinki, but more than 100 Nazi collaborators living in the US were identified by this tiny unit inside the Justice Department despite widespread pushback both here and abroad — it’s a story that needed to be told.”