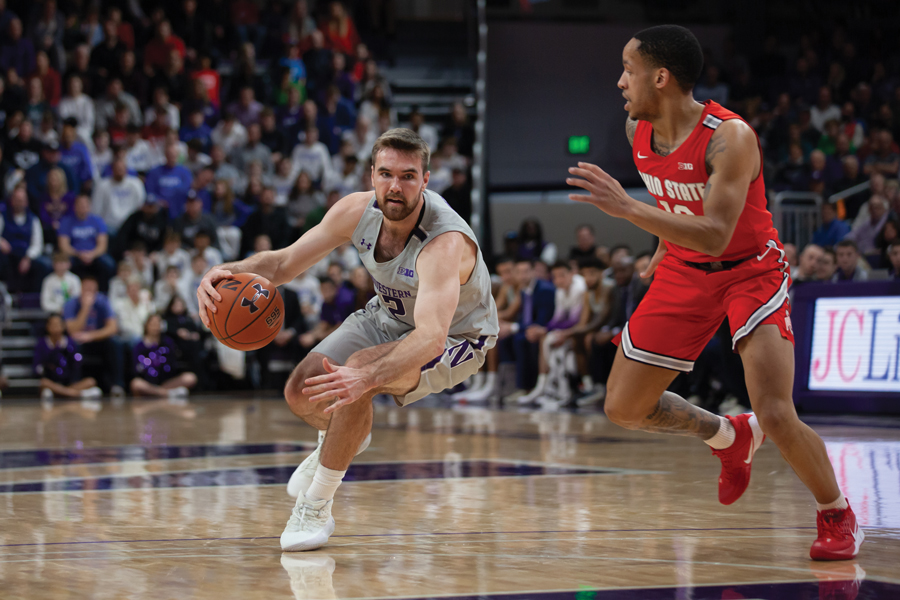 Pat Spencer attacks the basket. The grad transfer guard is expected to start against Ohio State.

Northwestern almost shocked the world when it played No. 14 Michigan State close on Dec. 18.

The Wildcats (6-13, 1-8 Big Ten) couldn’t pull it off, but it felt like a sign of better things to come. Going into their second matchup with the Spartans (15-5, 6-2), NU is in almost the exact same place — still a team just on the verge of breaking through.

“When you play Michigan State, you talk about transition points, and you talk about offensive rebounds,” said coach Chris Collins after the game against the Spartans on Dec. 18. “Those are the two things they’ve done notoriously for many many years.”

Michigan State is tied for the best conference record in the Big Ten and is 9-1 at the Breslin Center. The Cats are 1-5 on the road this season, and have struggled in conference play, with only one Big Ten win that came at home against Nebraska on Jan. 11.

In order for NU to upset the Spartans, it will likely need a strong offensive performance from freshman guard Boo Buie, who made big strides in his second game after returning from injury against Ohio State on Jan. 26. Buie scored 10 points, but struggled with his accuracy and shot only 25 percent from the field.

Buie’s highest-scoring performance of the season came against Michigan State on Dec. 18. He came off the bench to score 26 points, which helped the team rally back from a 16-point deficit to keep the game competitive.

“I was just taking the open shots, and playing aggressive,” Buie said after the game against the Spartans. “Whether who’s in front of me, I’m going to do the same thing that I do.”

Buie’s return to prominence on offense will take some of the load off of the Cats’ leading scorer, sophomore forward Miller Kopp. Kopp scored 15 points in the first half of Sunday’s contest against Ohio State, but in the second half, the Buckeyes increased their defensive pressure on him, and he was only able to add five more.

Buie’s return from injury has also helped to spread the floor, since NU played with a four forward lineup without him, with grad transfer guard Pat Spencer as the only guard on the floor. In the past two games, Buie has not shown signs of injury, and was able to rally and continue to play after a hard fall Sunday against Ohio State with no issue.

“I feel like I’m coming back fine,” Buie said. “I’m just trying to come back and play the right way, make the right play and help my team win.”