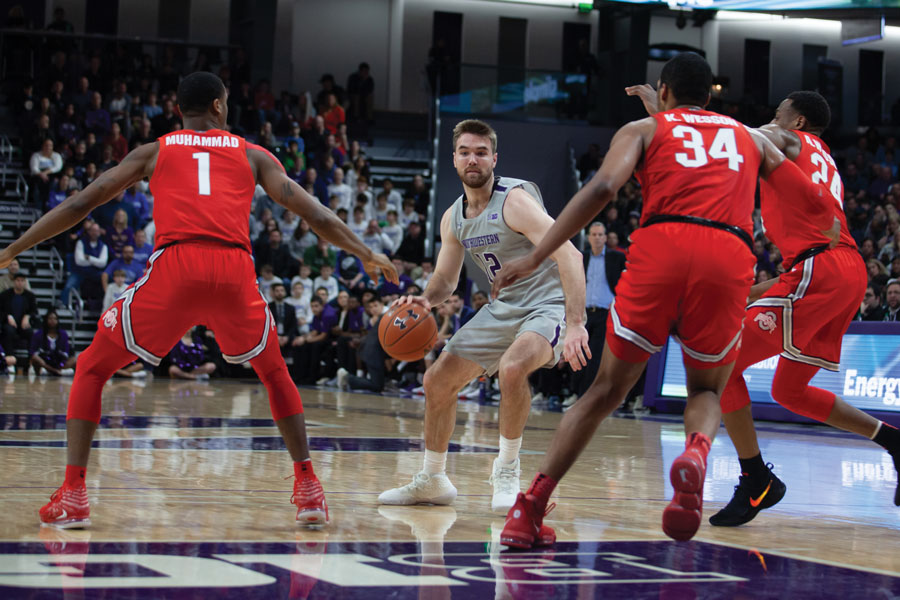 Pat Spencer dribbles by defenders. The graduate transfer guard was the only player to score in double digits on Wednesday.

Sophomore forwards Miller Kopp and Pete Nance have seen a lot at Northwestern over the last two seasons. They’ve been thrown into big roles early in their careers, played in dozens of close games and dealt with the pressure of being last place in the Big Ten for back-to-back years.

But even they have never lost a college game by as many points as they did Wednesday night.

The Wildcats have been the worst team in the Big Ten since their season-opening loss to Merrimack, and Wednesday’s game against Michigan State was yet another low point. NU (6-14, 1-9) lost 79-50 at No. 14 Michigan State (16-5, 8-2), its biggest loss of the last two seasons.

“Sometimes you forget where they’re at in their careers and you want them to be ahead of schedule,” Collins said. “Sometimes you run into teams like (Michigan State) who are really good and old and tough, and they let you know where you need to go.”

The Cats trailed 16-2 early and made just one field goal in the opening seven minutes. But grad transfer guard Pat Spencer led NU back into the game in the middle of the first half, turning the 14-point deficit into a 3-point deficit. Spencer finished the first half with 7 points, but the Cats couldn’t respond after the Spartans started sending more defenders at Spencer.

Michigan State’s lead grew to 11 points by halftime, and then NU opened the second half with one of its worst scoring stretches of the season. It took the Cats nine minutes to score 4 points in the second half, and for most of the game NU was on pace to set a season record for fewest points in a game.

“We tried to fight back,” Collins said. “They closed the half strong with a couple threes. And then in the second half, they outplayed us in every way.”

The Cats shot just 31 percent from the field Wednesday and finished the game with 15 turnovers. Spencer scored a team-high 11 points, but he was the only NU player in double digits. Kopp and freshman guard Boo Buie –– the Cats’ best scorers during conference play –– combined for just 12 points on 17 shots, and Kopp was held to fewer than 10 points for the first time in January.

While the Cats’ offense struggled, the Spartans had one of their best scoring halves of the season. Big Ten Player of the Year contender Cassius Winston had a game-high 18 points for the Spartans, and center Xavier Tillman, a projected first round NBA Draft pick, had 12.

NU hadn’t lost by more than 14 points in a game all season, but the Spartans led by as many as 36 points on Wednesday. The Cats had their biggest Big Ten loss since 2016 and are on pace for their worst record in conference play since 2008. For the first time since 2000, NU will begin February with fewer than seven wins on the season.

“More often than not, we’ve been very competitive this year,” Collins said, “I’ve been very pleased with how we’ve played. Our results haven’t shown, but I felt like we were making progress. Then tonight we got hammered.”