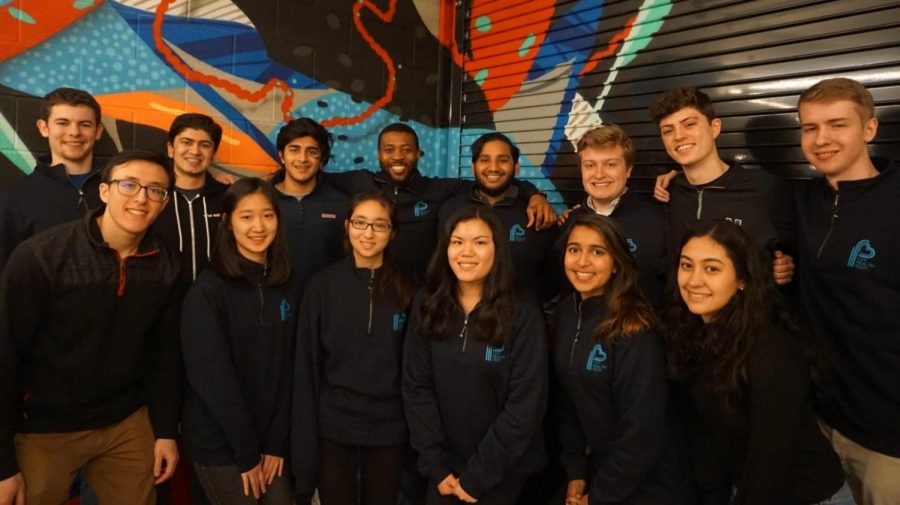 City Health Tech’s award-winning product is only 3.5 inches tall, but it is mighty.

The colorful 3D-printed monitor straps onto a faucet to count and collect data on hand-washing time. Its screen also plays engaging visuals to encourage hand-washing for the recommended minimum 20 seconds.

“You think about a sink,” Alinur said. “How do you detect hand-washing behavior? That’s something we found was crazy.”

After growing up in rural Florida, Alinur said he enjoyed the efficiency and community unique to cities. He said he also observed people were getting constantly sick due to living in close proximity. When he formed City Health Tech in The Garage back in 2017, he knew the key to improving city-centered public health was a device that monitors and encourages healthy hand-washing time.

Hand hygiene is the best way to prevent serious infections in healthcare, but healthcare providers on average wash their hands for less than half the recommended time, according to the Centers for Disease Control and Prevention. In 2015, about 687,000 patients suffered from an infection they got while receiving health care.

The modern technology to reduce healthcare-associated infections was hospitals hiring staff to sit in bathrooms with a stopwatch to time healthcare professionals’ hand-washing times, Alinur said.

Beyond hospitals, the City Health Tech team found a niche in elementary schools.

Alinur said many public schools are designated funding according to attendance rates, and individual absences can deduct from overall funding at about $6.5 billion nationally. Schools had a vested interest in encouraging their students to stay healthy and receive consistent education, he said.

The startup is currently running programs in Illinois schools and is partnered with North Shore Country Day School, Academy for Global Citizenship and the Hemenway United Methodist Church’s preschool program, among others.

Despite the product’s success, Alinur said the startup is not in the business of putting financial burdens on low-income schools. Design engineer and McCormick senior Katherine Riedel said when she entered the diverse team of business strategists and engineers, the startup’s mission emphasized that it prioritized public health improvement above all.

“We don’t want it to be another one of those devices that only helps people get rich,” Reidel said. “We do want to help people first.”

Because of its simple but effective creation, the hand-washing device and the startup have won six awards and grants in the last year alone. This includes Improve NU and Wildfire’s Demo Day. Some of the prize money went to provide low-income schools with free products and services, Alinur said.

The device currently costs $50 to install and an additional $5 monthly fee to maintain. This includes managing the devices, wireless analytics and updating animations, Alinur said.

But there’s a method to focusing on the installation of the hand-washing device in schools. Alinur said teaching humans how to properly wash hands at a younger age is logically more effective to create public health impact long term.

Irewole Akande, City Health Tech’s engineering manager, said he was excited that the startup was starting to gather the first data on actual hand-washing practices. The “baseline” of this data, Akande said, will enable scientists to conduct more quality research on the impact of hand-washing on public health.

We’re trying to call it actionable data to serve as the basis,” Akande said. “The next generation of youth aren’t going to (need to) be taught how to actually have proper hand-washing hygiene.”