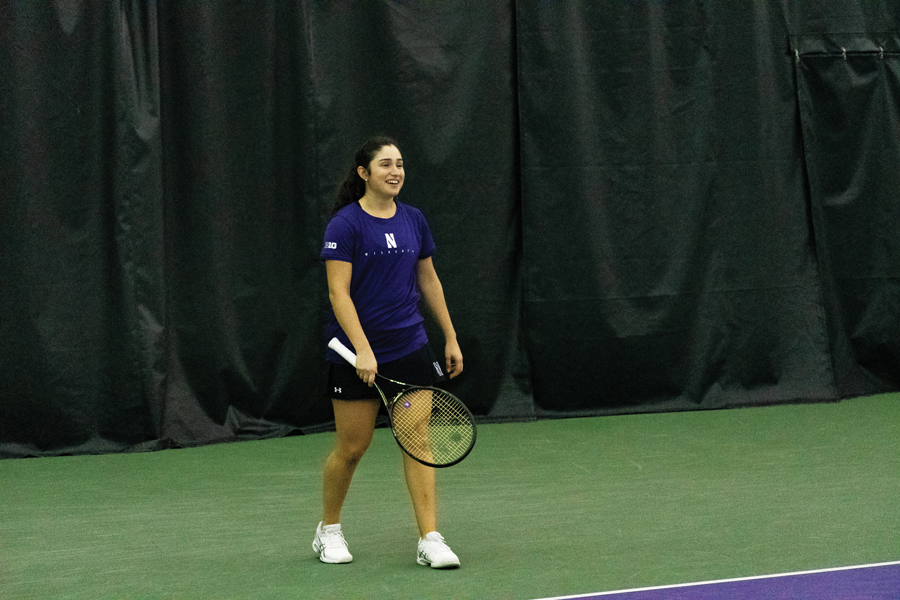 Inci Ogut smiles during a match. The junior beat her singles opponent in two sets on Saturday.

This weekend, Northwestern women’s tennis split their matches at the ITA Kickoff in Nashville, Tennessee, falling to Arizona State (2-4) before beating Penn in a clean sweep (4-0).

Despite losing as a team to the Sun Devils, the Cats picked up two singles wins against them on Friday. Senior Julie Byrne defeated Ilze Hattingh (2-6, 6-4, 6-4) at first singles, while freshman Briana Crowley beat Cali Jankowski (6-7, 7-6, 6-1) at fifth singles.

Both the senior and the freshman battled back to win in three sets after losing their first sets.
However, NU also fell 1-2 in doubles against Arizona State, winning only the third doubles spot thanks to freshman Christina Hand and junior Inci Ogut who beat their opponents (6-2).

After a tough outing on Friday, the Cats bounced back on Saturday against Penn, gaining the first team win of the 2020 season. Crowley, Ogut and sophomore Clarissa Hand defeated their singles opponents by large margins of (6-1, 6-1), (6-4, 6-1) and (6-1, 6-2) respectively. NU also outperformed the Quakers in doubles, winning two matches to close the day.

Coach Claire Pollard said the Sun Devils’ experience gave Arizona State the upper-hand due to its strong roster of seniors and juniors in comparison to the Cats’ younger pool of players. However, she predicts that throughout the season, NU will become more comfortable on the court.

Hand, who missed the entire fall 2019 season due to injury, said she already sees improvement in her play since last weekend’s Miami Invite.

“All things considered I’m playing pretty well, and I just need to hit more balls,” Hand said. “Having the whole team behind you and competing for them helps so much.”

The Cats’ upward momentum comes at an effective time considering the team has its first home matches against tough competitors next weekend. NU will face Vanderbilt, who already defeated the Cats once this season on Friday.

“Our lineup is ever evolving. There will be some matchups that were the same, and there will be different ones,” Pollard said. “We are going to work harder on Tuesday, Wednesday, Thursday. Our goal will be to go out and make Vanderbilt adjust to us rather than us adjusting to them.”