Letter to the Editor: Kessel misses the mark on anti-Semitism 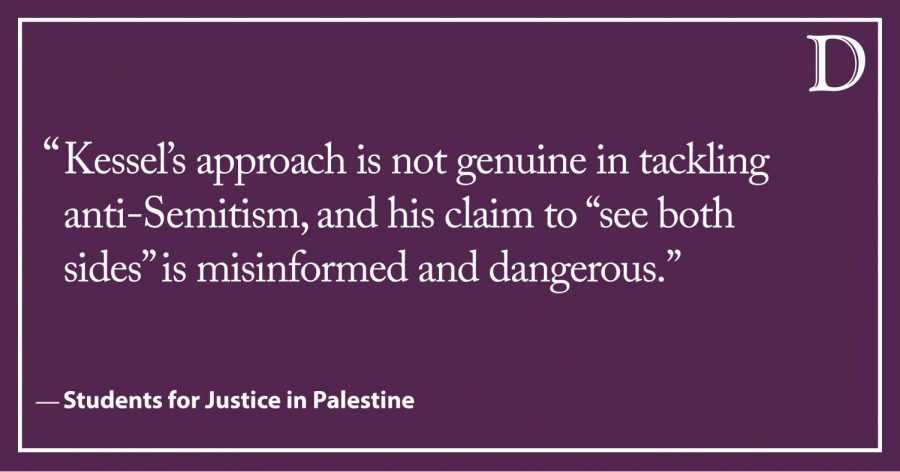 It is clear that anti-Semitism is on the rise in the West. However, while it is imperative to condemn and combat the insidieousness of anti-Semitism, we must not in turn scapegoat other marginalized groups for anti-Semitic tragedies.

Columnist Zach Kessel’s recent op-ed, “Anti-Semitism is a problem, not a political tool,” does exactly that. Filled with incongruencies and at times blatant lies, the Islamophobia and anti-Semitism within his own piece are harmful to not only the Jewish community, but black and Muslim communities as well. Kessel’s approach is not genuine in tackling anti-Semitism, and his claim to “see both sides” is misinformed and dangerous. We believe it necessary to push back against the fallacies that go unchecked in his piece.

Kessel opens his piece citing a deleted tweet of US Representative Rashida Tlaib’s (D-Mich.), writing that “Tlaib deleted her tweet and did not offer any further condolences,” after learning that an anti-Semitic shooting had not been perpetrated by white people. In this, Tlaib was initially offering a necessary critique of whiteness. By mischaracterizing Tlaib’s response, Kessel ignores the reality that white supremacy is intimately tied to anti-Semitism regardless of the race of the perpetrators.

Instead of locating anti-Semitism within a larger logic of white supremacy, Kessel villifies Representative Tlaib, a non-Jewish person of color who is clearly seeking to forge meaningful alliances with the Jewish community. Further, Kessel’s focus on Tlaib and Omar throughout the piece is uncomfortably Islamophobic and reflects mainstream, white supremacist discourse which attempts to attack Black and Brown Muslim women. In his insincere efforts to critique both the left and right, Kessel misses the mark: white supremacy informs anti-Semitism in America.

Kessel further argues that anti-Semitism exists on the left, yet only references criticisms of Israel. Being critical of violence enacted by a military regime is not an attack on Judaism. Kessel continually conflates anti-Zionism and anti-Semitism — a conflation which is itself anti-Semitic, as it predicates the Jewish faith on support for the Zionist project. His piece plays a part in the larger Zionist project to distort definitions of anti-Semitism to shield Israel from any form of critique. We must be stringent in what we consider anti-Semitic. When one considers anti-Zionist thought to be anti-Semitic, one disingenously uses and manipulates Jewish suffering to erase Palestinian suffering at the hands of Israel.

It is not an attack on Judaism to acknowledge Israel’s violent occupation of Palestine. It is not an attack on Judaism to condemn the 600-plus military checkpoints in the West Bank. The 43 years of occupation of Gaza. The horrifying torture of women. The withholding of water and food. The destruction of homes.
We must denounce Zionism as a settler colonial project steeped in white supremacist ideology, and we cannot tolerate Israel’s refusal to discuss Palestinians’ right to return. It is self-defeating to center the discourse on what can or cannot be said about Israel, rather than on the gross violation of human rights.

— Students for Justice in Palestine