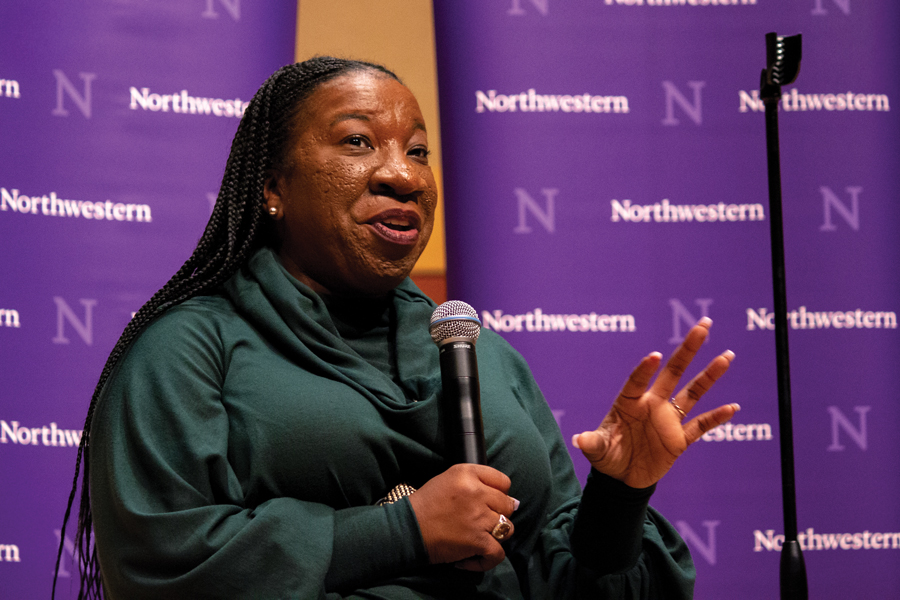 Activist Tarana Burke delivers a keynote address on community healing from sexual abuse in marginalized communities. Burke has been organizing for years and is the founder of the #MeToo movement

Before #MeToo became a rallying cry for the global movement against sexual misconduct, Tarana Burke had been organizing communities of color for years to address sexual violence.

At Pick-Staiger Concert Hall, the civil rights activist behind #MeToo received two standing ovations Monday for her keynote address on collective progress. Burke came to Northwestern as a part of the Martin Luther King Jr. events scheduled for Dream Week 2020, a series of programs that celebrate black history on the Evanston and Chicago campuses. Other events have included Alpha Phi Alpha’s candlelight vigil and Eva Jefferson Day.

In her speech, Burke said the movement was about healing — both individual and institutional — from a ubiquitous trauma. In doing so, Burke emphasized, people need to support marginalized communities.

After a musical preface and spoken word performance, Soteria Reid, a SESP junior and ASG’s executive officer of justice and inclusion, introduced Burke.

“Her powerful story as a creator of what is now an international movement that supports survivors is one of love, community, accountability and commitment to a cause,” Reid said.

In October 2017, the first #MeToo tweet garnered hundreds of thousands of retweets, likes and comments, Burke said, and the same post got 12 million posts, comments and reactions on Facebook within 24 hours. Within a year, the hashtag was used 19 million times on Twitter, making it “one of the most prolific hashtags on the history of the site,” she said.

Burke emphasized that the movement was not built by a hashtag, but rather a result of persistent community organizing. She began herself in 2006, when she developed the nonprofit Just Be Inc. after working with survivors of sexual abuse in Alabama, then used the phrase “me too” for the first time on Myspace. Even though she is a central figure in the movement, Burke said it was a collaboration between many communities that recognized a need.

“This thing is too big to think that one person can do it, there is no silver bullet,” Burke said. “There’s no one person, there’s no one idea, no one mission.”

Weinberg junior Kourtni McNeil, who performed slam poetry at the event, said she focused her performance around forming communities to support survivors.

McNeil said the experience of sexual misconduct is common on college campuses and fostering both casual conversations and institutional dialogues is important.

“As people, we are a community and we should be banding together — it’s sad when we don’t do that,” McNeil said. “Just being a part of the event was really beautiful to me.”

Burke also spoke about the calls she had to make as an organizer, engaging strangers in conversations about race, sexuality and sexual abuse in different communities. Burke contrasted the silence around sexual misconduct to the organizing and calls for action on gun violence.

In contrast to gun violence, Burke said, many communities tend to stay silent around instances of sexual violence. This trend tends to become exacerbated in places in which police presence may spark fears of deportation or brutality, she said. Still, turning the tide against the norm of silence is necessary.