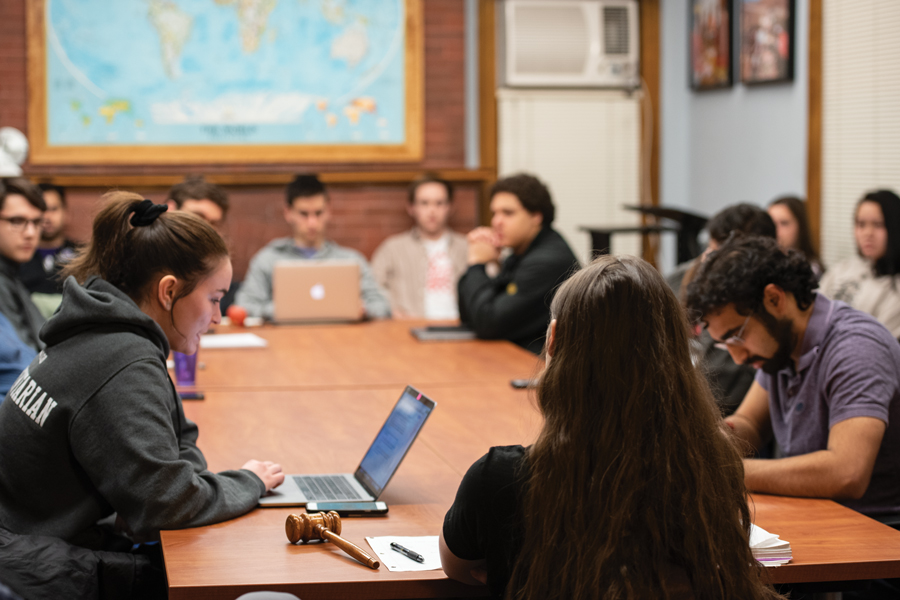 Political Union met Monday to discuss whether or not news organizations should endorse political candidates. The majority of participants voted that it’s okay for newspapers to make endorsements.

Northwestern Political Union voted that it is acceptable for news outlets to endorse political candidates at their weekly meeting on Monday.

The discussions delved into newspapers’ roles in political races and the effect endorsements have on outcomes. The topic was motivated by The New York Times’ recent endorsement of democratic candidates Elizabeth Warren and Amy Klobuchar.

During the debate, Weinberg sophomore Elizabeth Sperti backed the opinion that newspapers should not make endorsements because publications are institutions. She discussed believing it is dangerous for institutions to use their power to influence individual political decisions.

“Either (newspapers) influence opinion and people are taking the stance of a biased source into consideration or everyone ignores their endorsement and the endorsement was just a self indulgent waste of time,” Sperti said.

Sperti argued that too much power is handed over to major publications like The New York Times. She also said she views news organizations hosting and asking questions at debates is another example of the inappropriate extent of power the media holds in politics.

Bienen junior and Political Union events coordinator Sachin Shukla was on the other side of the discussion, believing that it’s alright for newspapers to make endorsements in order to inform the public. Sachin said newspapers can be a reliable source of information for people who don’t have the time or resources to research candidates on their own.

“People who work on editorial boards are not only relatively informed on politics, they live and breathe it,” Shukla said.

Sperti argued that everyone should pick up the burden of informing themselves about their own political decisions and should not rely on the opinions of others.

But Weinberg sophomore Will Paschke said it is naive to think that everyone has the time or political savvy to independently create their own opinions.

“So our question today is whether or not newspapers should be allowed to endorse candidates? And I think the answer is yes,” Paschke said. “I agree that there’s bias there, of course, but the fact of the matter is every single person’s opinion about anything is bias. That is the nature of having an opinion is biased.”

Sperti expressed concern that The New York Times endorsement alienates voters and provides them with an opportunity to trust the media less than they already do.

Shukla made the counterargument that endorsements often resist the candidates who stand furthest on either side of party lines, citing the paper’s decision to not back either President Donald Trump in 2016 or Democratic candidate Bernie Sanders.

The final vote broke down with 13 people supporting news outlets exercising their right to endorse political candidates, while seven attendees voted it should be unacceptable.