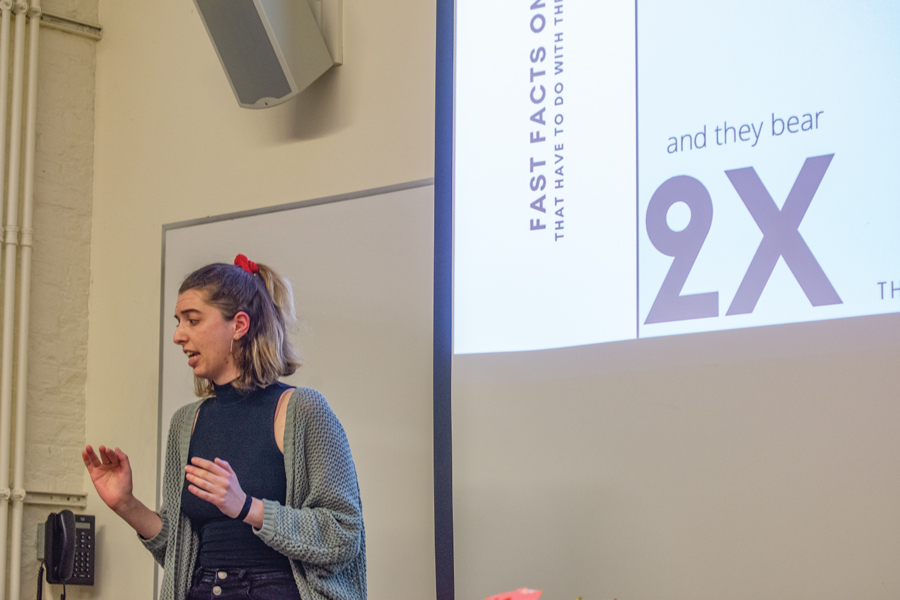 The event facilitated discussion on the proposed reforms, economic justice and ways attendees could support the Fair Tax 2020 Campaign. Gov. J.B. Pritzker signed a bill last June amending Illinois’ Constitution to include a progressive income tax wherein higher earners pay a higher rate. The amendment will go into effect if a simple majority of voters, including those who skip the question, approve it or at least 60 percent of those who vote on it approve it come Election Day this fall.

Currently, Illinois has a flat income tax rate of 4.95 percent. The proposed changes would create a system of tax brackets. Most significantly, additional income past $250,000 would be taxed 7.75 percent.

SESP sophomore Marissa Levy and SESP senior Bevy Daniel, JCUA local fellows, referred to this policy as a “fair tax” during their presentation.

“The lowest 20 percent of earners in Illinois are bearing two times the tax burden of the top one percent, which is completely unfair and unreasonable,” Levy said.

The campaign argues a uniform rate begins to appear asymmetric when contextualized by the number of people who continue to be systemically and institutionally discriminated against and, as a result, have less money.

Levy and Daniel said Illinois’ budget issues persist despite the current tax scheme, citing the pensions crisis and cuts to health-related services. They said the changes would only result in higher taxes for three percent of Illinois taxpayers while simultaneously increasing revenues by $3.5 billion in its first year.

“But those three percent of people are the highest income earners who potentially have a really huge stake in not seeing fair tax passed,” Daniel said.

The teach-in included a number of small group discussions with the roughly 20 attendees. SESP sophomore Matthew Albert’s group discussed how tax policy itself connects to numerous other policy areas. Coming from New York, one of the 41 states without a flat income tax, Albert said he was fascinated by the current situation in Illinois.

Weinberg senior Lucy Yang, a Kentucky native, said she came to the event uninformed about Illinois’ tax policy. She said her group’s conversation provided insight on what they could do to push for state ballot initiatives such as tax reform.

“Even though I’m not from Illinois, there’s an impact I could make,” Yang said.

Levy and Daniel touched upon this themselves when explaining why JCUA wanted to present the Fair Tax 2020 Campaign to Northwestern’s students. The towns near Northwestern, they said, are likely to have residents who will see tax increases under the tax amendment — a challenging but rewarding demographic to win over. JCUA also has older members working on the campaign, but Daniel said it’s exciting to bring the energy and perspective of a younger group into the movement.

“Northwestern is in the perfect spot to shoot out canvassers to go and talk and educate and get involved with that sector of the electorate,” Daniel said.