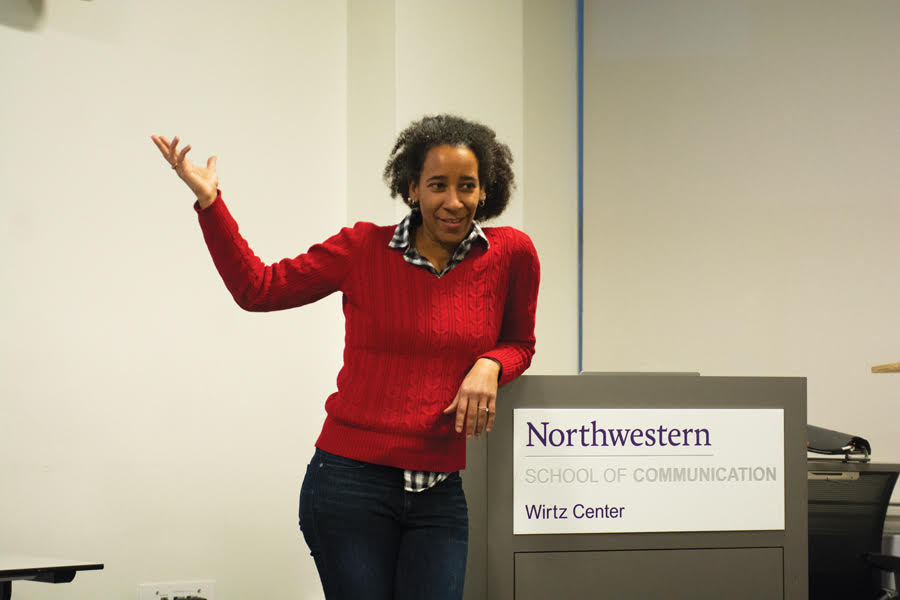 Diana Adesola Mafe. The English professor discussed her research on black women in speculative fiction at an event on Monday.

As a child in the 80s, Diana Adesola Mafe was a fan of sci-fi movies, from “Robocop” to “The Terminator.” But when she grew up and started looking at the media of her childhood with a more critical lens, it became harder for her to ignore the representation of black women like her in the movies she loved.

“As much as I loved ‘Back to the Future,’ and I could probably quote that whole movie to you from memory, where did I see myself in that movie?” Mafe said at a speaker event on Monday. “I didn’t.”

An English professor at Denison University, Mafe spoke at Virginia Wadsworth Wirtz Center for the Performing Arts on Monday about her research into the complicated history of black women in American and British speculative fiction. Her research is collected in her latest book, 2018’s “Where No Black Women Has Gone Before: Subversive Portrayals in Speculative Film and TV,” which examines six case studies of black women in 21st-century speculative media.

The event was organized by the Black Arts Initiative, an interdisciplinary faculty group that focuses on programming related to black art, which encompasses a wide variety of mediums and genres.

“We focus on people whose research interests focus on black art, but black art capaciously, so visual art, performance art, film and media, so on and so forth,” Rikki Byrd, Weinberg doctoral student and a graduate student representative for the Initiative, told the Daily. “It has a really big focus on interdisciplinary thinking.”

Mafe discussed how black women in film and television have often been pigeonholed into stereotypical and simplistic roles in mainstream fiction, from the “mammy” archetype encapsulated by “Gone With The Wind” to the tragic mulatto portrayal of mixed-raced characters. However, in the mid-20th century, speculative film and TV emerged as a genre containing significant portrayals of black women in progressive and non-stereotypical contexts.

Mafe pinpointed the original Star Trek series from 1966 as the beginning of this trend. The series portrayed Lieutenant Uhura, Nichelle Nichols, as an equal to the rest of her crew members, and the character was widely regarded as groundbreaking. Famously, when Nichols considered leaving the show after the first season, Martin Luther King Jr. persuaded her to stay on, telling her that she was an important role model for black children. In the third season, the series featured one of network television’s first interracial kisses, between Uhura and Captain James T. Kirk.

Mafe said after Uhura, it became common to see black women as supporting characters in speculative fiction, from “Mad Max Beyond Thunderdome” to “Conan the Barbarian.” In her research, she decided to look at how portrayals of black women in speculative fiction have evolved in the 21st century, and focused on six American and British films and television shows with significant black female characters: “Aliens vs. Predator,” “28 Days Later,” “Firefly,” “Doctor Who,” “Children of Men” and “Beasts of the Southern Wild.”

In her analysis, Mafe found that many of these characters held a level of agency uncommon to black women in film. For example, “28 Days Later” features Naomie Harris as Selena, who is depicted as significantly more capable and action-focused than the white male lead. She also said, although some of the characters, like Kee, Clare-Hope Ashitey, in “Children of Men,” have traits that could be considered stereotypical, the actors’ portrayals imbue the characters with significant agency.

Mafe said her interpretations of the films often center the black female in a way that is probably not intended by the director, but makes the films far more interesting.

“It’s always interesting to think about agency in popular culture,” post-doctoral fellow Bimbola Akinbola told the Daily. “And what’s possible outside what the director intended.”

Mafe noted that when these works are looked at together, a significant lack of progress in black women’s roles in speculative fiction becomes apparent. Although some of the characters she examined in her research are well fleshed out, most are secondary characters and sidekicks who support a white male protagonist, and black women are often not afforded the ability to be their own heroes in speculative fiction.

Mafe also said the 2009 reboot film of Star Trek featured Uhura, played by Zoe Saldana, in a role that retained many of the problems of the original series — depicting her as sexualized and submissive — without evolving the portrayal in a significant way.

Mafe said after her book was published, two notable works were released. The first, “Star Trek: Discovery,” featured Michael Burnham, Sonequa Martin-Green, as the lead of the series, finally centering the franchise on a black female voice. The second was “Black Panther,” which was a watershed moment for black representation in mainstream blockbusters and featured prominent black women playing significant and diverse roles in the story.

However, Mafe said although she liked “Black Panther” and felt that the female characters were well-written, she was frustrated that the story still revolves around the conflict between T’Challa, Chadwick Boseman, and Killmonger, Michael B. Jordan, and no matter how she looks at it, the women of Wakanda are still secondary.

“I’m waiting for a movie that does what ‘Black Panther’ does, with a woman,” Mafe said. “That would be amazing. And I don’t know why that needs to be so hard.”