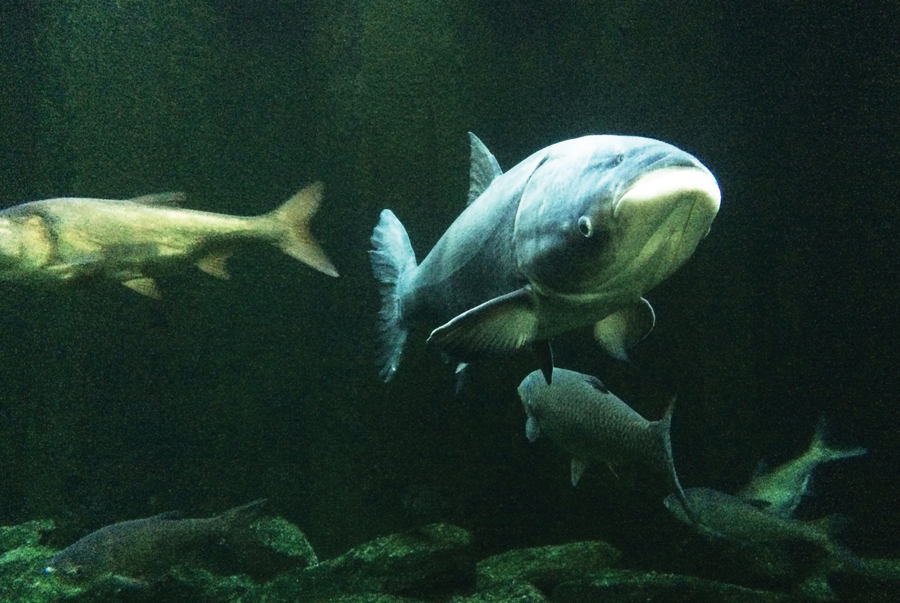 The Big River Fish headquarters in Pearl, Illinois buys the carp from local fishermen and then processes, sells and ships the Asian carp to China. Asian carp have been spotted about nine miles from Lake Michigan.

Various invasive Asian carp species lie as close as nine miles of the Great Lakes, according to the Alliance for the Great Lakes. Experts have now begun the last-defense fight against the fish, from installing electric barriers to calling for congressional action.

The species, which compete with native species for food and habitat, were imported to the United States in the 1970s as a means of controlling algal blooms in wastewater treatment plants, according to the U.S. Geological Survey. Within ten years, however, the carp had escaped and eventually spread to the Mississippi Basin and rivers like the Illinois.

If carp were to reach the Great Lakes, the results, though unpredictable, would likely be damaging. The carp could disrupt the region’s $7-billion fishing industry, cause habitat degradation or out-compete native populations for food and resources.

In May 2019, the U.S. Army Corps of Engineers sent a $778 million plan to Congress asking for funds to add noisemakers, electric cables and other devices to the Brandon Road Lock and Dam near Joliet, Illinois, according to WTTW. The lock and dam serve as a pathway between the Illinois River and Lake Michigan.

Joseph Parkos III, a field station director for the Illinois Natural History Survey, and Steven Butler, a fisheries ecologist for INHS, are just two scientists looking at removing carp from the area.

Some methods of carp removal that Butler and Parkos have looked into include catching the fish with nets or traps and using electric barriers designed to make the fish feel uncomfortable and reverse movement toward the Great Lakes.

Butler added that scientists monitor the infested bodies of water to identify and disrupt the species’ reproductive cycles.

“We want to know where the hot spots of reproduction are, so we could potentially go in and remove fish from those areas,” Butler said.

Carp have high reproductive rates, which can further disrupt the ecosystems they infest and overwhelm native species.

While officials and scientists are exploring more innovative ways to push back the carp, Butler and Parkos mentioned several ways residents could help keep the Great Lakes carp-free. Butler emphasized avoiding moving the species around to new waterways and, since the fish are edible, beginning to eat carp as a means of increasing its market value and encouraging fishers to hunt for and remove the species.

Butler and Parkos both agreed that using baby carp as live bait poses a dangerous threat to containment.

“You never want to release live bait into waters they’re not from, period,” Parkos said, referencing the movement of bait that resulted in some carp being introduced into the Chicago area. “It’s always really risky to be moving fish around.”

Some experts are also pursuing non-technical solutions to the problem. Robert Hirschfeld, the water policy specialist for the Prairie Rivers Network, currently leads the organization’s Stop Asian Carp campaign. One goal of the campaign is to educate people about the impact of carp on both the Great Lakes ecology and economies.

Hirschfeld also mentioned that the carp problem is a two-way issue, not solely defined by carp entering Lake Michigan, but also by the havoc wreaked on the river systems already infested with various carp species.

He hopes to see a holistic approach to how all of the waterways interact, which might even mean going beyond the carp issue to incorporate cleaner water goals or even tackling the issue of other invasive species.

“There are some losses when you define the problem so narrowly that it becomes about a couple of species of fish,” Hirschfeld said. “The problem is much larger. It’s about how we treat our wastewater, it’s about how we manage rivers largely for the benefit of commercial navigation and how we let some communities and some areas be sacrifice zones for others.”