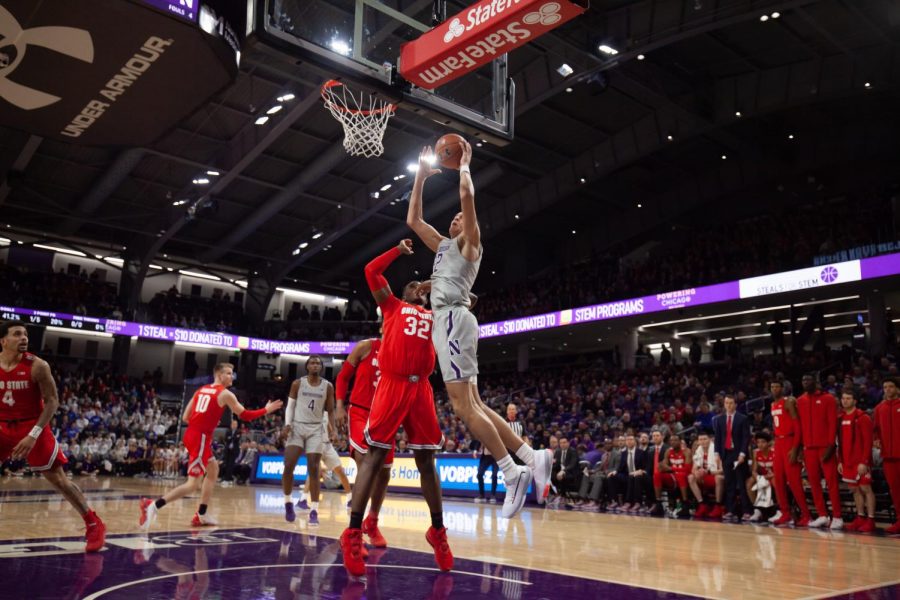 (Joshua Hoffman/ The Daily Northwestern). Pete Nance shoots a layup. Northwestern's offense struggled from the field in a loss to Ohio State.

When grad transfer guard Pat Spencer was standing on the left sideline, Northwestern had a one point lead with around 14 minutes left in the game. It took ten nearly flawless minutes for the Wildcats to even be in this position, turning a 10-point deficit into a narrow lead early in the second half.

And then Spencer inbounded the ball.

For the second consecutive game, the Cats kept making mistakes in the second half to let a Big Ten game get away from them. This time, NU (6-13, 1-8) lost 71-59 to Ohio State (13-7, 3-6) and missed a chance to get out of the basement in the conference standings.

The Cats finished the game with 13 turnovers, but they had even bigger issues on the defensive side of the ball. NU led by three points early in the second half, but the Buckeyes made five open field goals over the next four minutes to take the lead back. Ohio State made 11 threes in the game, and NU’s zone struggled to take away those shots.

It took an impressive run at the end of the first half for the Cats to have a chance in the second. NU trailed by double digits early on, but sophomore forward Miller Kopp made three field goals in the last four minutes of the first half so Ohio State led 38-35 at halftime.

NU’s offense couldn’t find that same rhythm in the second half, but the Cats hung around until the last few minutes. They trailed by four points with five minutes left but allowed two more open threes to seal the loss.

1. Miller Kopp kept NU in the game in the first half

At one point late in the first half, NU had made just one field goal over the previous four minutes and watched its lead turn into a double digit deficit. And then Kopp woke up and started carrying NU. He made three field goals in the last four minutes of the first half to cut the Cats’ deficit from 10 points to 3 points at halftime. Kopp finished the first half with 15 points on 60 percent shooting, and NU’s next best scorer at halftime had just 6 points.

Kopp couldn’t continue that production after halftime and finished the game with 20 points. Grad transfer guard Pat Spencer scored 13 points, and Buie added 10 off the bench.

Turner represented NU at Big Ten Media Day, which appeared to be a sign that the senior forward would be a key player for his senior season. But Turner surprisingly came off the bench the first game of the year and has been the Cats’ sixth or seventh man all season. Even after the injury bug hit the team, freshman forward Robbie Beran started over Turner.

Collins shook up the lineup Sunday for the first time in conference play. Turner opened the game alongside Pete Nance and Ryan Young in the frontcourt. But Turner had one of his lowest scoring games of the season. He finished with just 2 points on one shot and couldn’t spark a struggling offense.

3. The Buckeyes really needed a win

In December, Ohio State was ranked No. 2 in the country and a win away from taking the top spot. One month later, the Buckeyes entered Welsh-Ryan Arena unranked and second-to-last in the conference standings. Their only win this January was at home against Nebraska.

Ohio State remains in the NCAA Tournament picture because of its strong start to the season, but a loss to NU would have put that berth in further jeopardy. Instead, the Buckeyes won and held their ground on the tournament bubble.