Fairy Doors of Evanston brings magic to the city 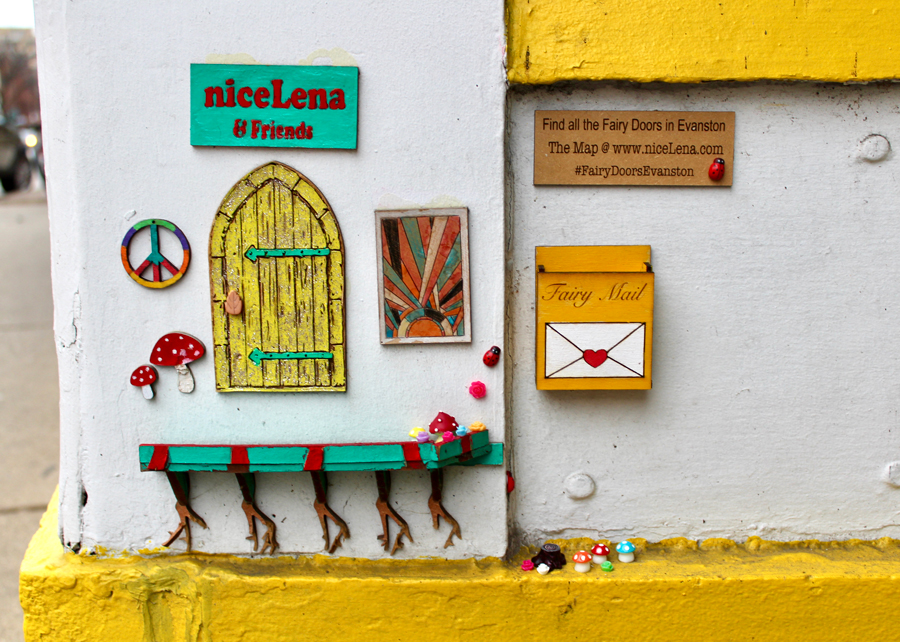 Lena Kim displayed a fairy door outside niceLena & Friends shortly after the store opened. She makes the fairy doors using a laser cutter and wood.

Lena Kim, owner of niceLena & Friends, aims to bring magic to the city through Fairy Doors of Evanston, a program she recently founded. Using a laser cutter, Kim makes wooden fairy doors for businesses to display outside their storefronts. Kim said Fairy Doors of Evanston is a way to make children feel included in the community.

“I really want our neighborhood to have a playful atmosphere,” Kim said. “The fairy doors are a way to send that message.”

Kim opened niceLena & Friends on Chicago Avenue in August 2018. Shortly after, she made the first fairy door for her shop, inspired by her daughter’s love for fairies as a child. Kim saw the potential Fairy Doors of Evanston could have to become a city-wide movement. She said children are often “dragged around” on errands and she wanted to make it fun for them.

Fairy Doors of Evanston is currently concentrated within The Main-Dempster Mile, where Kim’s store is located. She posted about the program on Facebook and business owners “immediately” volunteered to join. Kim quickly met her goal of establishing 20 doors in the area.

“Business owners see the fairy doors as a pull to motivate residents to visit their stores,” Kim said. “It’s another way for shopkeepers to engage with the community.”

Kim makes seven differently shaped fairy doors, three she designed and four drawn by local middle school students. She donates the doors to businesses that want one, calling them “a gift and a challenge,” because the businesses then have to decorate the doors. Kim said most people match the door to the identity of their business. Kim also sells fairy doors at her store for customers to purchase.

In December 2019, Katherine Gotsick, executive director of The Main-Dempster Mile, planned an event with Kim centered around the fairy doors called Kids Shopping Day. Children were invited to search for the doors in town and win prizes. The event also added a new element to the program: actual fairies with names and backstories. Gotsick said this gave children something to look for inside the stores.

“Fairy Doors of Evanston activates the neighborhood for kids,” Gotsick said. “It shows kids that businesses have them in mind.”

Rachel Round, owner of Booked on Main Street, said the store “loves” its fairy door. The children’s bookstore participated in Kids Shopping Day and decided to give its fairy non-binary pronouns when writing its backstory.

Round said she wanted to add “some representation” among the fairies in the area.

“Booked is an inclusive and diverse bookstore,” Round said. “We want our fairy to reflect that.”

Fairy Doors of Evanston now has a Facebook page and a Google Map. Kim said she sent out around 40 doors to businesses thus far, although not all of them have been put on display yet. She plans to locate fairy doors in other parts of Evanston in the future, as well as develop more events around the program.

“If fairy doors help people hold on to their childishness, they’ve done their job,” Kim said. “I hope kids are inspired to play around them, whether that’s in our stores or in their own backyards.”