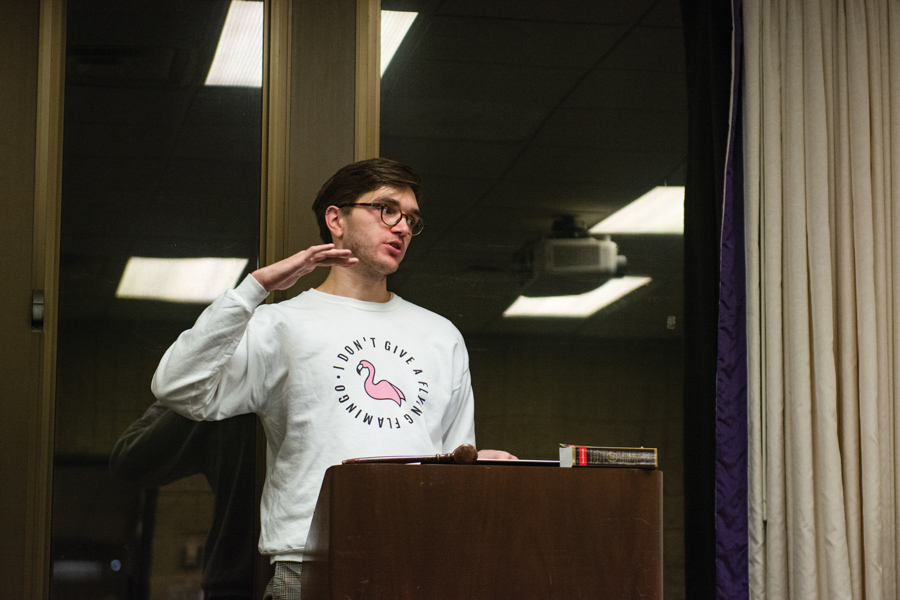 ASG speaker of the senate Matthew Wylie introduces a statement in support of lowering senate seats. It passed 20-5-1.

Matthew Wylie, speaker of the Associated Student Government Senate, introduced a statement during Wednesday’s session in favor of reducing the number of seats due to chronic low attendance by senators.

According to the Weinberg sophomore’s statement, low attendance rates have been a consistent “burden plaguing the Senate.” Cutting Senate seats would improve problems for weekly sessions, both logistical and philosophical, Wylie said.

“I just want to see a more vibrant Senate,” Wylie said. “I wouldn’t take these steps if I didn’t think it would help improve our proportional attendance.”

Weinberg sophomore Margot Bartol spoke in favor of reducing seats, saying it can have significant financial implications for the Senate’s decision-making capacity. When she was a senator last year, Bartol said, ASG had to make important decisions with relatively low input.

“We had some very important discussions with (about) 20 people here and it was very concerning that we were discussing large sums of money with not a lot of people here,” Bartol said. “So maybe we shouldn’t do that anymore.”

According to the ASG constitution, at least 26 senators must attend a session to continue conducting business. Still, ASG has had to ignore this rule to make timely decisions on the necessary matters, Wylie said.

Since ASG’s 58th Senate session in 2018, the average attendance rate was 56 percent, Wylie wrote in his statement. At its least-attended meeting, only 17 senators showed up.

Wylie’s opinion was shared by the majority of the attending Senate members at the session, who voted 20-5-1 to pass a sentiment ballot.

While this is not an official decision, the result confirms that the Senate move forward to decrease the seats. Still, ASG is considering cuts as steep as 50 percent. In the upcoming weeks, Wylie will present a written constitutional amendment with an exact number of Senate seats and methods of implementation.

ASG has considered officially cutting the number of Senate seats in the past. Last May, it reached an agreement with the Greek councils to change the proportion of representation, reducing the number of seats from 10 to four, which would have lowered its size from 51 to 45. This agreement, while supported by ASG, has yet to be adopted in the Constitution and will be discussed further upon the new draft of the legislation.

Weinberg sophomore Elizabeth Sperti, the body’s parliamentarian, said shrinking was necessary to create a better-functioning Senate. Sperti, who has been in charge of creating metrics based on weekly attendance in the past year, said she tries to be proactive about chronically-absent members.

Sperti said she noticed that attendance was high toward the end of fall quarter and the beginning of this quarter. Attendance can be dependent on individual members’ tendencies to join executive boards of other student organizations in the spring, she said. Sperti said cutting the seats would make them more competitive, which might lead to better attendance.

“Decreasing the Senate sounds reasonable to me,” Sperti said. “If there’s a problem, this is the solution to try.”