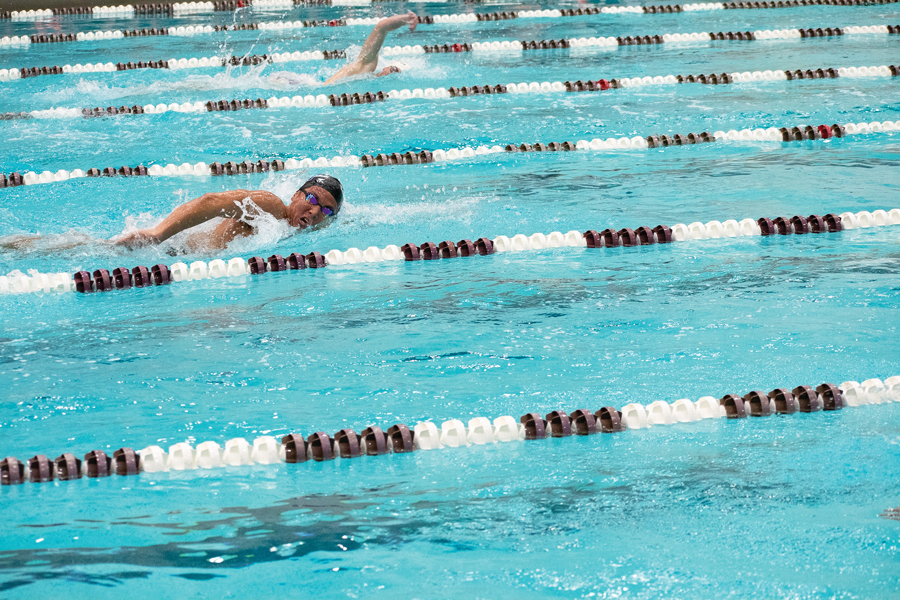 A Northwestern swimmer does the freestyle. The Wildcats had mixed results in two meets last weekend.

They may be from different parts of the globe — one from Parma, Italy and the other from Vasteras, Sweden — but freshmen Federico Burdisso and Hannah Brunzell have made themselves right at home in Evanston, Illinois.

The proof was in their weekend performances, which helped Northwestern rally from a pair of blowout losses to Notre Dame on Friday evening to stymie Iowa the next afternoon in two dominant wins. Both Burdisso and Brunzell were awarded the honor of Big Ten Freshman of the Week for their efforts.

In the Wildcats’ first Friday dual meet since a November sweep of Oakland, the Fighting Irish jumped all over both NU squads, defeating the men 151-92 and the women 169-74 — easily the worst losses of the season for both teams in dual play.

“The Notre Dame Friday night meet, that was just rough all around,” coach Jeremy Kipp said. “We were very mediocre, and they were a very good team that night.”

Despite the lopsided scores, Kipp viewed the Notre Dame meet as a valuable learning moment for both of his teams.

“(The women) were kind of embarrassed with how they did Friday night, and they did not want to end the weekend that way,” he said. “They did a good job of coming together and putting that one behind them.

“(The men), they’ve been in some really close meets and haven’t been coming out on top. I was proud of them for the way they stepped up and really competed on Saturday.”

But as tantalizing of a window into the future the Iowa meet offered, it was Senior Day for the Cats, and Class of 2020 left their fingerprints all over the afternoon’s proceedings. Nicole Aarts got NU off to a strong start in its 200-yard medley relay win, and Han won the 100-yard freestyle by 0.01 seconds before going on to anchor a 400-yard freestyle relay team that also featured senior Krystal Lara.

“(The seniors) have had a tremendous impact on me,” Kipp said, reflecting on the six departing seniors, all of whom are women. “They’ve bought into what we’re trying to do here as a staff and as a team… I’m excited for their future, and I know they’ll do great things.”