Northwestern Law Prof. Deborah Tuerkheimer speaks about the rise in informal reporting in the #MeToo movement 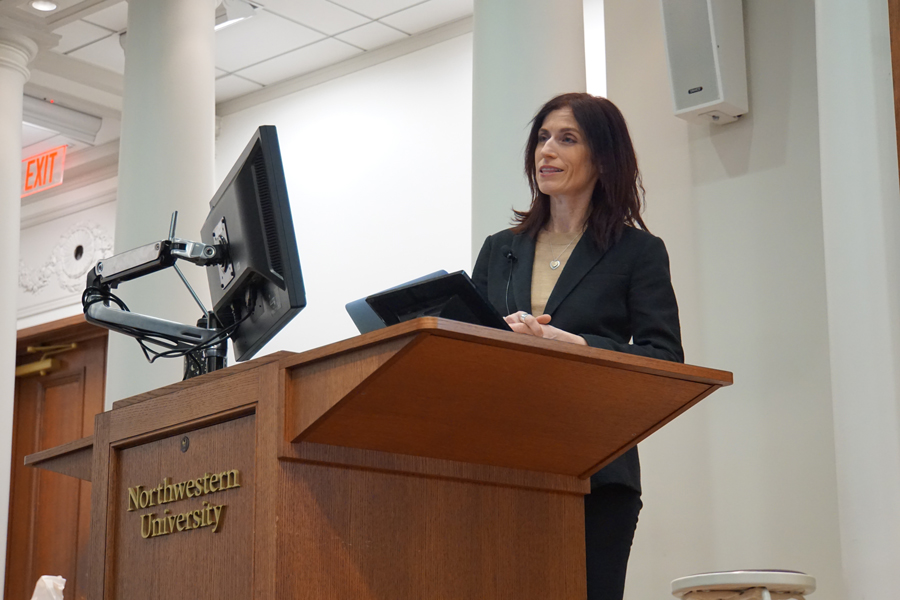 Pritzker Prof. Deborah Tuerkheimer speaks about the legal issues surrounding the #MeToo movement and why victims and survivors often resort to informal reporting.

Prof. Deborah Tuerkheimer spoke on Tuesday in Harris Hall about the rise of informal reporting in the #MeToo movement.

The Center for Awareness, Response & Education and the Women’s Center hosted the talk. During the talk, Tuerkheimer highlighted the “woeful inadequacies” of formal channels for reporting sexual assault and harassment.

“My argument is that the failings of these formal systems lead victims and survivors to turn increasingly to back channels,” Tuerkheimer said.

Tuerkheimer said formal reporting “often exacts a significant toll on survivors,” and survivors often find going to authorities “costly” and “useless.” Prosecutors would have to prove that the crimes were committed beyond a reasonable doubt — which can often be a difficult process, she said.

As a result, victims and survivors resort to using unofficial communications channels for allegations of abuse. These include the different whisper networks and the court of public opinion. The #MeToo movement has illustrated how women often use “whisper networks” with one another, which can allow survivors to share their accounts with select insiders.

The increased use of technology has helped further foster the use of those networks. They have been conducted through invite-only Facebook groups, for example, and sorority women at Yale University have used other platforms in a similar manner.

“The spread of technology has allowed traditional whisper networks to flourish, even in the absence of face-to-face encounters,” Tuerkheimer said. “And that’s because information can be disseminated rapidly across workplaces and large college populations.”

“We also, at the same time, have been seeing more and more of these informal disclosures, and then unfortunately some legal ramifications that come as a result of that,” Wachter said. “So what we wanted to do is provide a resource — being Deborah Tuerkheimer — to come and talk through what that could look like.”

Wachter added if people feel inspired after seeing Burke, it would be useful for them to also know the legal side of the #MeToo movement.

Some members of the audience, including Communication freshman Kara Toll, found the talk to be very informative and enjoyed learning about the legal side of the #MeToo movement.

Toll said she felt that it was very beneficial for her to go forward knowing more about these processes so that she can be a better ally to survivors.