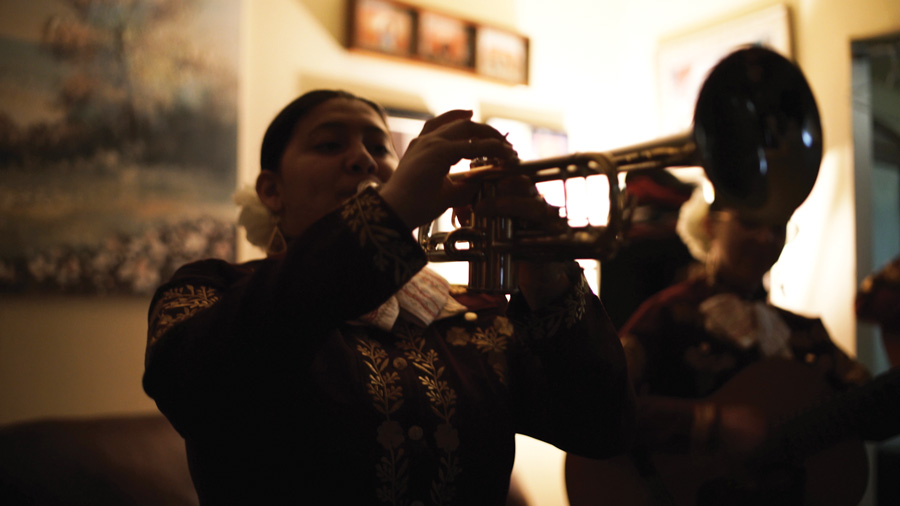 A still from “Dia de la Madre.” The short doc will be making its premiere at Sundance Film Festival

The moment Ashley Brandon (Communication MFA ‘17) and Dennis Hohne found out their film was submitted for Sundance was one neither will ever forget.

A self-proclaimed nerd, Brandon calculated the exact day she would hear from Sundance. But when the call came, she assumed it was a telemarketer.

When she ran into the next room, Hohne took one look at her face and said, “We either got into Sundance or someone died.” Luckily, it was not the latter.

Shot in one day, “Dia de la Madre” is a snapshot of the cultural lives of children from South America as they prepare a Mother’s Day mariachi band performance. Since neither director spoke a word of Spanish and had no budget, Brandon she resorted to Google Translate during editing to write English subtitles.

“Even though we had no idea what was being said, we were still out there filming and understanding what was happening,” Brandon said. “It was such an emotional experience that the story is beyond the barriers of language.”

Hohne said the crew was worried about overwhelming the young mariachi singers with their presence, but found that the children were excited to have their performances filmed and never felt threatened by the cameras. Hohne credits this to the choice to use smaller equipment and cameras that were less intrusive.

Hohne echoed Brandon’s concerns about the language barrier, but said while he was nervous at first of making the kids uncomfortable, the language ultimately was not as important as the unspoken words.

Brandon met Shinaar at Northwestern, where both were enrolled in the MFA in Documentary Media program. She said they clicked after working on a few projects together.

Shinaar cited Northwestern as the root of his and Brandon’s success. He said the technical and theoretical skills they acquired while in school taught him how to work with others by compromising and making peace within groups.

“Working with my classmates and professors, I learned it’s okay to be different in the stories I want to tell and this story is definitely different,” Brandon said. “You think of documentaries (as) sad stories. Being there taught me it’s okay to be playful with documentaries and blur the lines of fiction in a tasteful way.”

Hohne said he was in complete disbelief when Brandon told him the good news. It wasn’t until he saw it in writing that they had been accepted that he believed it, since they didn’t know anyone in the industry and had been going solo throughout filming.

Shinaar, however, never doubted the success of his best friends’ work.

“I always believe that every film I work on and every person I work with can reach for the stars,” Shinaar said.